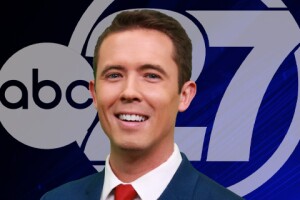 Channing Frampton joins the ABC 27 team after anchoring and reporting for three years in Southwest Florida at WINK News.

There, he went live from the eye of Hurricane Irma as the storm made landfall, earning him an Emmy nomination. He also covered the destructive wildfires and floods of 2017 along with the ongoing problem with the high price of prescription medicine.

He also worked as an award-winning anchor, producer and multi-media journalist in the Shenandoah Valley of Virginia before coming to Florida. There, he was also involved with the community serving meals on wheels and raising more than $10,000 for a nonprofit through Dancing with the Stars of the Burg.

The New Bethlehem, Pennsylvania native graduated from Robert Morris University in the Pittsburgh area in 2011 with a degree in media arts.