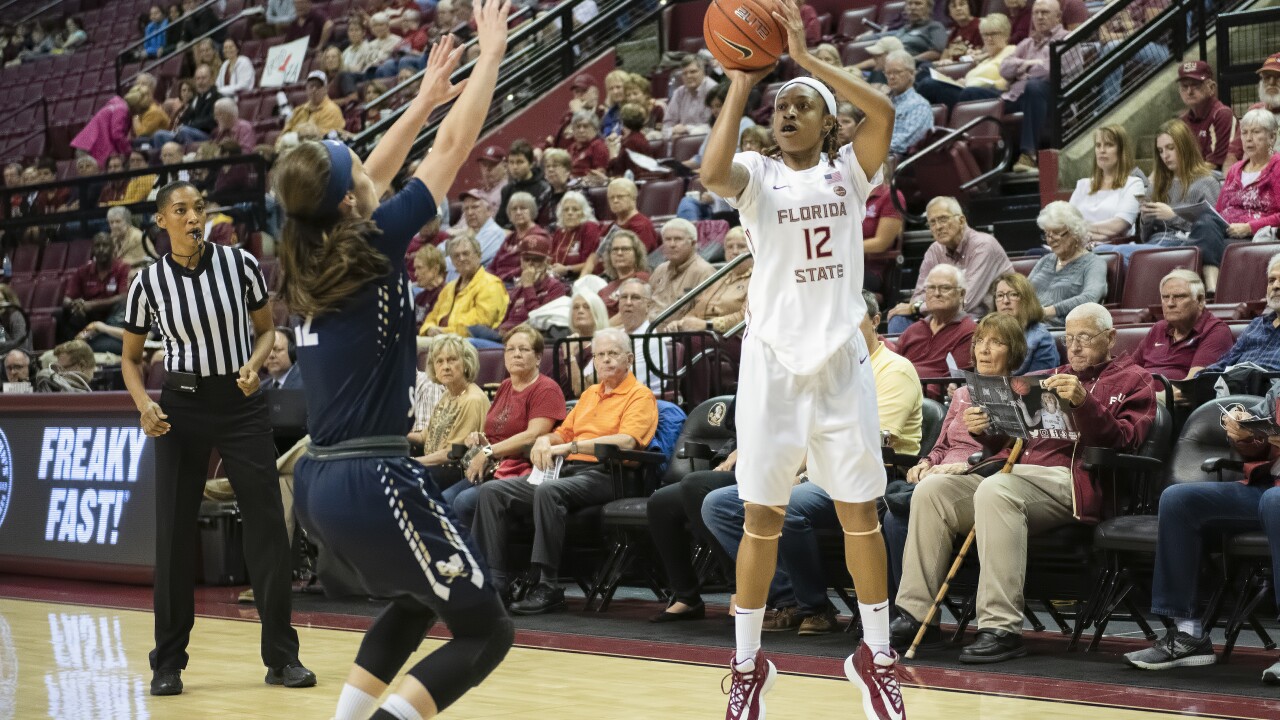 TALLAHASSEE, Fla. (Seminoles.com) – In their season opener against Charleston Southern, Florida State Women’s Basketball showcased why they were ranked 12th in the nation on the AP Top 25 Preseason poll, coming out strong with an 88-36 win over the Buccaneers for their fourth consecutive season-opening win. The triumph marked FSU’s 100th non-conference victory since the 2011-12 season.

“Didn’t know exactly what we were going to get tonight,” FSU Head Coach Sue Semrau said. “Thought we sputtered a little bit when we were trying to figure out what kind of shots we wanted to take, but once we got in a rhythm defensively, things changed. I thought our bench was tremendous, they came in and gave us a ton of energy. It was a good opener for us.”

The Seminoles (1-0) never trailed. The team opened up the scoring with a three-pointer from senior point guard Nicki Ekhomu, and took a lead that would not be challenged for the rest of the evening.

FSU closed out the first half on a 10-0 run, ending on four straight field goals with a Kourtney Weber buzzer-beating three-pointer to take a 41-22 lead.

The Seminoles broke away when they ended the third quarter on a 9-0 run, turning a 58-31 advantage into a 67-31 blowout. They ended the game on another explosive 17-0 run, putting the finishing touches on a 52-point edge in the victory.

An overall team effort propelled the Seminoles to their first win of the season, with four players in Kiah Gillespie (12), Ekhomu (18), Morgan Jones (14), and River Baldwin (13) all scoring in double digits.

“We just wanted to make a statement, wanted to win,” Ekhomu said. “I think my teammates really helped me get open shots and I think we just did great as a team and our toughness showed.”

Another Preseason All-ACC team selection in Gillespie demonstrated the strength of the Seminoles’ dominant core by collecting her 14th career double-double at Florida State. She grabbed 10 rebounds, two assists, and went 6-10 from the floor to tack on 12 points.

Jones picked up 14 points, with six rebounds and a career-high four assists.

Along with Baldwin, two of Florida State’s true freshmen in Sammie Puisis, and London Clarkson made quality contributions. Puisis drained her first 3-pointer off the bench and added six points with an assist. Clarkson got her first point from the free throw line, adding four points with two rebounds. The trio combined to score 23 of 88 points for the Seminoles.

Kicking off the season on a high note, it was a career night for several other returning Seminoles. Sophomore forward Valencia Myers tied her career high in assists with three and added five rebounds. Senior guard Nausia Woolfolk recorded four assists and a career-high three blocks with just one turnover. Weber went 2-3 from three-point range, tied her career high in rebounds with five and set a career high in steals, adding two.

FSU held their opponent to two second-chance points while totaling 19 of their own.

The Seminole defense forced the Buccaneers into a sloppy performance, as CSU produced just five assists to 15 turnovers, compared to Florida State’s 18 assists to 12 turnovers.

The team out-rebounded Charleston Southern 51-21, and held a sizeable advantage in the paint at 54-16.

“Yeah, I think having help on the post is really beneficial to us,” Gillespie said. “I think Valencia Myers had a lot of the load last year being our our sole five player, so I think having River Baldwin and London Clarkson come in and helping us be a post is very big for us,and I just think we’re just so big with them two on the floor.”

Florida State will travel to Baton Rouge to take on LSU at the Pete Maravich Assembly Center on Saturday, Nov. 9 at 2 p.m. ET. The game will be televised on the SEC Network+.