Williams, Forrest Slam No. 6 Noles Past No. 11 Cards 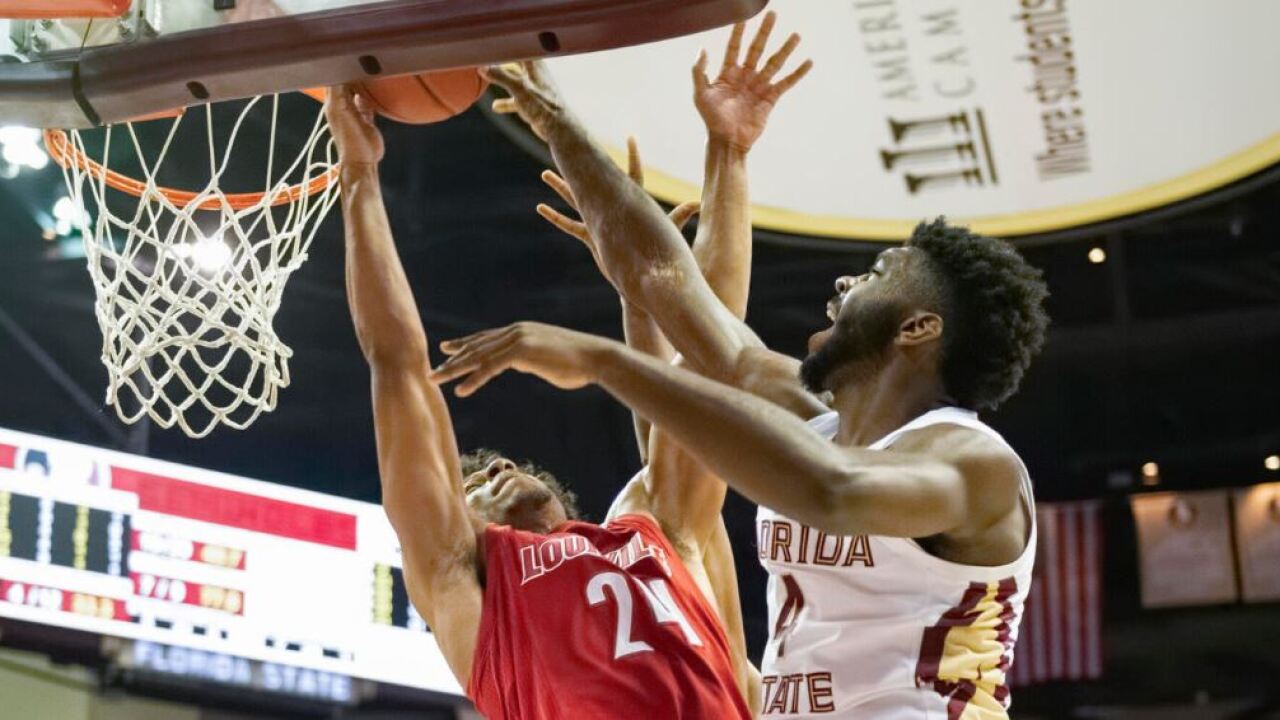 TALLAHASSEE, Fla. – Patrick Williams got his hand on the ball, and the whole building knew exactly what was coming.

With the Florida State men’s basketball team in the midst of a game-changing run that had erased a double-digit deficit and given the Seminoles a modest lead of their own, Williams grabbed a steal near the baseline and took off on a breakaway toward the basket.

As Williams reached top speed, each of the 11,500 fans in the sold-out Donald L. Tucker Center rose, in unison, in anticipation of what came next:

A leaping dunk that started near the free-throw line, thrown down in emphatic fashion that blew the lid off of the 39-year-old arena and gave the Seminoles more than enough to finish off an 82-67 victory over the No. 11 Cardinals on Monday night.

“The place went crazy once he dunked it,” said senior Trent Forrest, who had a team-high 16 points. “We basically had the crowd standing on their feet for the last 10 minutes of the game.”

And the guy responsible for it didn’t even hear it.

He said he never does.

“I didn’t hear anything,” said Williams, a freshman who finished with 11 points. “They told me it got really loud, but when I’m in the game I really can’t hear anything.”

The Cardinals certainly heard it. So, too, did the rest of the ACC and all of those bracket gurus projecting the matchups for next month’s NCAA tournament.

After sweeping Louisville for the first time in more than 40 years, FSU (24-4, 14-3) sits alone atop the ACC standings – a half-game ahead of Duke – and will likely be in the mix for the conference’s regular-season crown the rest of the way.

“I’m very proud of the guys. This was a very, very important game,” FSU coach Leonard Hamilton said. “And our plan was not to allow the game to be more important to Louisville than it was to us.

“But I have to give Louisville credit. They came out and played extremely well.”

Because, in the early goings of the second half, the Cardinals didn’t just seem poised to win the game. They seemed like they might deal the Seminoles a lopsided defeat.

Louisville led 40-32 at halftime – FSU’s largest home deficit at the break this season – and extended that lead to as many as 12 points.

When freshman Lamarr Kimble answered a quick 5-0 run by the Seminoles with a difficult 3-pointer, the Cardinals seemed to be in control.

What followed a few moments later was one of the more remarkable sequences of Hamilton’s 18 years in Tallahassee – a 15-0 run punctuated by Williams’ dunk that had the Cardinals shook and the Tucker Center shaking.

As is often the case, the Seminoles visibly wore down their opponents over the course of the second half.

Five Seminoles scored in double-figures, but none more than Forrest’s 16, and each of the nine players to log at least 12 minutes scored at least 12 points.

Then consider that Louisville’s two leading scorers at halftime – Jordan Nwora (11 points) and Ryan McMahon (nine) combined to score five in the second half.

Nwora, the ACC’s second-leading scorer, didn’t score after the break at all.

“When we had our backs against the ropes, we just found a way to make plays,” Williams said. “Like we’ve been doing all season. It’s nothing new.”

By the two-minute mark, the Seminoles led by double-digits and didn’t really need any more of those big plays.

Forrest gave them one anyway.

With Louisville pressing on defense in hopes of creating a turnover, FSU’s M.J. Walker sent a cross-body, cross-court pass to Forrest, who then angled toward the basket – and right into a collision course with the defending Nwora.

Forrest, perhaps one of the more mild-mannered Seminoles, might have on another night gone for a layup or simply attempted to draw contact and a pair of free throws.

But not on this night.

Forrest finished the dunk, drawing a foul in the process, and the Seminoles finished the game on an 11-3 run.

“He demonstrated how much that moment meant to him,” Hamilton said. “He bleeds garnet and gold. That’s him. He’s a Seminole, though. He represents what the ‘Unconquered’ spirit means to all of us.

“And I’m glad to see him having his moment in his senior year.”