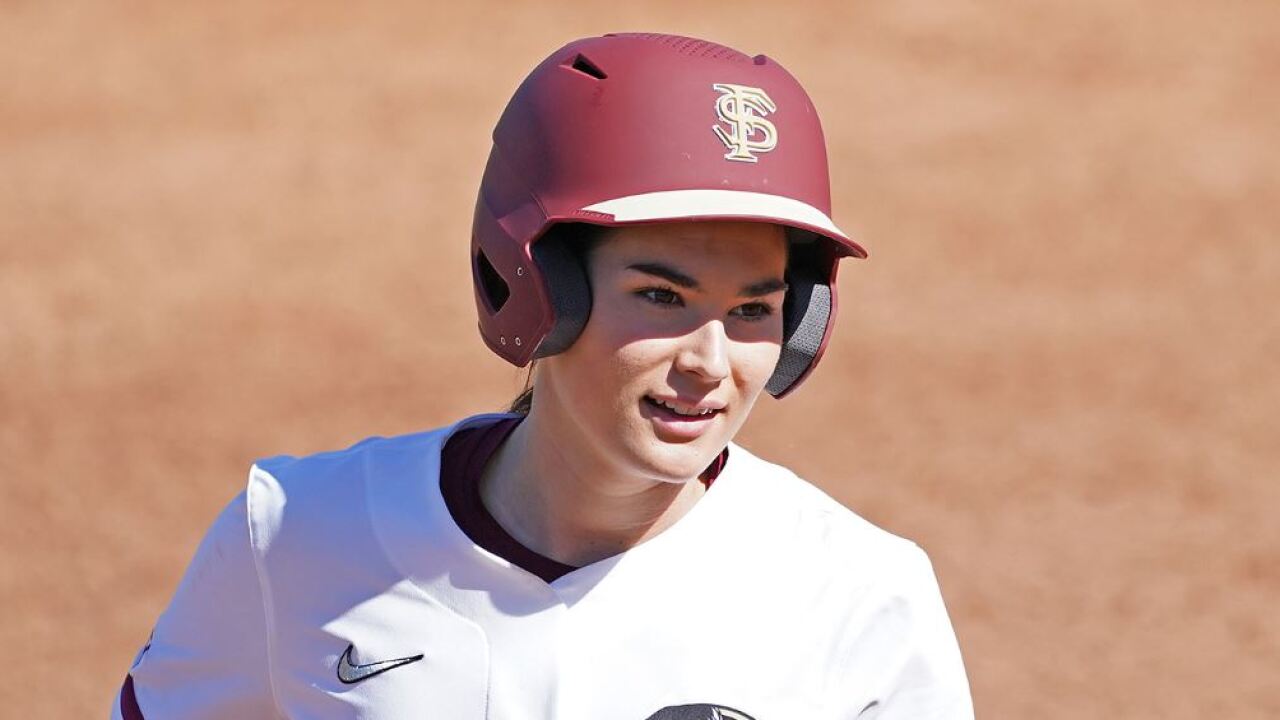 TALLAHASSEE, Fla. — There was production up and down the lineup on Wednesday night for the Seminoles as No. 5 Florida State (6-0) defeated Florida A&M (0-5) by a score of 10-2, in five innings. Ten different FSU batters had at least one hit, run scored or RBI on the evening, led by freshman Chloe Culp, who finished 2-for-2 with a triple, a home run and four RBI.

Prior to the game, FSU head coach Lonni Alameda and former FSU head coach JoAnne Graf led a presentation to honor the career of Florida A&M head coach Veronica Wiggins, who will be retiring after the 2020 season.

“What a special night to celebrate and honor a person that means so much to the game of softball and to Tallahassee,” said Alameda. “Coach Wiggins welcomed me with open arms when I came here and has been so involved with the NCAA and our coaches association, so it is nice to honor someone like that. Some of my most special moments over the years with her haven’t even been on the field, but when we run into each other at Publix and we’ll just sit in the aisle and talk softball. I just really appreciate that and love Tallahassee for that. It is a very small-town feel, but with big-time athletics on both sides for Florida State and FAMU.”

Florida A&M got runners on the corners with two away in the top of the first on an FSU error and a single, but Kara Bilodeau got out of the jam with a groundout to end the inning.

Kiersten Landers began the FSU first inning with an infield single and quickly stole second base. After a walk to Sydney Sherrill, her eighth of the season, Elizabeth Mason launched a home run off the scoreboard in right center to put the Seminoles in front, 3-0.

After a 1-2-3 second inning from Bilodeau, Florida State added a pair of runs in the second inning to push its lead out to 5-0. Freshman Devyn Flaherty led off with a single up the middle, stole second and came in to score on an RBI triple by fellow freshman, Chloe Culp. Culp later scored on a wild pitch for her sixth run scored of the season.

Kathryn Sandercock entered to pitch the third inning for Florida State and retired the Rattlers in order, while in the bottom of the inning, the Seminoles scored four more runs for a 9-0 lead. Mason opened the inning with a walk and stole second, while Anna Shelnutt followed with a walk and was pinch-run for by Maegan Tomlinson. Culp battled an eight-pitch at bat and finished it with a home run to center, her third HR of the season. Josie Muffley walked and was replaced by Morgan Noah, who quickly stole second base and later scored on an RBI single by Dani Morgan.

The Rattlers scored an unearned run in the top of the fourth to cut the lead to 9-1. An FSU error with two outs allowed Kyaira Jones to reach base and she scored on a ball in the left-center gap by Seriah Brokenborough.

Kaia LoPreste reached on a two-out error by Florida A&M in the bottom of the fourth and scored on a pinch-hit RBI triple by Savannah Parker as the sophomore hit it off the top of the wall in center to extend FSU’s advantage to 10-1.

A single, a walk and an RBI double allowed Florida A&M to add another run in the top of the fifth, but Cassidy Davis retired the final batter with a strikeout to close out the game, 10-2.

Sandercock (3-0) picked up the win after 2.0 innings of relief, giving up an unearned run on one hit. Bilodeau struck out two and allowed one hit in her 2.0-inning start, while Bianca Cruz gave up a run and a hit in 0.2 innings of relief.

The Seminoles will hit the road this weekend and travel to Clearwater, Fla., for the 2020 St. Pete/Clearwater Elite Invitational. Florida State will face No. 1 Washington, No. 2 UCLA, No. 13 Minnesota, No. 23 Northwestern and Liberty on February 14-16 at the Eddie C. Moore Complex. All of the games will be broadcast on the ESPN family of networks and specific information, along with links for the broadcasts and live stats, will be available on the softball schedule page of Seminoles.com.