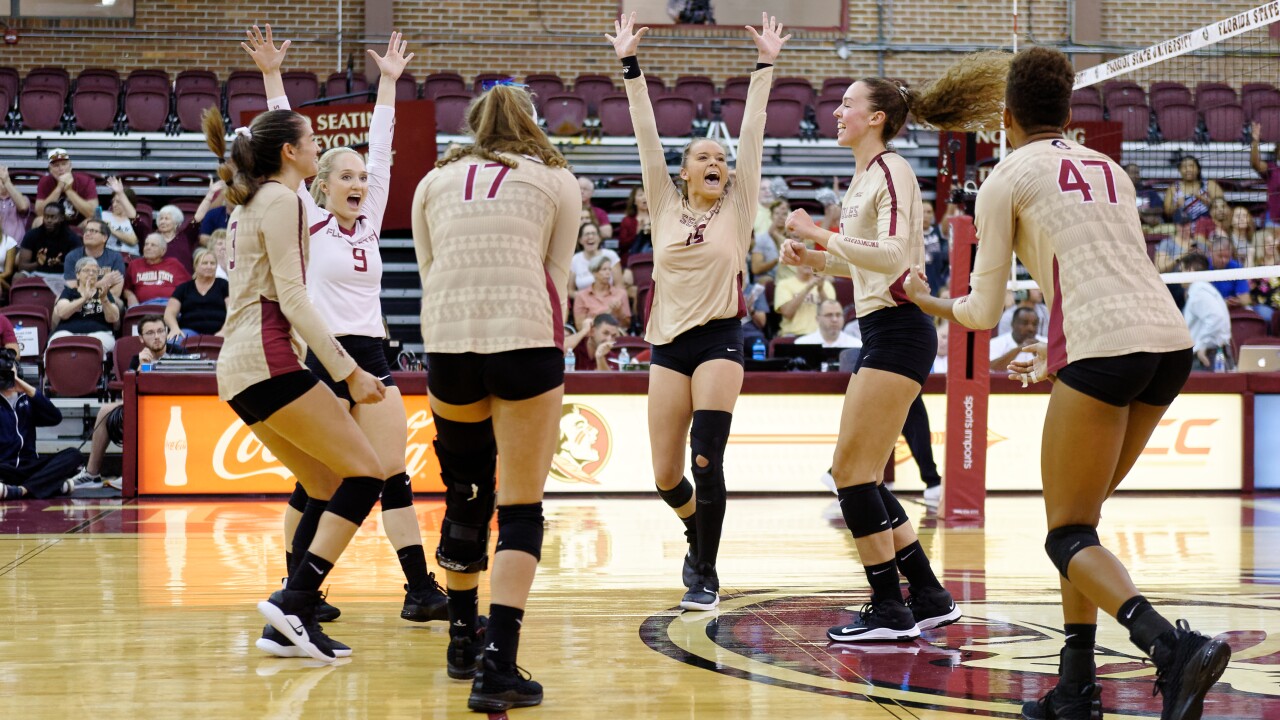 Four different Seminoles ended the match with double-digit digs, led by Payton Caffrey, who, along with her 15 digs, finished with a team-high 21 kills. It marked the fifth time this season that the senior outside hitter has recorded 20+ kills, including four in ACC play.

“It is important to find a way to win, especially when you are not playing as well as you want,” said FSU head coach Chris Poole. “I was disappointed in how we struggled like we did at times, and definitely give credit to Miami. They came out and played hard, kept us on our heels and we never really got into our rhythm. The defense was good and we scrambled around tonight. I told them in the fourth set that while we were not playing clean, we were hustling and playing hard. So we need to sharpen a few things, and it will be challenging with a pair of road matches this weekend.”

Miami jumped out to a 5-0 lead to begin the first set, but two kills each from Jasmyn Martin, Morgan Chacon and Caffrey helped give the Noles come back to take a 15-14 lead at the media timeout. Florida State used a 7-1 scoring run to open up an 18-15 lead in the middle of the set, before Miami rallied to it up at 19-19. A pair of kills by Martin down the stretch secured the first set for the Seminoles, 25-21.

The Hurricanes scored six of the first eight points in the second set, but the Noles used kills from Caffrey and Emma Clothier, along with a block by Marissa Stockman and Taryn Knuth to get within one at 13-12. Miami pushed the lead back to three before FSU tied the set at 18-18 on an assisted block from Martin and Clothier. The Hurricanes closed out the second set with a 6-2 run to tie the match with a 25-21 set win.

It was back and forth to begin the third set, and despite kills from Knuth and Deja Williams, neither team was able to lead by more than one until a Seminole attacking error made it 10-8 Miami. Florida State tied the set at 13-13 after three consecutive kills by Caffrey, but Miami scored the next four points to regain the lead. An ace by Lily Tessier and a kill by Clothier helped the Noles square the set again at 19-19. Miami scored four of the next five points for a 23-20 lead, but a solo block and a kill from Chacon, along with a block from Knuth and Williams tied the set at 24-24. The Seminoles held off a total four set points from Miami before Caffrey’s 16th kill of the match secured the third set for FSU, 29-27.

Several scoring streaks highlighted the start of set four, as the Noles scored three in a row to lead 4-2 after kills by Clothier and Caffrey, along with a service ace by Tessier, which Miami followed with a 4-0 run. Florida State topped that with five straight points on kills by Martin, Chacon and Clothier to take a 9-6 lead in the set. The Noles went on a 6-0 run, including three straight blocks involving Knuth, Williams and Chacon to take an aggressive 16-8 lead in the set. Miami battled back to cut the lead to four at 17-13, but the Noles pushed it back out to 20-13 on a kill by Clothier that was initially blocked, but the ball came back to Clothier, went off her head and over the net for her ninth kill of the match. After Miami held off three match points from the Seminoles, a kill by Knuth ended the match with a 25-21 win.

Tessier finished with a career-high 11 digs, along with 26 assists on the night, while Chacon (13) and Taylor Roberts (11) also had double-digit digs. Adrian Ell added two aces and finished with 23 assists. Knuth continued her success on the attack, posting a .467 hitting percentage with eight kills and just one error, while the junior finished with a team-high eight blocks.

The Seminoles will hit the road this weekend for matches at Virginia Tech (9-14, 2-8 ACC) and High Point (16-9, 8-1 Big South) on November 1-2. FSU will play the Hokies on Friday at 6:00 p.m., while taking on the Panthers on Saturday at 1:00 p.m. Links for the broadcasts and live stats will be available on the volleyball schedule page on Seminoles.com.