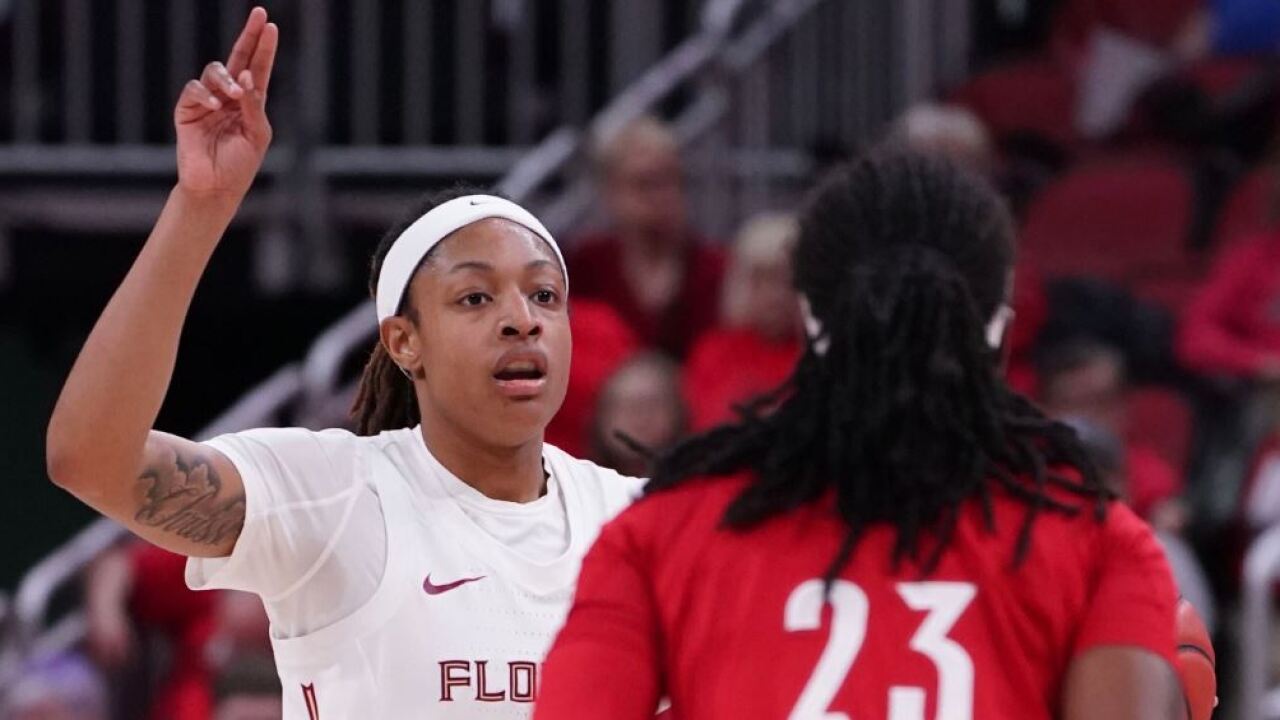 LOUISVILLE, Ky. (Seminoles.com) – Start-to-finish defensive determination and a 13-0 fourth quarter run proved decisive as 17th-ranked Florida State took down No. 5 Louisville, 67-59, in front of a KFC Yum! Center crowd of 8,314.

Kiah Gillespie scored 25 points and grabbed 13 rebounds, while Nicki Ekhomu added 18 points and dished out six assists as the Seminoles (19-4, 8-4 ACC) snapped the Cardinals’ 13 game winning streak and handed them their first ACC loss of the season.

The Noles held Louisville to a season-low scoring total as the Cardinals shot just 34-percent from the floor and were out-rebounded 44-38. It marked the fifth win in the last seven meetings against Louisville, including a 50-49 road win in 2018 when the Cardinals were ranked No. 2.

Florida State is now 5-1 against Top-25 opponents this season.

“They played with toughness; they played with heart,” FSU coach Sue Semrau said. “After a really tough stretch and losing Nausia [Woolfolk] to the ankle and losing to BC, I think they’ve responded pretty well. That’s a really good Louisville team we just beat.”

Good indeed. It had been two months and a day since the Cardinals (21-2, 10-1) last tasted defeat, but the Noles were ready from the opening tap.

“We talked about how we deserved to be here,” Gillespie said. “We’ve had a couple of tough losses in the ACC where we didn’t put our all into the game. We went out there and played and thought things would go our way because we were Florida State and we were ranked. We learned quickly that we have to come out and have an attitude that we deserve to be here. We have to defend and rebound and talk and be a team altogether.

“We stayed together and didn’t splinter, and that’s huge for us and huge for our growth, especially from the team we were last year.”

That togetherness showed after Louisville’s Kylee Shook drained a jumper to start the fourth quarter, tying the game at 42-all. Valencia Myers scored in the post to start the decisive run, followed by consecutive 3-pointers by Ekhomu, Woolfolk and Gillespie.

The barrage came out of nowhere for the Noles, who were just 3-of-17 from beyond the arc up until that point. And they weren’t done. Gillespie added a jump hook for a 55-42 lead to cap the run with 6:05 remaining.

The Cardinals answered with a 7-0 run as the Noles endured a scoring drought of more than two minutes, but Semrau’s crew closed out the game by draining all 10 of its fourth quarter free throw attempts. FSU finished 13-of-14 from the line.

Woolfolk scored nine of her 11 points in the final quarter, including 6-for-6 shooting from the line.

“So proud of them,” Semrau said, when asked about the free throw shooting down the stretch. “They took it on themselves and they put the time in, and they needed to. That’s something you can’t really practice; that pressure free throw, you’ve got to do it yourself.”

Semrau made a point to let her team know that building on this win moving forward is even bigger still. Gillespie got the message.

“We’ll use this game to be happy and celebrate; not really overlook it,” said the senior forward, who recorded her 23rd career double-double. “But moving forward, we have to string games along together in February. Celebrate this, but get back in the gym and keep working hard.”

There will be plenty of positives to look back on from Thursday night.

Ekhomu scored nine of her 11 first half points in the second quarter, including a 3-pointer to open up the Noles’ first 10-point lead and a runner with two seconds remaining for a 26-17 halftime lead.

FSU’s defense limited Louisville to a season-low first half total as the Cardinals shot just 24 percent from the floor, including 1-of-8 from 3-point range. The Noles also dominated the glass, out-rebounding their hosts by a 29-16 margin. Gillespie had 10 of those in the first 20 minutes, to go along with nine points.

The teams were deadlocked at 11-all after one quarter, marking the fewest first quarter points of the season for the Cardinals.

The Seminoles return to action at home on Sunday (12 p.m.) against Virginia.