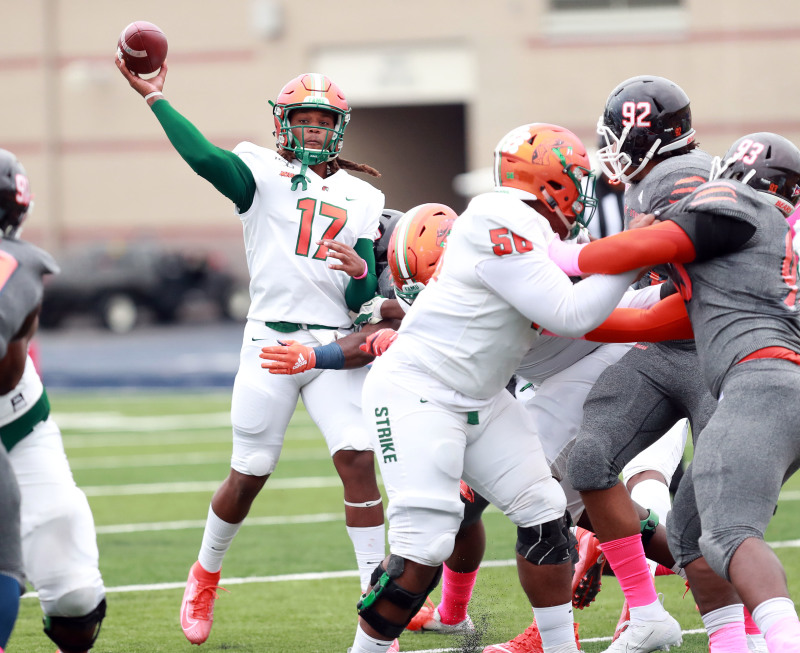 On a cool dreary day, Rasean McKay started in replace of Ryan Stanley at quarterback and the redshirt freshman went 25 of 35 passing, with one touchdown and one interception. He completed passes to six different receivers as the Rattlers picked up the road victory.

After both teams traded punts to begin the game, Morgan State broke the early 0-0 tie as E’Munn Parker caught a 27-yard touchdown pass from DeAndre Harris to give the Bears a 7-0 lead with 9:21 left in the opening period.

Florida A&M (7-1 overall, 5-0 MEAC) responded with a 10-play, 70-yard drive as backup quarterback Rasean McKay completed a 3rd-and 13 to Xavier Smith for a first down, and two plays later, Davonne Kendrick scored on a 3-yard run, tying the game at 7 with 5:26 remaining in the first quarter.

After a big defensive stop on fourth down, the Rattlers marched 33 yards in seven plays as Yahia Aly booted a 50-yard field goal to give FAMU a 10-7 lead just four seconds into the second quarter.

Florida A&M’s defense accounted for its next touchdown.

With the Bears moving into FAMU territory, Bob Jonjo was hit hard by Eric Smith and Terry Jefferson picked up the loose ball at the 50 and run down the left sideline for the score, giving the Rattlers a 17-7 advantage with 12:26 remaining in the first half.

The Rattlers answered the MSU scoring drive with an 8-play, 72-yard drive, giving FAMU a 24-10 lead with 33 seconds remaining in the quarter.

During the drive, Smith rushed 17 yards as he received the ball going to his left, then cut back and reversed field and turning what would have been negative yardage into positive yards for a first down. FAMU capped the drive five plays later as McKay tossed a 21-yard touchdown pass to Terrell Jennings as the Rattlers extended the advantage to 24-10 with 33 seconds left in the quarter.

After a scoreless third quarter, the Rattlers were forced to punt, and Chris Faddoul’s kick was blocked as the ball rolled out of the back of the endzone with Morgan State cutting the deficit to 24-12 with 14:50 remaining.