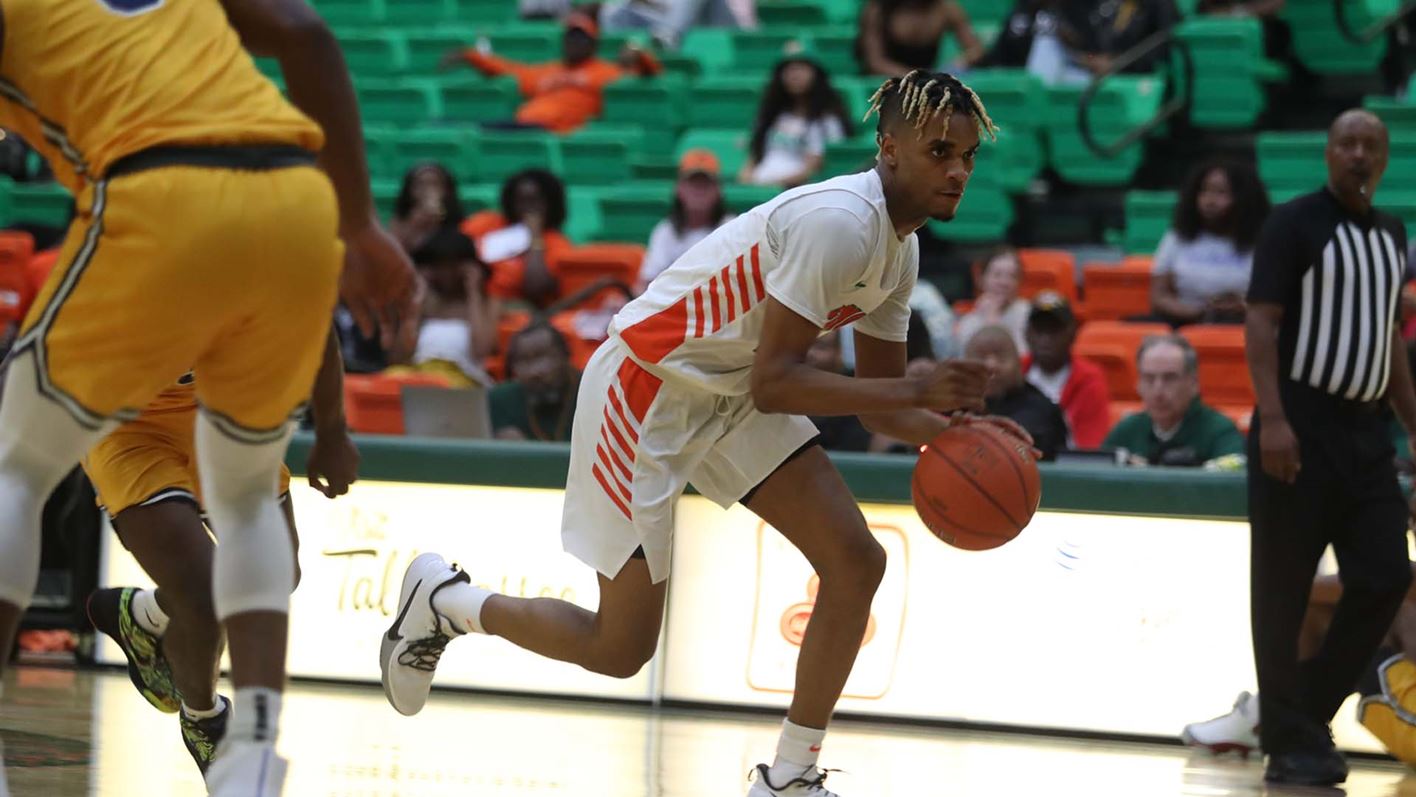 HOW THE GAME UNFOLDED
The first quarter saw both teams come out struggling on both ends, with the two clubs battling to a 12-12 tie after 10 minutes.

FAMU opened the second period on a 7-0 run to vault out to a 19-12 lead, forcing Coppin State to call timeout. Coppin answered with a 4-0 run to cut the Lady Rattler lead to 19-16, before Shalunda Burney-Robinson splashed a 3-pointer to put the Lady Rattlers ahead, 22-16 with 6:28 left in the half.

WHO'S GOT NEXT?
The Lady Rattlers will have a split weekend this week, playing Saturday at South Carolina State (2 p.m.) in Orangeburg, S.C., befofe returning to the Al Lawson Center for a 2 p.m. matinee against North Carolina Central.

TALLAHASSEE, Fla. | MJ Randolph finished with a double-double as the Florida A&M University men's basketball team completed its home sweep with a 65-54 victory over Coppin State in a Mid-Eastern Athletic Conference (MEAC) game on Monday night during Faculty and Staff Appreciation Night.

The Rattlers (4-11 overall, 2-2 MEAC), who defeated Morgan State on Saturday afternoon, led by as many as 15 points (26-11) with 45 seconds left in the first half and held Coppin State to just five field goals (17.9 percent), while taking a 27-13 advantage into break. Florida A&M never trailed in the second half in picking up its second consecutive conference victory.

Randolph finished just one point shy of his career high with 21 and posted a career-best 15 rebounds, along with a game-high six assists to pace FAMU. Evins Desir added 13 points and four rebounds, while DJ Jones tallied 10 boards, three points, two steals, two blocks and one assist.

How It Happened
After a slow start for both teams, Florida A&M got some distance with back-to-back buckets by Brendon Myles and Bryce Moragne to grab a 13-6 advantage with just over 12 minutes left in the opening half.

The Rattlers extended the lead to 19-8 after a Myles layup with 8:19 left, forcing Coppin State head coach Juan Dixon to call a timeout.

Free throws by MJ Randolph and Kamron Reaves pushed the advantage to 24-10 with 2:12 remaining in the half.

Florida A&M extended the margin to 56-42 after a Nasir Core 3-pointer, but Dejuan Clayton answered at the other end and Coppin State closed the gap to 56-48 after an Aaron Robinson trey with 5:30 left.

The Eagles got a 3-pointer by Reggie James with 2:07 remaining to close the gap to 61-53, but that would be as close as Coppin State would get.

Inside the Numbers
> Florida A&M shot 46.3 percent (25-of-54) from the floor and 70.6 percent (12-of-17) from the charity stripe
> Coppin State was 19-of-54 (35.2 percent) from the field and 7-of-23 (30.4percent) from the foul line
> FAMU registered 347 rebounds, including 39 on the defensive glass
> CSU pulled down 30 rebounds, with 26 coming on the defensive end
> The Rattlers finished with 22 points in the paint, 16 bench points, eight second-chance points, five points off seven CSU turnovers and two fastbreak points
> The Eagles recorded 18 points in the paint, 15 points off 17 FAMU turnovers, 10 bench points and five second-chance points

News and Notes
> Coppin State holds a 37-23 overall record in the series, but has dropped its last two to FAMU
> FAMU improved to 14-8 at home during the Robert McCullum era
> The Rattlers also improved to 11-15 overall against Coppin State at home
> Monday marked Faculty and Staff Appreciation Night
> MJ Randolph's previous career high in rebounds was 10 against North Carolina A&T State earlier this season
> Florida A&M has faced two nationally-ranked programs so far this season – #10 Seton Hall and No. 21 Tennessee
> FAMU picked up a signature victory on Dec. 31 against Iowa State (70-68)
> The Rattlers have only played two of their 15 games at home this season
> Florida A&M has travelled 24,068 miles this season and will have an additional 830 miles with trip to and from Orangeburg, S.C. over the weekend

Up Next
Florida A&M returns to the road to take on South Carolina State on Saturday. Tip-off against the Bulldogs is scheduled for 4 p.m. at the Smith-Hammond-Middleton Memorial Center in Orangeburg, S.C.