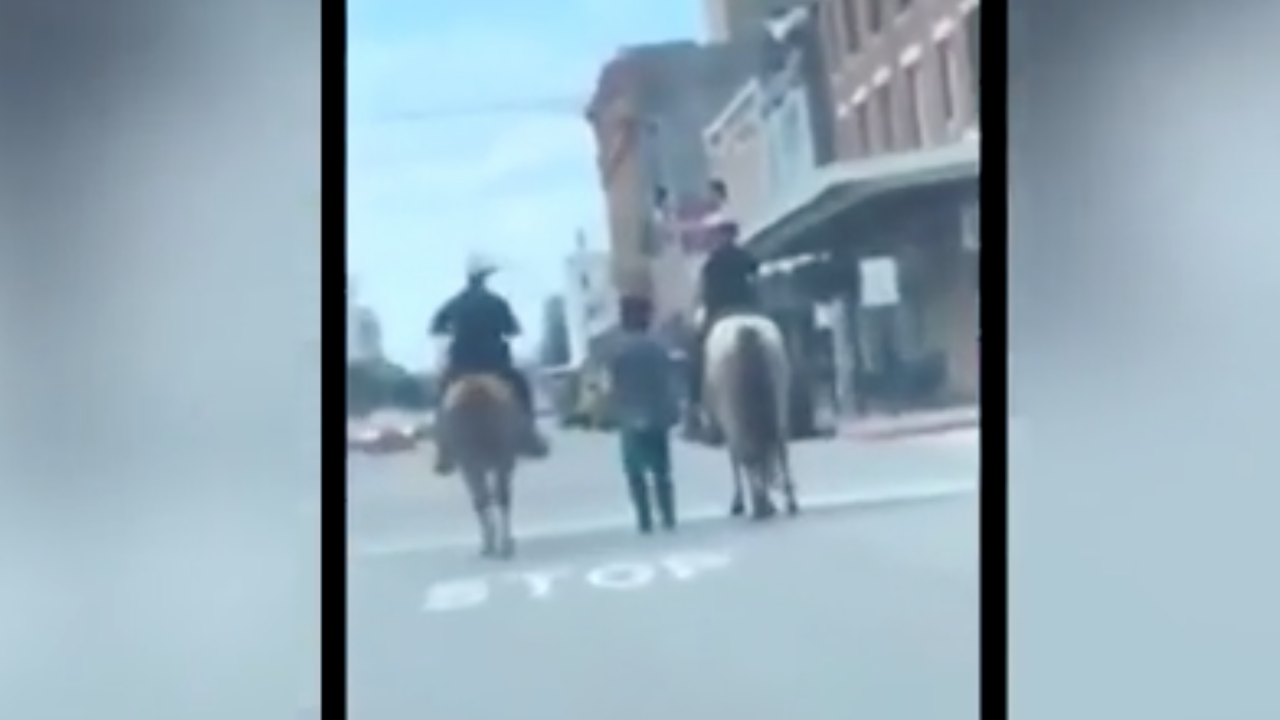 The Galveston Police Department chief has already apologized for the way that two mounted officers escorted a handcuffed African-American man over the weekend.

But the leaders of two police unions came to the arresting officers' defense on Thursday, saying they did nothing wrong.

"Contrary to what some have said, these officers did not use poor judgment. They did exactly what they are trained to do," said Kevin Lawrence, the Executive Director of the Texas Municipal Police Association.

"There are no good optics when making an arrest or detaining a suspect," Lawrence added.

Geoff Gainer, President of the Galveston Municipal Police Association, similarly said this arrest technique is an accepted practice across the country.

"It is race and gender neutral. It is a universal technique meant to protect the individual being escorted, as well as the public," Gainer said.

The joint statement from the two police union leaders comes days after photos showed two officers leading Donald Neely, 43, with a long cord. Police said the officer is holding a "line" that was clipped to the man's handcuffs, not a rope.

Neely had been arrested and charged with criminal trespass Saturday, according to police, and he was released Sunday.

After photos of the arrest were posted online, Galveston police apologized to Neely for causing the man "unnecessary embarrassment."

"While this technique of using mounted horses to transport a person during an arrest is considered a best practice in certain scenarios, such as during crowd control, the practice was not used correctly in this instance," police said in a statement.

There was no transportation immediately available at the time of the arrest, police said.

In a statement, Galveston Police Chief Vernon L. Hale III apologized to Neely and said his officers "showed poor judgement in this instance." He added that the department has "immediately changed the policy to prevent the use of this technique."

Gainer followed all training and protocols provided to them, and he criticized the training protocol rather than the officers.

"We believe the Chief said it best during his town hall meeting when he said this was a failure of training and policy," Gainer said in a statement. "We support the Chief in his review of the policy and procedures and are confident he will make the necessary changes."

At a press conference in Galveston before the meeting, civil rights attorney Benjamin Crump, who does not represent Neely's family, criticized the police department.

"When they drag Donald Neely down the road by horses and rope, it was like they (were) dragging our entire community down the road," Crump said.

"This is not 1819. This is 2019. And that image projected back to 1819, as if those were the fugitive slave hunters, and that Donald Neely was a slave being ... with horse and rope brought down the street," Crump said.

"This is the behavior in 2019 that we have to deal with. Unfortunately, these police officers lacked the judgment, and the fitness to decide that this imagery that comes from the way that they handled Mr. Neely is painful, and that it just ... just dredges up all of these painful memories of the past."

Morris said Neely had been homeless for about seven years. He suffers from bipolar disorder and is not taking medication to treat it, Morris said. Crump said police knew Neely suffered from a mental illness.

Adrienne Bell, a candidate for Congress who provided the photos to CNN, said the department's quick response was "truly appreciated" but that many in the community have questions about transparency, community policing, accountability and arrest procedures.

Bell had previously posted on social media that it was hard for her to understand "why these officers felt this young man required a leash, as he was handcuffed and walking between two mounted officers."

"It is a scene that has invoked anger, disgust, and questions from the community," she said on Facebook.