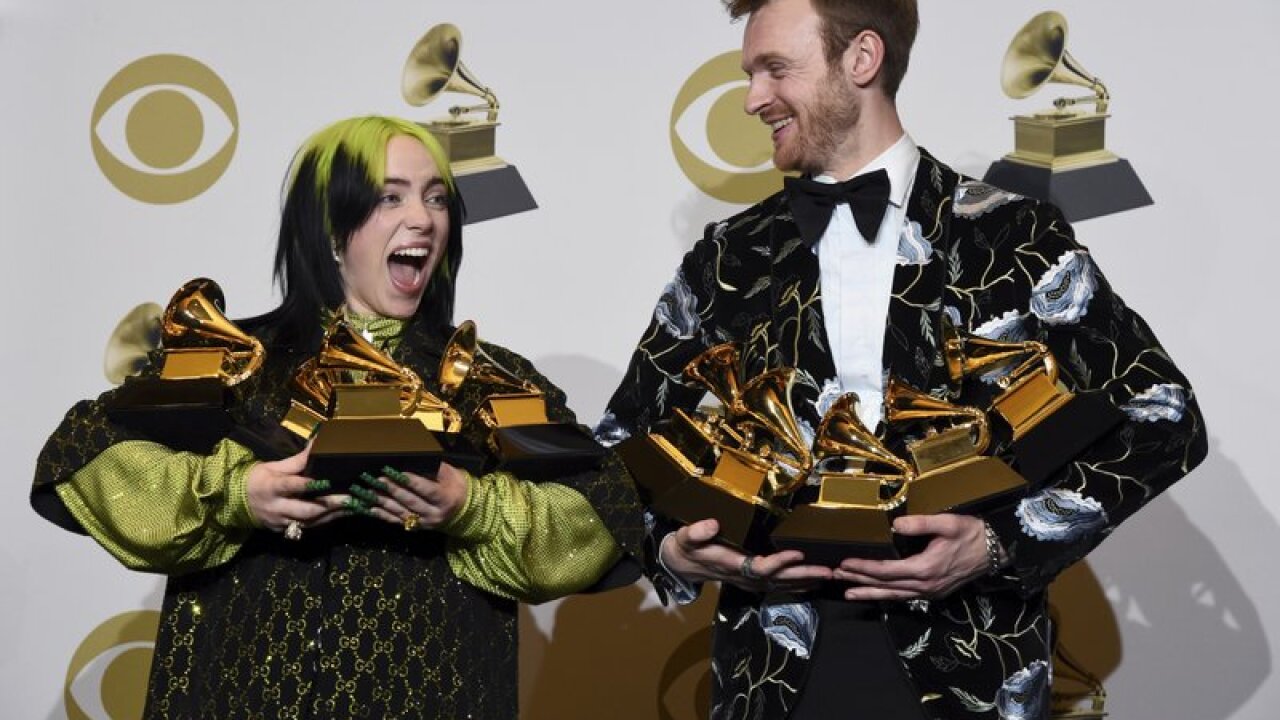 The edgy, avant-pop album that siblings Billie Eilish and Finneas created in a small bedroom made a big splash at the 2020 Grammy Awards, winning 11 honors for the musical family.

“When We All Fall Asleep, Where Do We Go?” — created in the musicians’ Los Angeles home — helped Eilish win the top four honors, including album, song and record of the year, along with best new artist. The 18-year-old is the youngest artist to achieve the feat and the first to do so since Christopher Cross did in 1981.

Finneas — who co-wrote, produced and engineered the album, walked away as Sunday’s top winner with six. Eilish won five honors.

Billie Eilish.“We didn’t write a speech for this because we didn’t make this album to win a Grammy. We didn’t think it would win anything ever. We wrote an album about depression and suicidal thoughts and climate change and being the bad guy — whatever that means — and we stand up here confused and grateful,” Finneas said onstage.

“This is to all the kids who are making music in the bedroom today — you’re going to get one of these,” Finneas added.

The bedroom where they created magic was brought to life when they hit the stage and performed “When the Party’s Over,” which featured Finneas on keys and Eilish singing in a soft, pitch perfect tone.

The Grammys kicked off with a performance in honor of Bryant, who died hours before the awards along with his daughter and seven others . And later in the show Hussle’s collaborators and friends, including DJ Khaled, John Legend, Meek Mill, Kirk Franklin, Roddy Ricch and YG, gave an all-star tribute to the man who died last year.

“This is for Nipsey Hussle. This is for hip-hop,” said DJ Khaled, who collaborated on the song with Legend and Hussle, whose family stood onstage.

“We all love him. We all miss him. It’s terrible that we had to lose him so early,” Legend said. “We’ve seen some tragedy today and last year ... let’s hold each other tight.”

Boyz II Men and Alicia Keys.The show — which took place at the Staples Center, Bryant’s old stomping ground — began with a touching, emotional and a cappella performance of “It’s So Hard to Say Goodbye to Yesterday” by host Alicia Keys and Boyz II Men.

“Los Angeles, America and the world-wide world lost a hero,” Keys said, adding that the audience was “heartbroken in the house that Kobe Bryant built.”

“Right now Kobe and his daughter Gianna ... are in our spirits, they’re in our hearts, they’re in prayers, they’re in this building,” she said. “Take a moment and hold them inside of you and share our strength and our support with their families.”

Lizzo.Before the show officially honored Bryant, Lizzo performed the songs “Truth Hurts” and “Cuz I Love You,” saying at the top of the show: “Tonight is for Kobe.”

“Hold on one second,” she said, catching her breath. “Thank you to the academy. This is really (expletive) sick.”

“To my mother, you did a great job raising this guy,” Tyler, who won best rap album, said to his mom, who was onstage and crying by side.

Demi Lovato, who has mostly taken a break from the public since focusing on her recovery after reportedly overdosing in July 2018, gave a stirring, vocally top-notch performance that earned her a standing ovation. She was so emotional that she had to restart the song as a teardrop ran down her cheek.

Camila Cabello’s performance of “First Man” — a song dedicated to her father — also induced tears. Cabello walked off the stage to her dad’s seat to finish singing the song in front of him, while he teared up. Audience members were emotional, too, including Gwen Stefani.

Ariana Grande had a lengthy performance — probably to make up for the drama that surrounded her axed performance last year. Run DMC joined forces with Aerosmith to rock the Grammys stage, while Usher, Sheila E. and FKA twigs paid tribute to Prince.

Calmatic and Lil Nas X.Lil Nas X brought the story of “Old Town Road” to life by performing alongside the artists who helped the song stay at No. 1 for 19 weeks through various remixes, including BTS, Mason Ramsey, Diplo and the track’s main co-star, Billy Ray Cyrus.

Veteran rapper Nas then joined Lil Nas X for a new song, shouting out Bryant at the end: “Kobe, we love you.”

A dark cloud loomed over ceremony since the Recording Academy announced it had put its recently hired CEO, Deborah Dugan, on administrative leave for misconduct. Dugan and her lawyers fired back at the academy, claiming that the awards show is rigged .

But no mention of Dugan was directly made during the three-plus-hour show.