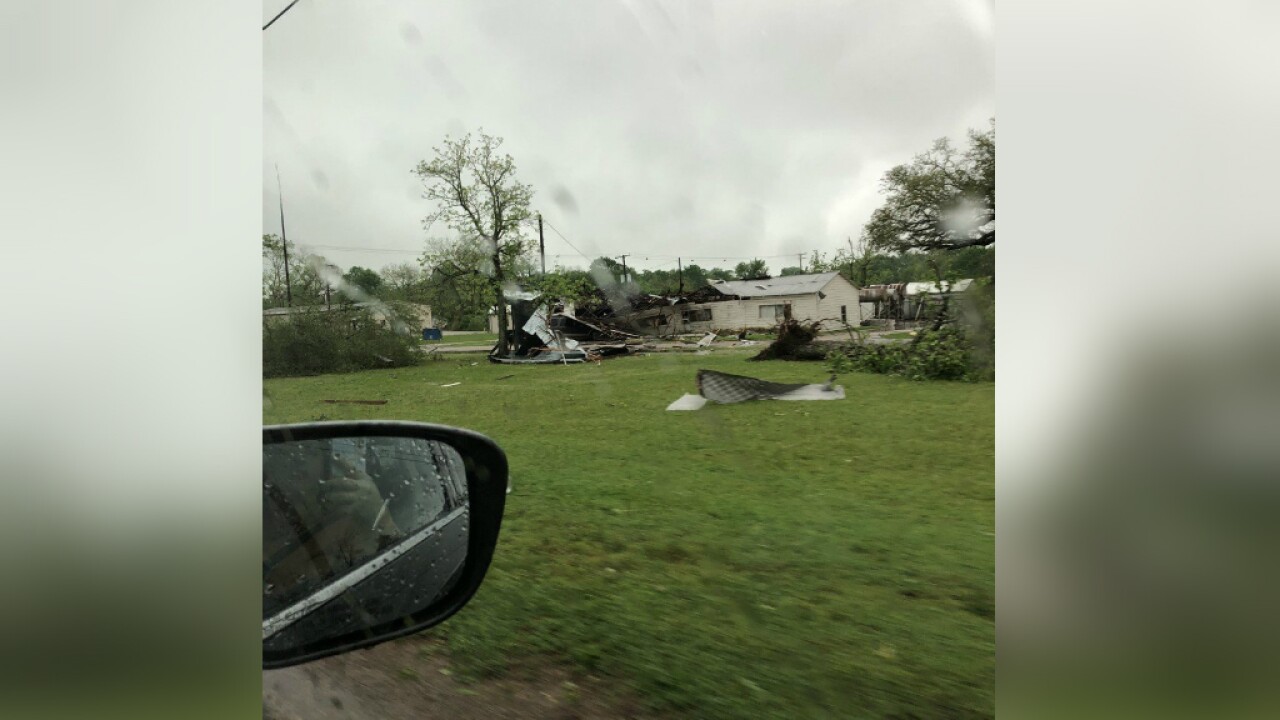 Storms hammered east Texas on Saturday, with two children killed when a tree fell on a car, authorities said.

The children, ages 3 and 8, were in the back seat with their parents in the front when the tree fell on their vehicle around 3 p.m., said Angelina County Sheriff's Department Captain Alton Lenderman. The children were pronounced dead at the scene.

A preliminary damage survey found that a tornado with peak intensity of EF-3 and winds up to 140 mph touched down in Robertson County, according to a tweet from the National Weather Service in Forth Worth.

There were reports of multiple injuries in the Robertson County town of Franklin, the NWS said, and CNN affiliate KWTX reported widespread damage there. Trees were pulled up by the roots, roofs torn off buildings, and the cinder block foundation was all that was left of a mobile home in the town, which is southeast of Waco.

The entire town of Franklin and neighboring Bremond lost electricity, with power expected to be restored Saturday night.

To the north, dime-sized hail pounded the Dallas-Fort Worth area.

Texas is seeing the beginning of the dangerous and severe storms forecast to slam parts of the Southeast and Ohio River Valley this weekend.

The powerful system will create the potential for life-threatening winds, strong tornadoes and large hail.

The Storm Prediction Center has issued a moderate risk (level 4 out of 5) for severe weather Saturday across parts of the Lower Mississippi Valley.

And Sunday, an enhanced risk (level 3 out of 5) stretches from Atlanta to Cleveland.

CNN meteorologist Chad Myers said the warm air present during the afternoon enhanced the atmosphere's instability, creating more energy for storms to tap into and aiding in their development.

He said the threat for severe weather is greatest at such times.

The storms most capable of producing tornadoes and large hail will be the individual, rotating cells that form ahead of a larger complex of thunderstorms.

By late Saturday, the storms were expected to organize into a line as they cross the western border of Mississippi.

The system will begin to move through Alabama overnight and is expected to reach Georgia by Sunday morning.

The energy from warm afternoon temperatures will diminish, but the risk for tornadoes will not be over.

"The storm is so vigorous that tornadoes are still possible after dark," Myers said.

Tornadoes at that time can be especially dangerous since they are difficult to see and people are less likely to receive warnings while they're asleep.

The most significant risk of severe weather is expected Saturday, but there's still considerable potential Sunday.

The Storm Prediction Center issued an enhanced risk across a broad area, stretching from eastern Alabama through the southern Appalachians and into the Ohio Valley. The main line of storms will begin to push into this area late Sunday morning and trek to the east on Sunday afternoon. The center said it expects the threat of severe weather to increase throughout the afternoon.

"Damaging winds appear to be the greatest threat on Sunday, but tornadoes will also be possible," CNN meteorologist Dave Hennen said.

The risk will slowly diminish as the system begins to weaken Sunday evening.

Sunday tee times moved up at The Masters

Georgia's Augusta National Golf Club is included in the slight risk area Sunday as the Masters golf tournament concludes. Tournament organizers have moved up tee times for Sunday because of the storm threat.

The storms are expected to move through the Augusta area during the afternoon and evening.

The tornado threat will be lower by then, but damaging winds could still present hazardous conditions.