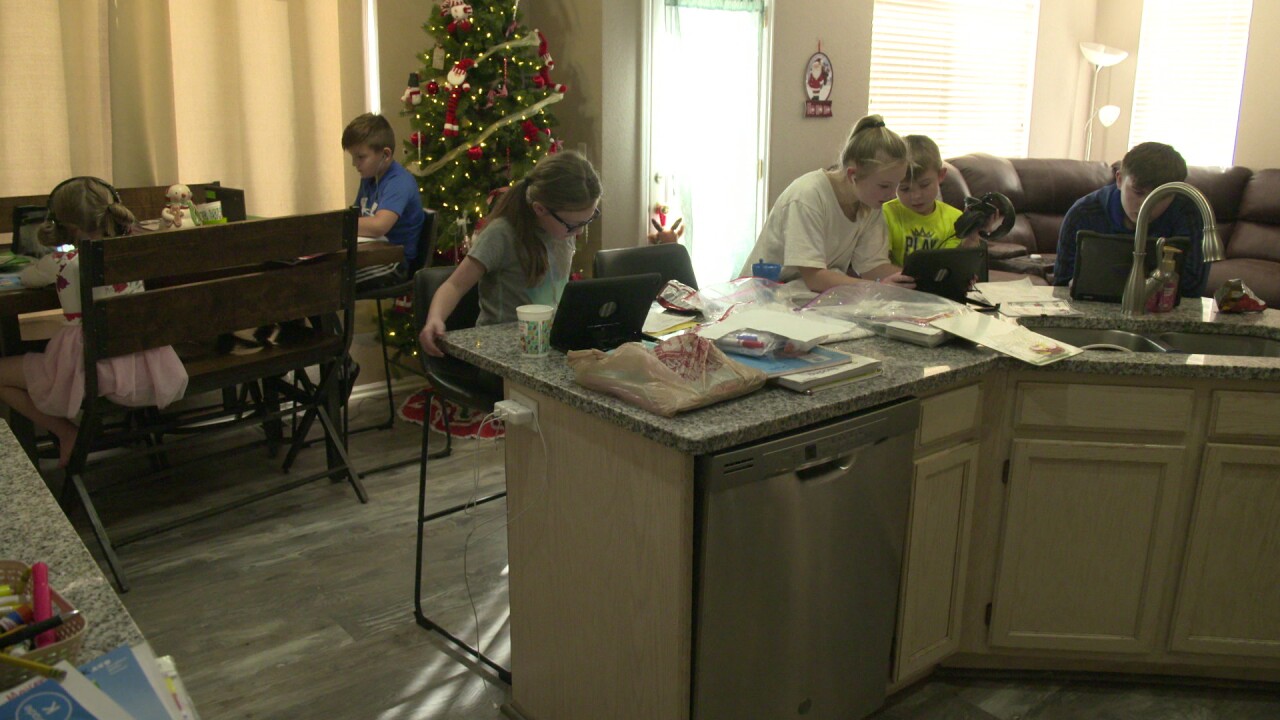 ARVADA, Co. — The Robinson home is now a cafeteria, a classroom and a gym.

The family’s six children are in five different grade levels, spanning from kindergarten to high school. At the beginning of the school year, some of the kids did in-person learning for part of the week.

“I was very grateful when they were able to go to school,” said the mother of six, Alexi Robinson.

With COVID-19 cases spiking this winter, all six are indefinitely back to remote learning. The decision dropped a heavyweight on Robinson.

“I was like, ‘Close the restaurants, close the mall, close everything. Just please let's keep the kids in school,’ because it's, it's just so hard. It's so hard and so frustrating. I just want to, just break down and cry,” said the mother.

Robinson and her husband both work full-time to support their family.

“I leave before they're awake for the day. My husband is gone sunup to sundown every day. He travels a lot out of town as well,” said Robinson.

Robinson says her older kids have been taking on the teaching role while she and her husband work.

“I couldn't do it without them, but then I don't want them to suffer either. They get reprimanded by their teachers, you know, if they're late or if they leave for a second or whatever else and so it's hard,” said Robinson.

Riker, a freshman in high school, and Halle, a sixth-grader, said they’re struggling in their own classes just to help their siblings.

“You just can't focus,” said Riker. “Like sometimes, you're on remote by yourself, and you still can't focus. But you know with the kids around, it's noisy. It's just hard. It's really hard.”

They said being both a teacher and a student is taking a serious mental toll.

“Because they're so little, they don't understand when we need to work,” said Halle.

“I’m used to being kind of like the oldest, and you know, the babysitter, but this is like a whole other level, just like stress and it’s just getting, just difficult,” said Riker.

It’s especially tough because the two youngest children are in special education for speech therapy.

“It’s harder for them to stay caught up without that extra help of the live teachers, so they could they all could potentially fall behind,” said Alexi.

Falling behind is a concern for families across the country. Teachers like Lindsay Datko are fighting to help.

“If they miss those developmental windows, it will take them years to overcome habits that were poorly formed for the average student. So, we will see the effects of this for years to come if we don't act now,” Datko explained.

Datko is tutoring students who are doing remote learning, and she’s been working with local leaders for months to give families a chance to choose whether in person or remote learning works best for their students.

“The whole spectrum is struggling, and we can do something. I know that there are teachers who are truly fearful for different reasons, and we respect that. We are pushing for the choice," she said.

The Robinsons are hoping the new year will bring them the choice to send their children to school.

“I know that they do a lot better in school,” said Alexi. “I hope that we can get through it.”