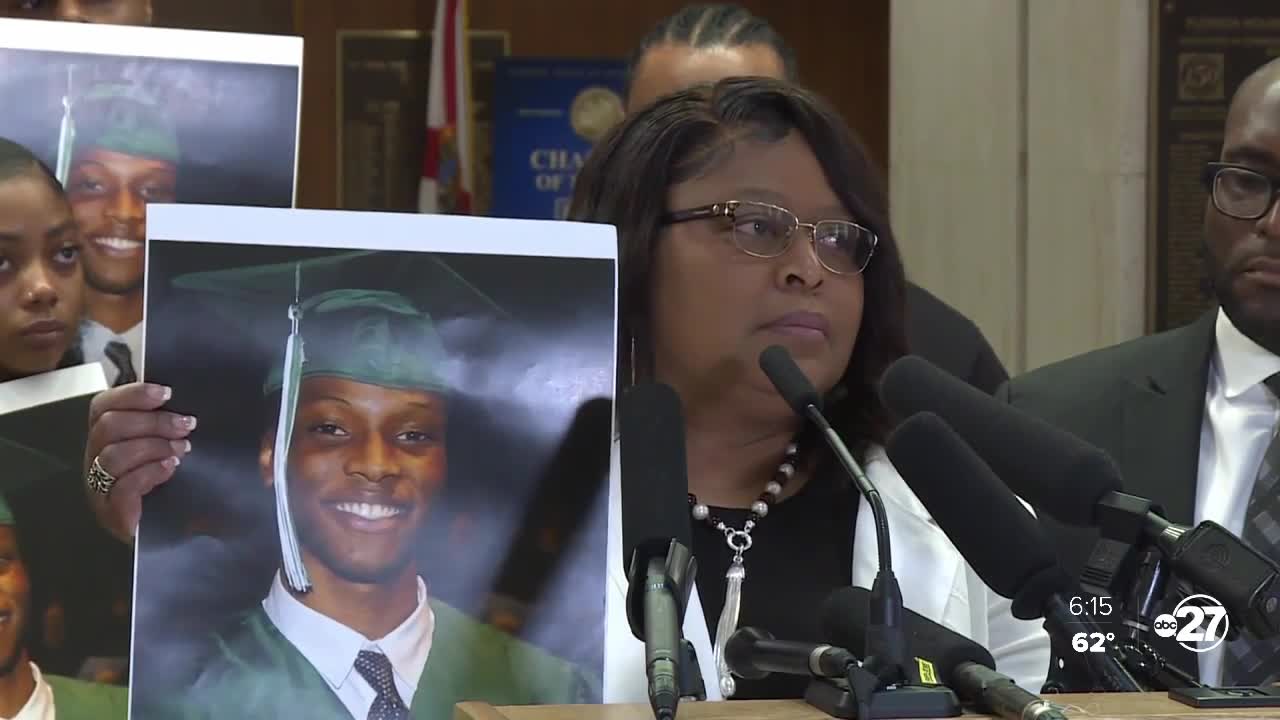 A family says it's haunted by the night their son, a former Florida A&amp;M student, was killed by an officer.

TALLAHASSEE, Fla. (WTXL) — A family says it's haunted by the night their son, a former Florida A&M student, was killed by an officer.

Officers shot Jamee Johnson during a traffic stop in December. They say he was refusing arrest and were afraid he was reaching for a gun in his car.

His family says that doesn't seem right. They're now asking lawmakers to help them get answers.

"There are no words to describe how I'm feeling, losing my youngest at the age of 22," said Jamee's mother.

From Jamee Johnson's heartbroken mother to our state leaders, they all agree something's not right.

"As a member of the Florida House and a state citizen I ask myself what I would do if Jamee was my relative," said Representative Shevrin Jones. "I would probably be doing the same thing his family is doing here today."

The Johnsons and Florida Black Caucus leaders want an independent investigation into the shooting done by the Florida Department of Law Enforcement. Right now, the Jacksonville Sheriff's Office is the only group investigating.

The group says they're at the point where they just can't trust local investigators to do the right thing.

"We're asking law enforcement in Duval County to work with FDLE so that there will be an independent investigation with regard to what happened in Jacksonville," said Rep. Geraldine Thompson, D-Windermere. "The funds and there will be no question to partiality if you bring in an independent body."

JSO says no dash cam video is available and that the body cameras worn during the traffic stop were dislodged during the fight between the officer and Johnson.

But, his family says they still need answers.

"We want to know how it escalated from a seat belt violation to a killing," said Harvey Johnson, Jamee's dad.

Jamee's father what he wants most for his son is closure sooner than later.

"We're hoping we put some kind of speed to find out exactly what's going on. The investigation has been going on for well over six weeks. Jamee's dead now," said Harvey Johnson. "You're not investigating Jamee, so who are you investigating?"

Rep. Alexander also says he wants Governor DeSantis to get involved to make sure their needs are met quickly and efficiently.

"It's clear that there are a lot of questions that have not been answered. We're requesting an independent investigation by the Florida Department of Law Enforcement and we also want access to the tapes," said Rep. Alexander. "Let's be clear: unedited access to those tapes."

ABC 27 also reached out to FDLE about the request. They said they wouldn't have a response without a formal request from lawmakers to investigate on the case.