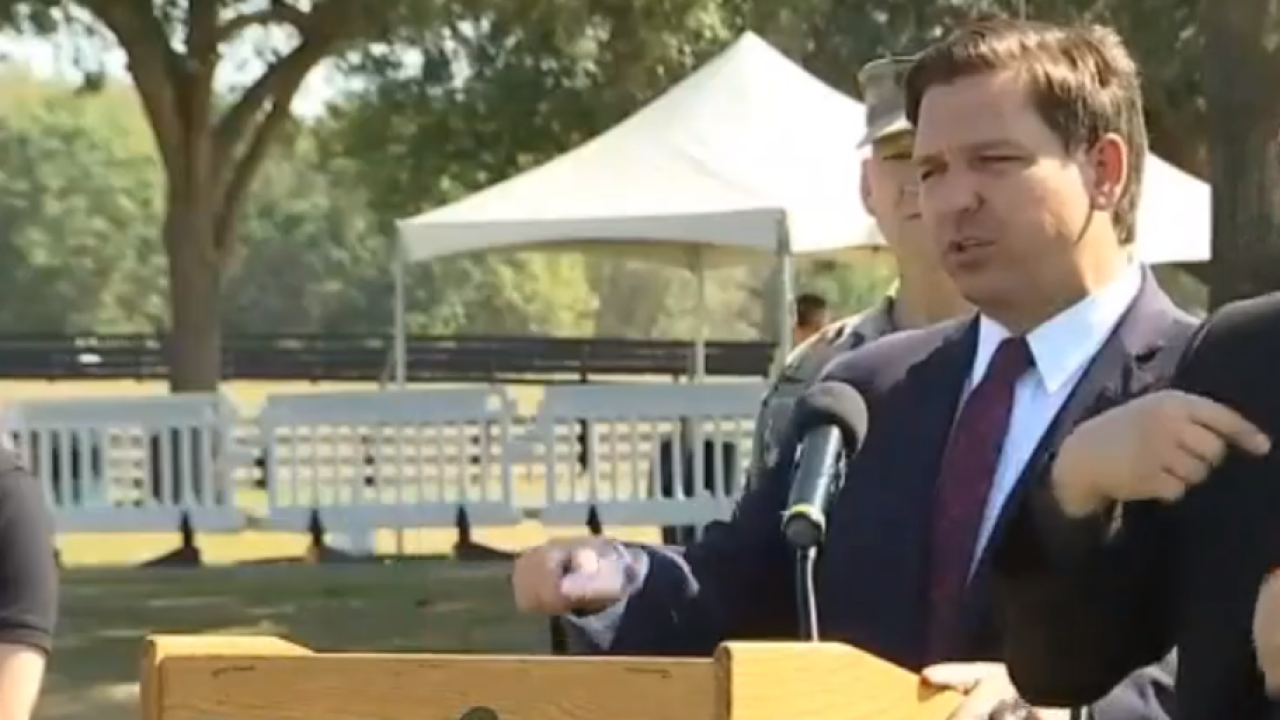 TALLAHASSEE, Fla. (WTXL) — Gov. Ron DeSantis says he's considering several options to stop the spread of the coronavirus across the state, including a stay-at-home order and restrictions for daycares.

At a Monday morning press conference in the Villages, DeSantis said that he was exploring options for a shelter-in-place order, he was hesitant to do so without good data to support it.

"We're looking at different options. What we've done in Florida is, we've done a lot of statewide, what they call 'mitigation measures.' So you know you have bars, all these places closed, heath clubs and that's applying statewide," DeSantis explained. "We've got 20 counties with zero infections and about 26 that have 2, 3, 5, 7 infections. That can obviously change, but in those counties we really want people to get tested so they can be isolated and hopefully prevent outbreaks in those areas."

The governor said that while they've imposed more stringent orders in South Florida, where most non-essential operations are suspended, he doesn't want to hurt the people who are complying with current orders by shutting down the state.

Instead, Gov. DeSantis wants to rely on data collected from current mitigation efforts before making any additional drastic measures.

"For every action, there's a reaction. So we're going to consider what would make sense for Florida," said DeSantis. "I do think we'll end up doing some more stuff very soon. But at the end of the day, you're going to have a group of people who are not going to comply and are going to put themselves first. And the fewer number of those there are, the better off we'll be."

While DeSantis said he believed senior citizens are more likely to comply with the state's orders, he warned about another class of people who elect not to follow directions.

The governor left a warning to those who haven't been helping to stop the spread, telling them to "cool it."

"You shut down the bar, they go to a house party. You know you they have no beach so they go to a sandbar, which is technically not the beach," DeSantis said. "So I would just say for those folks, you need to cool it and let's get through this because the more stuff you're doing, the more difficult and longer that this may go. I think that if we take good action now then we're probably going to be better off even in the immediate short-term.

When asked about daycares, the governor said that he was looking at what other states have done but didn't think there would be an easy solution without some consequences.

"We have essential employees in the state. Even if you told all non-essential to stay home, we have people who are working on very important things for this state," DeSantis explained.

He again stressed that while he wanted to continue to create social separation to slow the spread of the disease, the state has to be mindful of the impacts these decisions could have on people's families.

"We're in a situation where some of these measures won't be sustainable for months and months. It's just not gonna happen," said DeSantis. Now, the state is looking at what other states are doing and whether or not those decisions would make sense in Florida.

DeSantis also said that the state is working with the White House to address people flying in from other states into Florida.

Florida Democrats and the Florida Commissioner of Agriculture have also shown support of a state-at-home measure. Sunday night, Representative Anna Eskamani tweeted her support and said that several other lawmakers are also on board.

Just got off the phone -- several lawmakers including myself asked about #ShelterInPlace. We were told @GovRonDeSantis is "analyzing his options" & if we were to do it there would likely be 48 hours to prepare.

We will keep asking & will keep you posted.#Coronavirus #COVID19 https://t.co/xErEds7tpo

"Shutting down one of the nation’s largest states is a decision that will have an economic impact – but it is a decision that will save lives. Based on the data, we know we are a week behind California's vast increase in COVID-19 cases. The individuals and businesses I've spoken with are growing more anxious by the day. As the nation's third largest state, we need to go further, and we cannot afford to lose another week. I am asking the Governor to consider implementing a statewide "stay-at-home" order, closing all non-essential businesses for a reasonable time frame, after which time the situation could be reassessed."