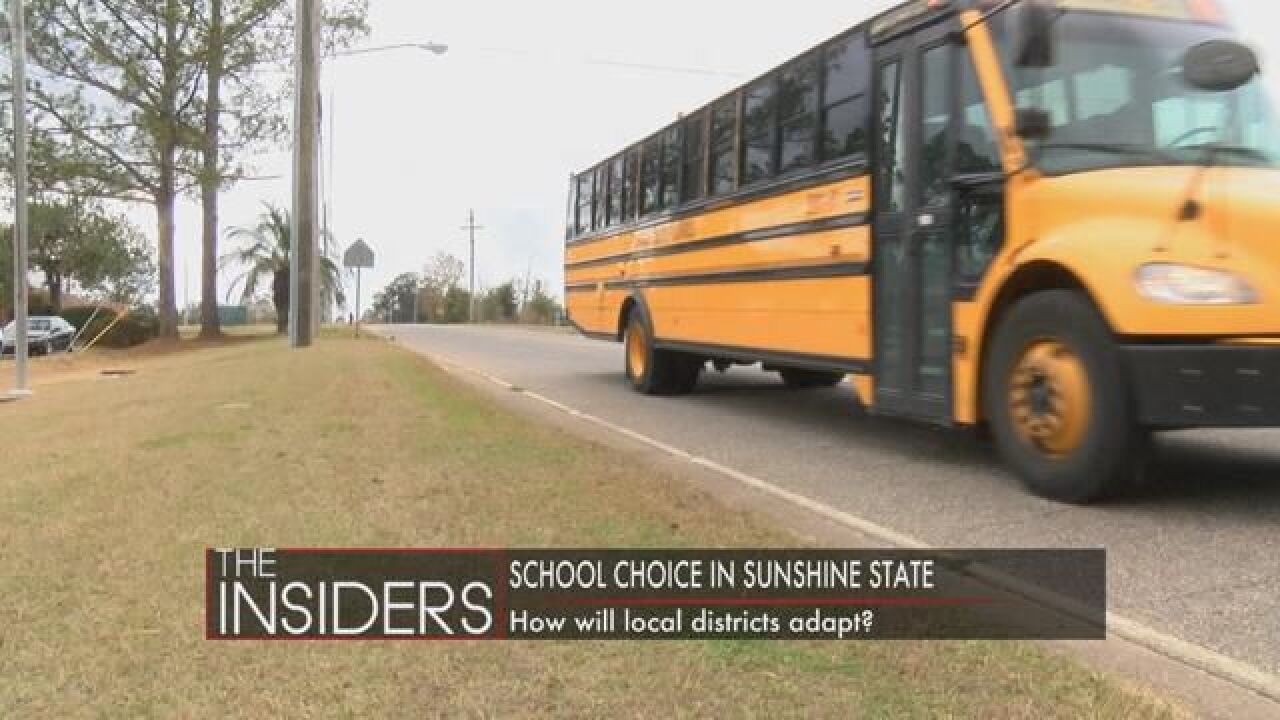 TALLAHASSEE Fla. (WTXL) -- Starting next school year, students in Florida can go to any public school in the state that hasn't reached capacity.

The Florida legislature approved what's called "Controlled Open Enrollment", which gives parents the choice to send their children across city and county lines for their education.

In a special edition of "The Insiders," WTXL ABC 27's Stephen Jiwanmall takes a closer look at Gadsden, Jefferson and Leon counties as each district faces different challenges before classes start this fall.

It's been called "Open borders" or "School choice" and if you haven't heard about it yet, chances are you'll start seeing its effects soon. Students now have the chance to study anywhere in the state, but how will local districts adapt?

The sound of change in Gadsden county happens after months of debate, the school district voted in April 2017 to consolidate.

"Change makes some people uneasy. However, I firmly believe that if we build it, if we grow it, then eventually, the students will come back and will support the efforts of the Gadsden School District", says Roger Milton, the Gadsden County Superintendent.

The decision comes on the heels of major change in the sunshine state. Parents no longer needing fake addresses to send their kids to outside schools. In Gadsden County, some say their actions will hurt the county.

"We talk about losing students. We're going to lose all our students to Sneads. Sneads is going to be our high school. We need to do something about that", says Chris Moultry, the Mayor of Chattahoochee.

Next year, Gadsden County will have only one public high school. It's one of several changes Superintendent Roger Milton is making to reconfigure the district.

"To be able to build champions on the field as well as in the classroom is the direction in which the Gadsden School District will be going with our high school," Roger Milton, the Gadsden County Superintendent.

Milton says he doesn't anticipate a significant group of students leaving the county. His efforts are to make the district competitive enough to bring students in.

As Gadsden County Schools consolidate, Jefferson County will make history as the state's first district run by a charter company. The school board opted to go with an outside organization to save the district.

"We're in uncharted waters. There's no question, and I think we're all feeling our way around right now", said Marianne Arbulu, the Jefferson County Superintendent.

For years, the district has struggled academically and financially, which prompts some parents to pull their children from public schools. Will this decision to go with a charter stop the bleeding?

"We don't see too much in the way of out-migration from the district, and best case we might see some students coming back into the school district, so that's where we're hopeful", says Superintendent Arbulu.

With Gadsden and Jefferson counties making big decisions with their public schools, the expectation is several parents looking to bring their children here in Leon county. Superintendent Rocky Hanna says capacity is the big issue here, that may keep some of these parents looking elsewhere.

Leon County Superintendent Rocky Hanna questions "how many students can we allow in while still accommodating those people that are moving into those school zones?"

Each school determines what capacity means. Hanna says some schools are already at capacity.

"If we have room for existing students from other counties to come into our schools with capacity, then so be it, but our first and primary responsibility is to the residents of Leon County", says Superintendent Hanna.

Parents agree that the district is already stretched thin and new students may not benefit.

Marie-Claire Leman, an education advocate, weighted in on the issue.

"Really spending a lot more than we would've had to, if we'd invested locally into these public schools from the districts where parents are feeling like they have to look elsewhere", says Leman.

"The only people that are able to actually leave those schools are the ones that are able to afford to pay for the transportation for those kids. So, we're looking at a type of economic segregation, if you will", says Catherine Baer, another education advocate.

Transportation to Leon County is nothing new and it might be used more often now. A company called "School district services" buses about 200 students from Wakulla, Gadsden and Jefferson counties.

"It's almost like the land of plenty is just a county next door, and so, everyone is in a rush to get to the county next door," says Ivery luckey, the Executive Director of School District Services

The window to apply for open enrollment in Leon County is closed meaning parents will have to wait until next year to try again. We'll follow up with these districts in the 2017-18 school year to see how they're doing.

If you have a story idea for "The Insiders," you can email us at ABC27NEWS at wtxl.tv, attention "The Insiders."