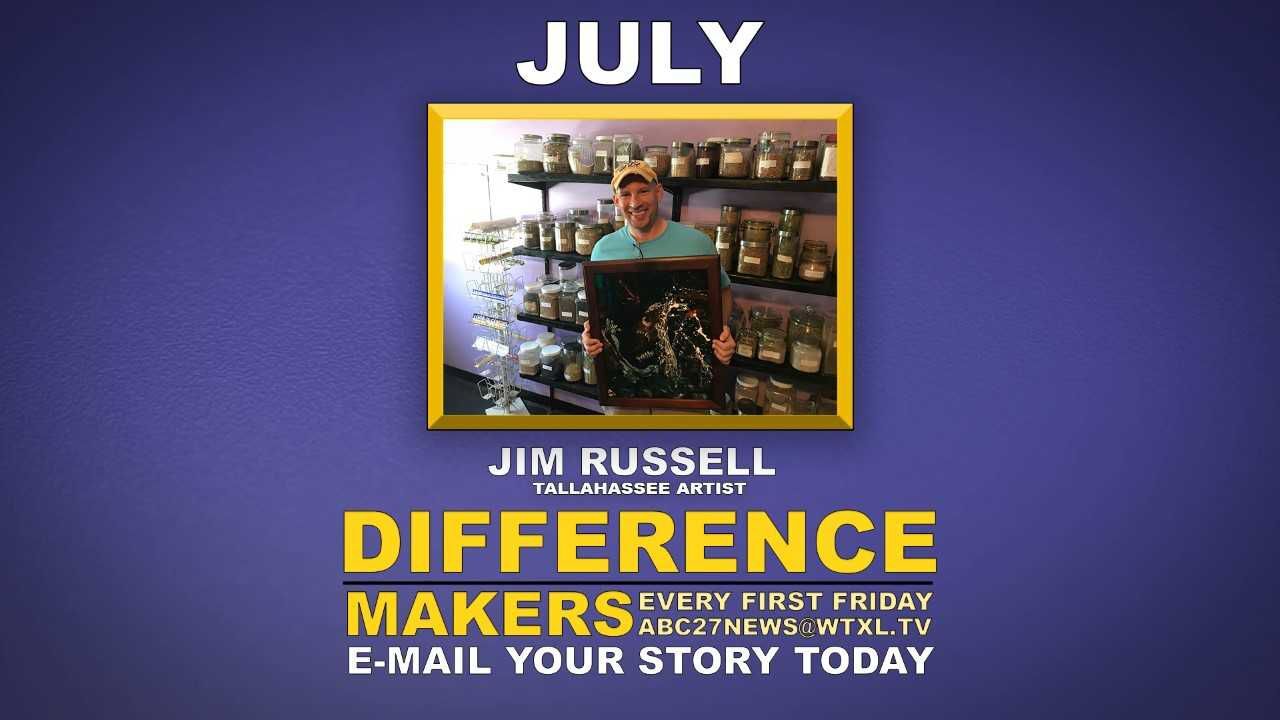 TALLAHASSEE, FL - Art is a visual form of expression that often connects people who may be going through similar struggles.

July's Difference Maker is a Tallahassee artist who is drawing attention to social issues, such as mental illness, suicide and abuse.

"Suicide and mental health is very misunderstood. When you talk about a mental health PEOPLE immediately think about violence and unpredictability and that sort of thing, but the fact is that somebody who suffers from mental health conditions are more likely to be victimized," said Jim Russell, a Tallahassee Artist and July’s Difference Maker.

Creating art is a place of refuge for Jim Russell who has witnessed more than most people.

25 years on the force, the now retired Florida State Deputy Chief has seen the really ugly things in law enforcement, including sexual assault and child abuse.

"One of the very first cases I worked with was child abuse of a 4-year-old, being able to express myself and talk about those things through art and help others understand the impact of those things have made my reach a little further instead of just going to work and being a cop," Russell said.

It's his personal experience of dealing with mental health that really comes through in his art.

"I'm diagnosed with major depression disorder, panic disorder and generalize anxiety disorder. My artwork has been an expression of some of those feelings, but I've always wanted to use the artwork to reach out and connect with other people that maybe can't, or unable to, or are too fearful to express themselves," said Russell.

Russell points out one of his early paintings before ever knowing he, a cop was struggling with mental illness.

"This is an oil painting depicting somebody who is experiencing depression," he said.

Over the years his art dives into other social issues, including child abuse, sexual assault and suicide

“Being a grieving parent is a club no one wants to belong to," said Russell.

It’s a club, Bill Tice became a part of almost 6 years ago, when his son Billy, at age 26 committed suicide.

"I do suffer from PTSD. I was the one to find my son, he shot himself in the head with my shotgun," said Tice.

The only way he can deal with the loss of his son, he says is by giving all of his energy to suicide prevention and helping other parents who lose a child to suicide.

"Billy was my only child and basically when I loss him, I lost a big part of my identity and purpose in life," Tice said.

He commissioned Jim Russell to capture his grief in a painting.

"Gratitude to Jim sadness as to why I'm getting it. He has a talent for conveying the message of the feeling of mental illness of being suicidal and giving the message of that there is hope, you can get through it and that's the important part for me. He gives me hope," he said.

Jim Russell says it's that little bit of hope, that draws him to the easel.

"It's not going to make it better, but sometimes when you’re dealing with something that is so hard, just knowing you have somebody shoulder-to-shoulder with you can help you stand up a little bit longer," said Jim Russell.

His art is eliminating the stigma surrounding mental illness and that's why Jim Russell is July's Difference Maker.

You can find Jim Russell's art on Facebook: https://www.facebook.com/JimRussellArtist/

Nominate our next Difference Maker by sending an email to csouders@wtxl.tv.