(RNN) – A would-be NASA intern lost her job before she even started, after a slightly raunchy celebratory tweet ran her into a former NASA engineer and member of the National Space Council advisory group – whom she promptly insulted.

But there is, possibly, a silver lining.

It began on Monday, when a user who identified herself as Naomi H alerted the world she had been accepted for a NASA internship.

“EVERYONE SHUT THE F--- UP … I GOT ACCEPTED FOR A NASA INTERNSHIP,” she wrote.

Hardly the worst thing ever written on Twitter. In this case, though, where Naomi H messed up is that Homer Hickam is not some random Twitter user, but a respected author of the book that inspired the film “October Sky” who serves on an advisory board that reports to the vice president.

“And I am on the National Space Council that oversees NASA,” Hickam informed Naomi H.

The tweets have since been deleted, and a subsequent blog post by Hickam has also been deleted. 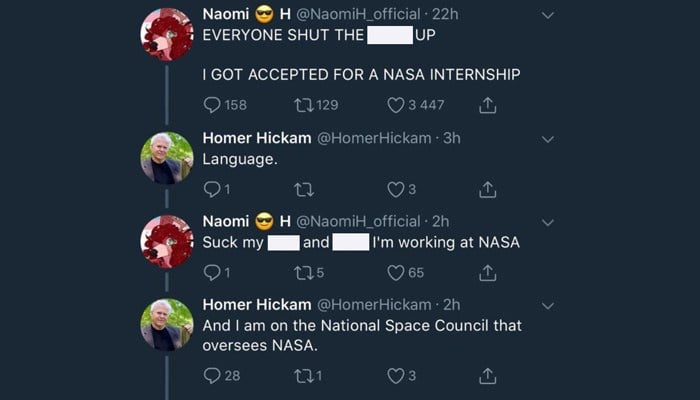 According to accounts of that post, however, he explained that as a Vietnam War veteran he wasn’t especially bothered by the F-word, but concerned “that this young person might get in trouble if NASA saw it.”

“So I tweeted to her one word: ‘Language’ and intended to leave it at that,” he wrote. “Soon, her friends took umbrage and said a lot of unkind things.”

He said he later deleted his tweets and blocked the friends, but learned Naomi H had lost her internship offer.

“This I had nothing to do with nor could I since I do not hire and fire at the agency or have any say on employment whatsoever,” he wrote.

He said that, through the NASA hashtag, a number of the comments came to the agency’s attention.

But Hickam said he is now trying to help the young woman, after “she reached out to me with an unnecessary apology which I heartily accepted and returned with my own.”

“After talking to her, I am certain she deserves a position in the aerospace industry,” he wrote. “And I’m doing all I can to secure her one that will be better than she lost.”

Naomi H, too, appears to have learned a lesson. Her account is now private and her bio says she is “taking a break from Twitter for a while.”