(RNN) – Disease diagnoses stemming from mosquito, tick and flea bites have tripled in the last 12 years, according to a study by the Centers for Disease Control and Prevention.

In 2004, the agency recorded more than 27,000 vector-borne disease cases. Vectors are disease transmitters, usually insects via their bites.

“Almost everyone has been bitten by a mosquito, tick, or flea,” the CDC report states. “These can be vectors for spreading pathogens (germs).”

The study's lead author, Dr. Lyle Peterson, told The New York Times: “The numbers on some of these diseases have gone to astronomical levels."

The agency also took note of nine new germs spread by mosquitoes and ticks during the study’s timeframe, including the Zika virus, which was an official epidemic in 2015-16.

It also found a wide swath, 84 percent, of local health authorities around the country lacked “critical prevention and control capacities” for such diseases.

One of the risk factors, the report states, is commerce and travel moving insects and infected people around the world.

It recommends state and local agencies “build and sustain public health programs that test and track germs and the mosquitoes and ticks that spread them” among other solutions to the spread of diseases.

“The US needs better tools and more staff with greater expertise at local and state levels to reduce the growing threat of these diseases in the US,” the report states.

It also provides simple recommendations for individuals, such as using insect repellent, wearing long sleeves and pants, and treating clothing and gear with permethrin (insecticides such as Nix). 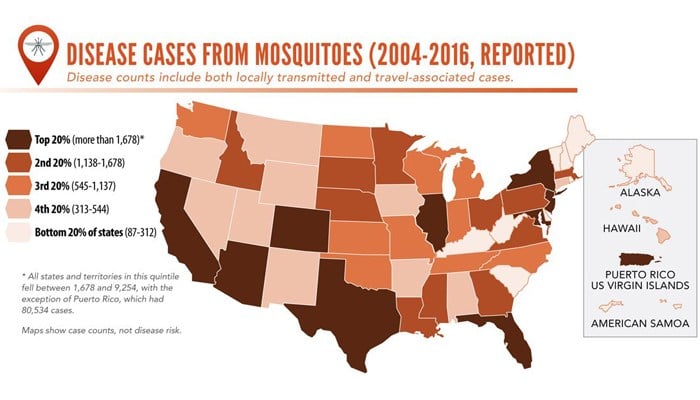