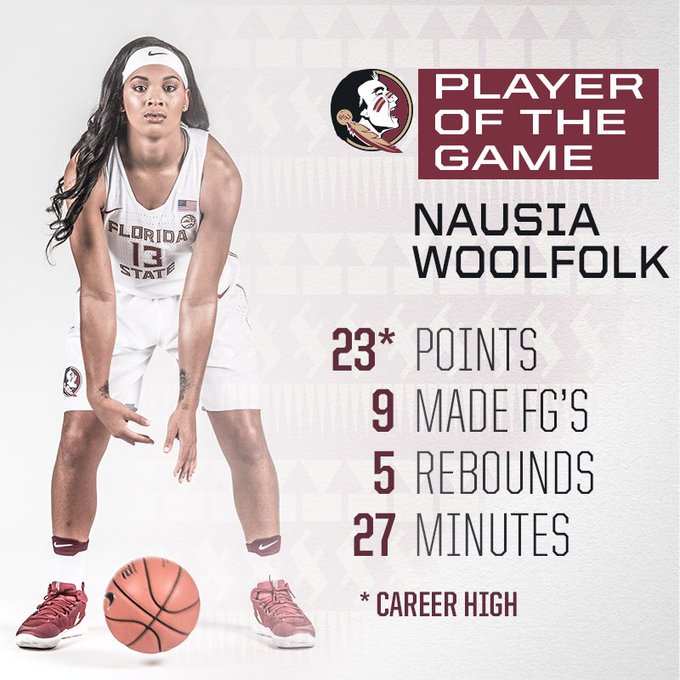 She came.
She saw.
She conquered. #FSUWBB

Imani Wright had 17 points, Chatrice White 14, Shakayla Thomas 12 and AJ Alix 10 for the Seminoles (15-2, 3-1 Atlantic Coast Conference), who tied the school record with 12 3-pointers in bouncing back from a Sunday loss at Syracuse.

A 9-0 run gave Florida State a 21-7 lead with four minutes left in the first quarter and the lead stayed in double figures the rest of the way. Miami’s largest deficit of the season was 15 points but the Seminoles surpassed that in the first quarter. They scored the last 11 points of the first half to lead 57-31.

• The Seminoles had six players record double-figure points for the 16th time in school history, including the third time this season. FSU has never had a game with seven double-figure scorers.

• The Seminoles’ 39 made field goals on Thursday night tied a season high (also had 39 vs. UNF).

• FSU continues to dominate the state of Florida, going 32-4 over its last 36 games against in-state opponents.

• Imani Wright nailed four more 3-point field goals, bringing her season total to 55. She is already in the Top 10 for a season with her 55 made 3-pointers, placing 10th on the list.

• The Seminoles shot 50 percent or better in each of their four quarters played.

“This was a great game, I thought we competed hard and after the disappointing loss up at Syracuse we really challenged our team and I thought they really rose to the occasion and held each other to a higher standard. You could see it in Chatrice in practice. I knew she was a different player the last few days in practice. Nausia is so special and when she’ll believe that, she’s gonna be one of the all-time greats. Everybody’s told her that and tonight I think she started to believe it a little bit.”

On what was most impressive tonight, offense or defense:

“You know I’m gonna say defense. That’s where it all starts. It just so happened that we were shooting the ball well in addition to [the defense]. But if we don’t shoot the ball well, we have to be able to defend. So I was really pleased with the vision that we had, and I told them that we have to be in the right position and then if we’re not then we have to cover. But tonight we were in the right position and it made it a lot easier on all of us.”

On the production from the bench:

“People question our depth a lot and I think this team started to question their own depth. Whether how hard they could go for as long as they needed to. I think they answered a lot of questions tonight. When we play at the kind of tempo that we need to play, anybody on this team can score, and that’s a fun thing to have as a coach.”

On the special dynamic of Nausia and Nicki coming off the bench:

On wanting to see the same energy from tonight moving forward:

“I know I’m going to [see the energy] if I’ve seen it at practice. It’s hard, it’s a grind, and for them to come back tomorrow after playing this game, I know we’ve got to be so focused on the next opponent. It’s not easy and they’ve got a lot of other things going on, but I think this group is mature enough to continue to have good practices and that will help us to be a better team.”

On the difference of the team in practice:

“Yeah, for sure. We were challenged in practice to compete against each other and when the stakes were higher we rose to that. Especially yesterday in practice, it was just a lot of fun. We were going after each other just like you saw in tonight’s game, it really carried over. Each practice we got better and built off that and then it carried into today’s game.”

“I love the energy that Nausia brings today and in all of our games. I was just telling her that at the end of the game, she was diving on the floor and smiling and that gave me energy because I knew she was out there giving to her team. In the past we’ve struggled with that with Nausia, but today and these last few days at practice she’s really stepped up and it’s really fun to play with her.”

On playing her best games against Miami:

“I think it’s a good matchup for me and for our team and the in-state rivalry adds some excitement to it as well. But their inside presence is really fun for me to go against. I just find it so fun playing against them, it just gives me energy and I love hearing the crowd screaming when I make big plays and when my teammates knock down threes. It’s huge for us so it’s fun.”

On wanting to get to the 100-point mark:

“I mean we always want to get as many points as we can, but when Nicki knocked down that free throw I knew it was going in.”

On finding a different gear after previously struggling with injury:

“Yeah I do. My injury was a motivation for me. This year was all about getting better and showing my teammates, even though I said it last year, that I could be a good player and fit in with the group. It was kind of a struggle, but this year I feel like I have improved a lot and I feel confident in myself.”