Pak won handily, shooting 13-under overall and winning by seven strokes in a dominant tournament performance. The returning All-American shot an even-par 72 in his final round, but was well ahead after carding a tournament record 62 in his opening round, followed by a 69 in his second round. 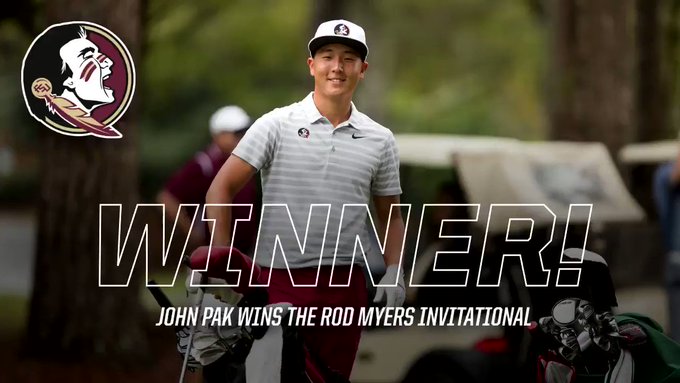 Congrats to @johnnydpak. He gets his second career tournament win, finishing at -13! #FSUGolf

Pak’s win is the second of his FSU career, as he also won the Seminole Intercollegiate last year as a freshman.

The Seminoles were one of four teams who finished under par for the tournament, shooting a 4-under 860 (287-288-285). Penn State won the Rod Myers Invitational at 12-under, followed by Duke and North Carolina (-10 each) and FSU.

Pak totaled four birdies along with four bogeys in his Sunday round. He led all golfers with 18 birdies and also led the field on par 4 scoring at 6-under.

Senior Corey Carlson tied for 17th at even par, carding a 1-under 71 on Sunday. He had an eventful final round that included six birdies, a bogey and two double bogeys. Carlson’s two double bogeys came in his first two holes played, but he stayed resilient the rest of the way and ended with a good score.

Juniors Jamie Li and Jake Carter each tied for 41st at 8-over, while Greyson Porter also went 8-over. Carter finished strong in the tournament, shooting FSU’s low round of the day with a 2-under 70.

Freshman Alberto Martinez, playing as an individual, finished 10-over but shot an even-par 72 on Sunday.

FSU returns to the OFCC/Fighting Illini Invitational held at Olympia Field on Sept. 14-16.