The Florida State Women’s Basketball team won their seventh consecutive ACC/Big Ten Challenge matchup in an 87-58 victory over Penn State on Thursday at the Donald L. Tucker Civic Center. The leader of that charge was a former Big Ten player herself, redshirt junior forward Kiah Gillespie.

The Maryland transfer led the Seminoles on the night with a career-high 27 points. Gillespie got out to a hot start, scoring 10 of Florida State’s first 17 points seven minutes into the game. Her 20 points in the first half tied junior guard Nicki Ekhomu with the most in a half this season. Gillespie added five rebounds, an assist and a steal to her contributions on the night.

“It was definitely my teammates getting to their spots,” Gillespie had to say of her performance. “I credit a lot of that to them. If they don’t space out the floor then I’m not able to get in those gaps and those seams that we work so hard for in practice, so I think a lot of that was to them being where they were supposed to be.” 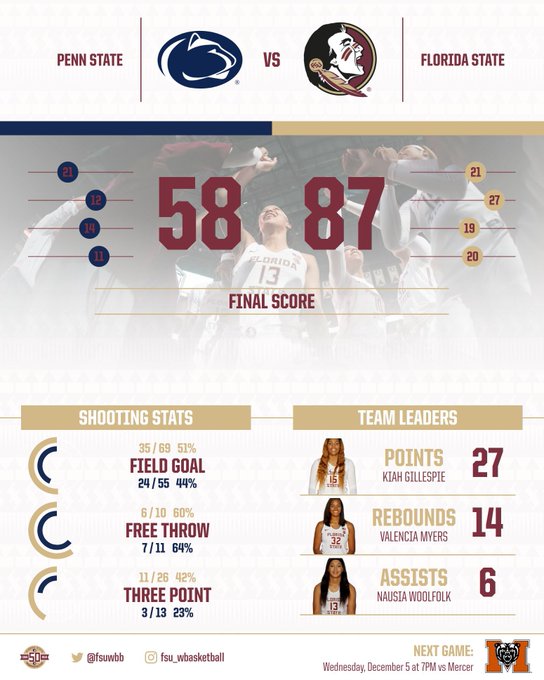 Her teammate Valencia Myers had a career night of her own, besting her previous career-high of 12 rebounds from last week with 14 on Thursday. The freshman forward added 11 points to her total to register her third double-double of the season.

Junior guards Nausia Woolfolk and Ekhomu each scored in double figures. Woolfolk posted 16 following her Junkanoo Jam MVP performance against No. 12/14 Iowa on Saturday, while Ekhomu added 11. The two shared the team lead for assists with six.

Sayawni Lassiter scored her first points at the Tucker Center on Thursday with a career-high of nine, all from beyond the arc. She followed Woolfolk and Ekhomu with a career-best three assists. 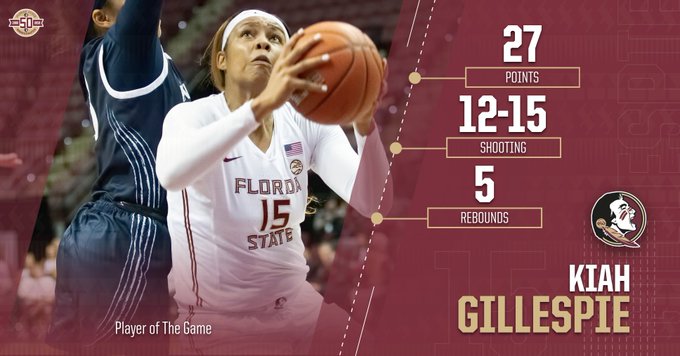 “The chemistry has been great, it’s been a lot of fun,” Florida State Head Coach Sue Semrau said. “It’s developing on the court with the communication and that’s because they are so willing off the court to take care of one another, learn each other, and build relationships.”

The Seminoles and Lady Lions played to an even 21-21 to end the first quarter. From there, FSU went on to outscore Penn State 66-37 in the remainder of the game. Florida State registered its best shooting performance of the season, shooting 50.7% (35-of-69) on the evening and 42.3% (11-of-26) from three-point range.

Pittsburgh’s win over Northwestern on Thursday night clinched another ACC win over the Big Ten in the challenge. The ACC won this year’s contest to improve their record to 9-0-3 all time. Florida State’s streak of seven consecutive victories in the challenge is the most of any team in either conference.

“We’re really proud of that and we’re proud of the fact that since the challenge began, the ACC has never lost and that’s true again tonight,” Semrau said. “I’m excited about that for the ACC and we’re happy we could do our part.”

The Seminoles next game will serve as their first road contest of the year as they travel to face Mercer on Wednesday, Dec. 5 at 7 p.m. at Hawkins Arena.