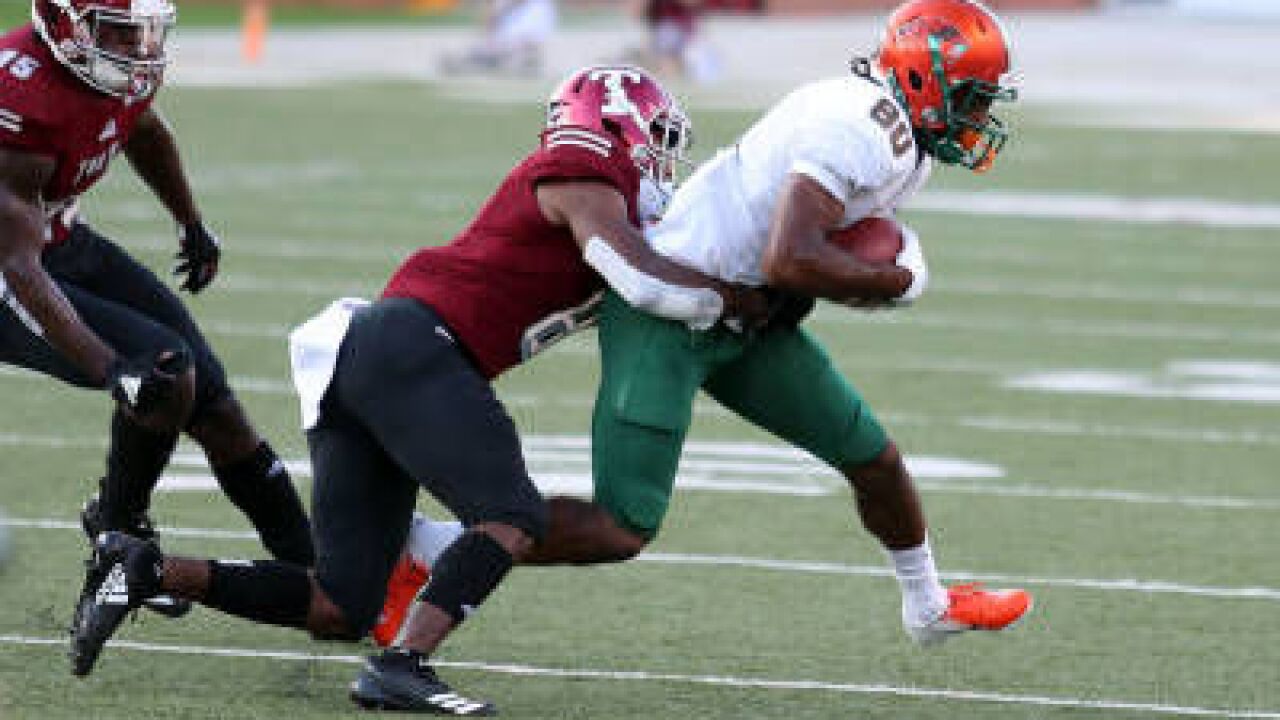 Saturday’s setback dashed any hopes the Rattlers had of winning the 2018 Mid-Eastern Athletic Conference title, and an automatic bid to the Air Force Reserve Celebration Bowl in the Mercedes Benz Dome in Atlanta.

FAMU finished the season 6-5 overall, and 5-2 in the MEAC, their first winning records in both categories since 2011, and after seven straight losing seasons, first-year coach Willie Simmons and his staff breathed new life into the storied program, and had the Rattlers poised to win the school’s first MEAC crown since 2010.

But the Beach Boys from Daytona (7-5, 5-2 MEAC) took the game away from the Rattlers in the second half, after trailing 13-7 at halftime.

FAMU held the early advantage, thanks to Yahia Aly field goals of 20 and 24 yards, and a 19-yard scoring strike from QB Ryan Stanley to Marcus Williams, the TD coming with 32 seconds left in the half.

The ‘Cats actually took a 7-3 lead midway through the second quarter on a one-yard run by QB David Israel (8:40), before Aly’s 24-yard fielder, and the Stanley to Williams connection  put the Rattlers ahead at the break.

Bethune-Cookman began taking control of the game in the second half, plunging a dagger into the Rattlers’ hopes early when halfback Tupac Isme took a handoff deep in his end zone, broke through the line and dashed 99 yards for a touchdown, putting his team ahead, 14-13 with 12:43 left.

The ‘Cats extended their lead to 17-13 on a 44-yard fielder by Uriel Hernandez with 6:13 left, but the Rattlers stormed back to take the lead at 19-17, capping a 72-yard march with Stanley’s nine-yard pass from a to freshman George Webb.

But disaster struck as Yahia Aly’s point after try was blocked, and returned by Vernon Walker III for a two-point defensive score, tying the game at 19-19 with 37 seconds left in the third.

FAMU finally made one final drive downfield, reaching the ‘Cats red zone, when a pressured Stanley made an off-balance throw that was picked off by Tydarius Peters, who raced 90 yards for the clincher with 17 seconds left.

For the Wildcats, Saturday’s win was their eighth in a row over FAMU, closing the gap in the Classic series record (21-17 FAMU leads), and the overall record (48-22-1, FAMU leads).

Meanwhile, FAMU and Bethune-Cookman (5-2 MEAC) will share second place, and pending the outcome of next Saturday’s makeup game between South Carolina State (4-2 MEAC) and slumping North Carolina Central, there could be a three-way tie for second.

INSIDE THE NUMBERS: FAMU outgained the Wildcats, 465 to 417 in total offense, but three interceptions, and explosive plays by the Wildcat offense stymied the Rattlers on Saturday….

FAMU’s Chris Faddoul, the nation’s leading punter, may have sealed the 2018 FCS Punting title after Saturday’s performance, when he averaged 53.5 yards per kick on four tries, including kicks of 67 and 65 yards…..

QB Ryan Stanley passed for 305 yards and a pair of scores on 27 of 45 passing, with three interceptions… The redshirt junior became the fifth FAMU quarterback to breach the 6,000-yard barrier, finishing the season with 6,071 yards…

Freshman speedster Xavier Smith had 178 all-purpose yards Saturday, getting 127 yards on eight catches, while picking up another 51 yards on two kickoff returns… Azende Rey was the second leading receiver with seven grabs for 40 yards, while Marcus Williams finished with six receptions for 84 yards and a score…

Ricky Henrilus led the FAMU ground game with 80 yards on 18 carries, followed by Deshawn Smith with 60 yards on six carries, before exiting with an injury.

Defensive backs Terry Jefferson (8), and Eric Smith (7), along with linebacker Elijah Richardson (7) were the tackle leaders for FAMU.

Bethune-Cookman’s Tupac Isme led all rushers with 107 yards on five carries, highlighted by the 99-yard run in the third period… QB David Israel, who split time with Jabari Dunham, passed for 216 yards on 12 of 23 passing, while rushing for 24 yards and a score…

Keavon Mitchell led the ‘Cats receivers with 63 yards on four receptions…. Tydarius Peters finished the game with 11 tackles, a tackle for loss, and two interceptions, the last one the game clincher.