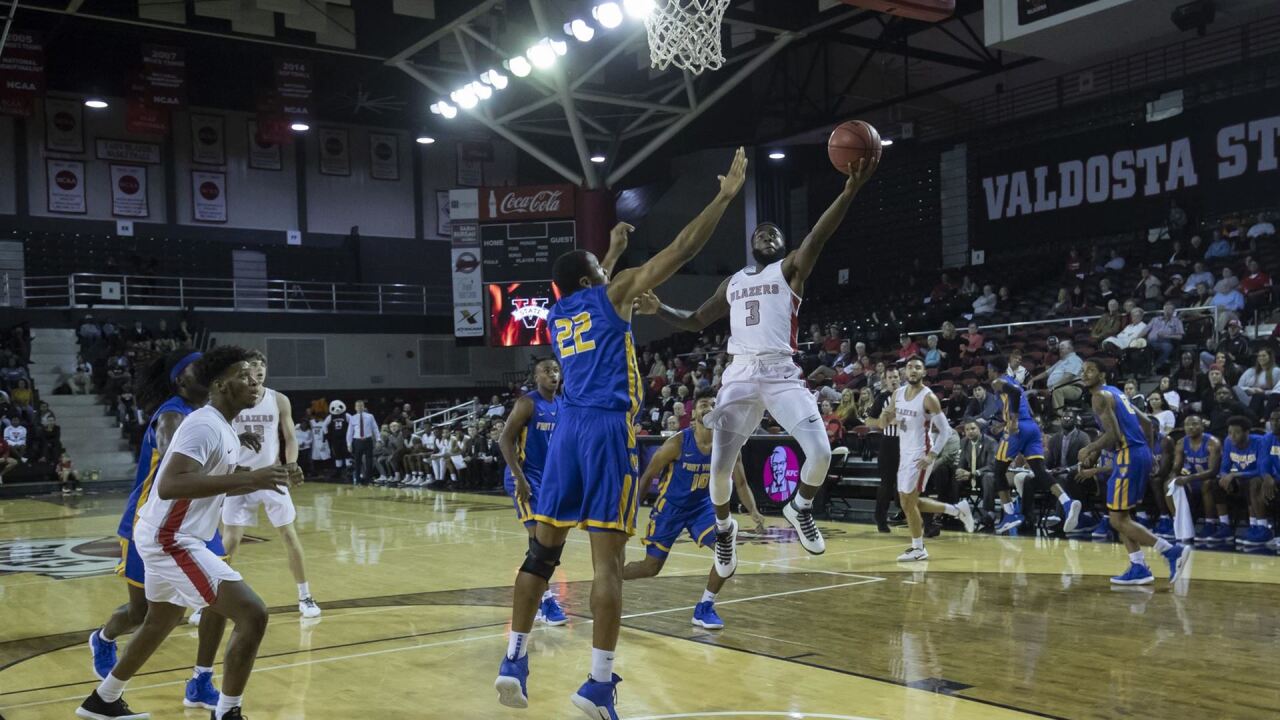 JACKSON, Tenn. – Down by as many as 15 points in the second half, the No. 9-ranked Valdosta State men's basketball team battled back and regained the lead with three minutes left, before falling at Union 84-79 Monday evening.

Union broke a 44-44 tie with a 15-0 run, but saw the Blazers, behind the strong play of sophomore Cam Hamilton chip into the deficit and regain the lead with 3:13 left. VSU, however, was unable to hold the lead as the 3's were falling for the Bulldogs all night.

Hamilton ended the field goal drought with a layup with 10:39 left in the half as the Blazers began slowly chipping away at the deficit. VSU used a 7-0 run to pull within 21-20 on a pair of senior Tyler Edwards charity tosses with 8:10 left and then a dunk from Jones, followed by a layup from senior Bryce Smith regained the lead for the Blazers at 24-23 with 6:49 left.

Jones had nine points and seven rebounds to lead the Blazer on 3 of 6 from the field with a triple and two free throws, while Terrandus Smith had a team-high eight points for the Bulldogs in the opening half.

Union opened the second half with a 9-4 run and pulled within 42-41 on a layup from Tylandrius Parks with 16:58 left and a timeout by the Blazers. Cooper Meadows tied the game at 44 with a triple with 15:56 left, extending the second half run to 12-6 for the Bulldogs.

Back-to-back triples from Smith gave Union a 50-44 lead with 14:09 left as the shooting woes continued for the Blazers, making just 3 of their first 15 shots, while Union was 7 of 11 with four coming beyond the arc to begin the half as Union was in the midst of the 15-0 run.

Out of the timeout, Hamilton once again had the answer for the Blazers with a bucket and followed with a triple on a kickout from junior Burke Putnam for a 59-50 deficit with 10:59 to play and a timeout by Union.

The treys kept falling for the Bulldogs as VSU had cut the deficit to seven, but a pair of triples from Boykin pushed the lead back over double-digits with 9:17 remaining. Hamilton answered with a steal and a layup and a triple quickly pulling VSU within 65-59. Hamilton then hit another trey pulling VSU within 67-62 with 6:32 remaining. Union had the answer, once again, with another trey on a hoop-and-harm for Boykin and a 71-63 lead.

Jones secured his third double-double and Guillozet scored on the other end pulling VSU with 73-70 with 4:49 left. Edwards scored on a layup for a 73-72 deficit as Union began to go cold down the stretch. Smith then used an emphatic dunk for a 74-73 VSU lead with 3:11 left.

The lead was short lived, however, as Boykin buried another triple moments later for a 76-74 Union lead. An offensive foul on the Blazers gave the ball back to Union with 2:35 remaining. Boykin again punished the Blazers with another triple for 28 points to that point and a 79-74 lead. Hamilton then answered with a triple at the other end as the game became a long-range contest.

Meadows hit another triple and Guillozet scored inside for an 82-79 deficit with 1:08 left. With 36 seconds left, trailing by three, VSU grabbed the defensive rebound and missed the shot with 12 seconds left. Boykin sealed the win at the line with two free throws, for the 84-79 victory.

The Blazers will look to rebound at the Terrace Hotel Thanksgiving Classic hosted by Florida Southern this weekend. VSU will face Saint Leo Friday at 5:30 p.m., and host Florida Southern Saturday at 7:30 p.m.