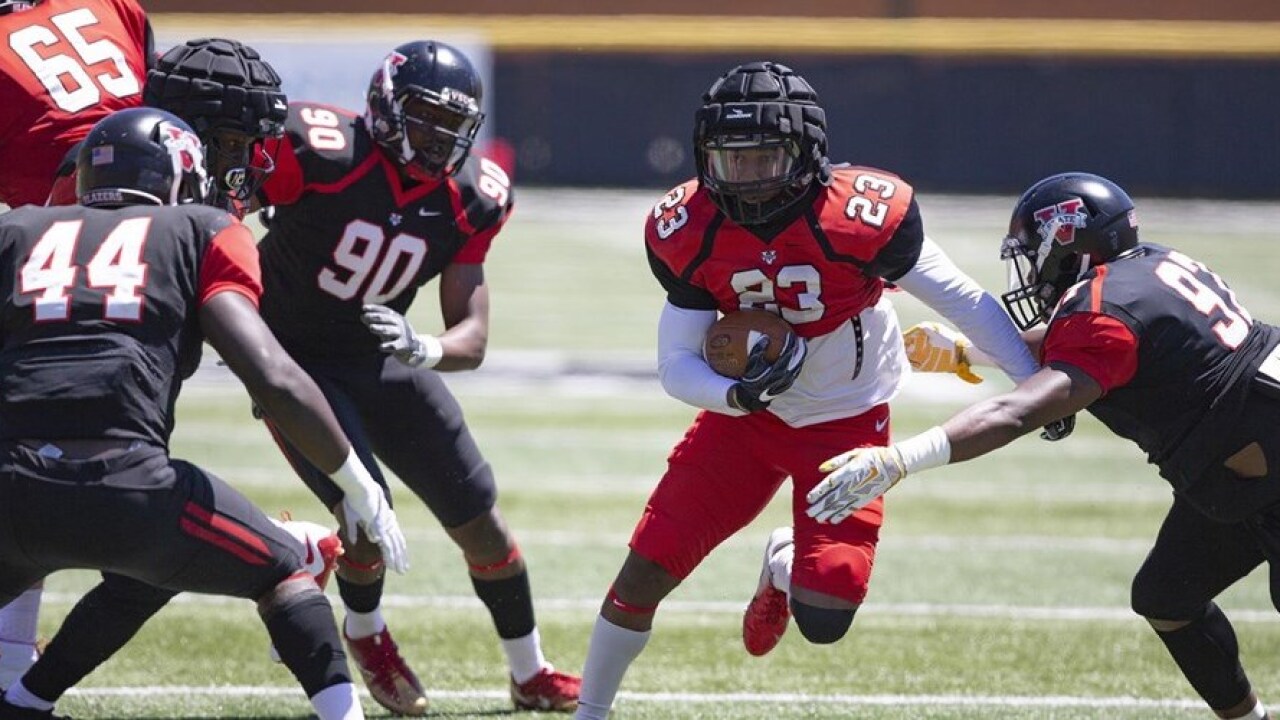 With a final score of 27-23, the offense beat out the defense, in a high-energy game where both sides of the ball had strong performances.

"We had 12 workouts & then three scrimmages. You're not going to master an offense or defense in just 12 practices," said Goff. "But overall, I'm extremely pleased."

The first quarter was played under normal rules with the ball starting at the 35-yard line and a running clock. The scoring format was traditional for the offense, but for the defense one point was awarded if it stopped the offense from crossing midfield and for missed field goals. If the offense crossed midfield and failed to convert on fourth down, the defense received two points. Interceptions and fumbles were worth three points, or six points if returned for a touchdown.

Early in the game, freshman quarterback Ivory Durham showed off his acceleration and speed while scoring the first touchdown of the day by making several defenders miss on a 16-yard scramble into the endzone.

VSU's defense began to gain life after stopping the offense from crossing midfield to get their first point of the game. The defense then caught a break when junior receiver Lio'undre Gallimore took off for what would've been a 75-yard catch and run touchdown, until he dropped the ball at the one-yard line in a premature celebration that the crowd found amusing when it was replayed on big screen.

The defense recovered Gallimore's fumble for three points and by the end of the first quarter, the offense was up 10-4.

The second quarter was designed for situational football with drives starting at the minus 40 yard-line, and VSU's defense continued to put on a strong showing.

The defense forced two interceptions in the second quarter and took an 11-10 lead at one point. The offense retaliated on the final drive of the half after a blown coverage set up an easy throw from Durham to redshirt freshman receiver Isaiah Wilson for a touchdown.

"I think there's a lot of playmaking on the defense, we have the ability at all three levels," said defensive coordinator Lee Stalker. "I'd love to continue to see the growth of knowledge, and the communication on the field at times lacks but there's a lot of playmaking ability. We went out there today and showed that. The defensive line can go attack & beat one on ones, and the defensive backs and linebackers can go out there and make plays, so it was great to see that."

At halftime the score was 17-11 with the offense leading.

The third quarter was situational football around the red zone and the defense continued to show their playmaking ability. The secondary intercepted both Durham and 2018 Harlon Hill Award runner-up sophomore Rogan Wells and the defense halted a couple of drives to score a total of eight points in the quarter. The offense eventually scored a touchdown when freshman quarterback Wanya Williams threw a perfect pass over the shoulder to redshirt freshman Reshad Washington in the endzone.

The fourth was played just like the first quarter as freshman Seth McGill wowed the crowd with a one-handed grab towards the sideline and then stopped on a dime to shake a defender to gain extra yards. However, that wasn't enough to lead to points on the board as the offense was left scoreless for the entire fourth quarter.

The Black Swarm defense stopped three straight drives to conclude the Spring game, and despite losing 27-23, they received high praise from their coaches.

"We're just getting that transition & those guys did an outstanding job. Were there challenges….Absolutely, but they did a good job," said defensive line coach Kenny McClendon. "All we look for is improvement from practice one to the spring game and that's what we saw."

As for coach Goff's first year as VSU head coach, his return to Bazemore-Hyder Stadium as a coach is still settling in.

"This is a little bit surreal still. I'm on the field where I used to come out and play and sweat. "It seems like it was decades and decades ago, but still so much has changed but so much is still the same. Blazer football is dear to a lot of people in this community and really throughout the southeast, so it's a lot of fun to be back and take this all in. However, that also drives me to work that much harder because I want to make sure we succeed here, I don't want anything to get in the way."

The Alumni Game concludes the 2019 spring season for the Blazers. VSU will return to the field in early August for camp, prior to beginning its national championship title defense in 2019. VSU has five home games on the 2019 slate. Following a road game to open the season at Albany State on Sept. 7, the Blazers return home to host Ohio Dominican at 6 p.m. on Sept. 14 at Bazemore-Hyder Stadium.