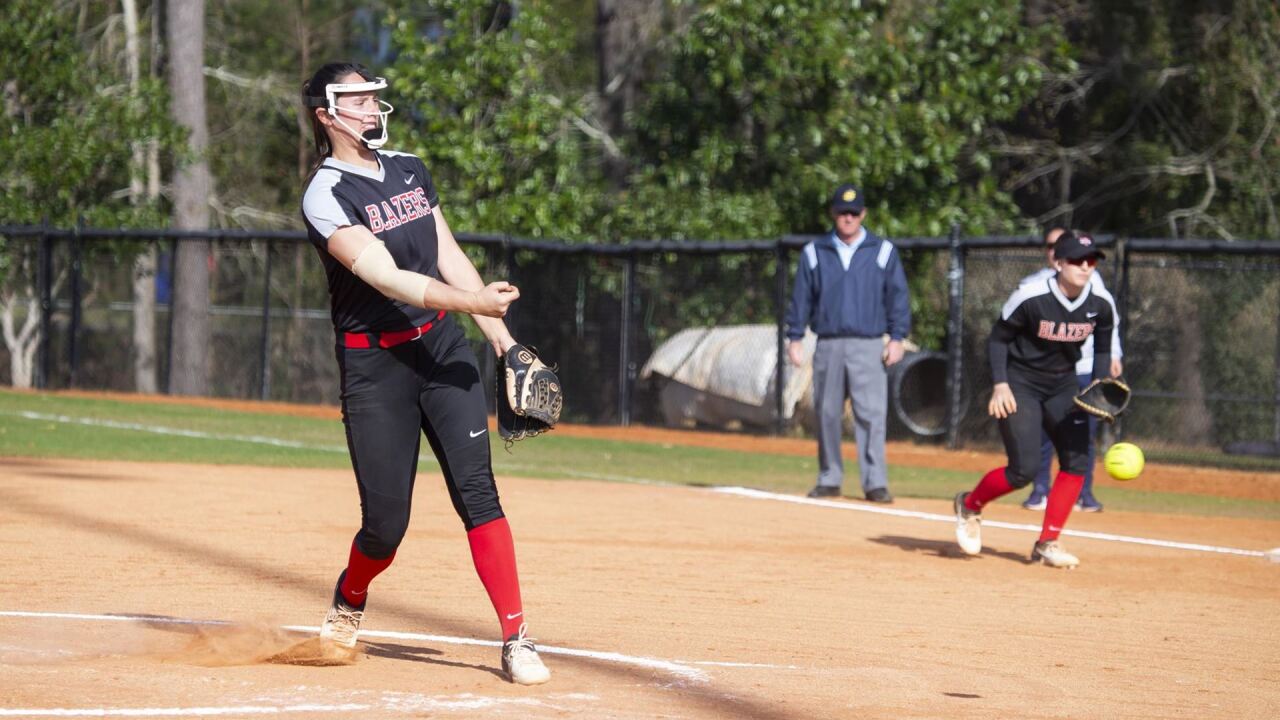 VALDOSTA, Ga. – The No. 15 Valdosta State softball team put up 13 runs in two games and sophomore Samantha Richards tossed a perfect game in the nightcap for a doubleheader sweep of visiting Flagler Wednesday afternoon. VSU won the opener 5-2 and the nightcap 8-0 in five innings.

The Blazers improved to 18-5 on the year, while Flagler fell to 18-8, as the Saints entered winners of their last seven games. VSU hit .349 for the doubleheader with 15 hits, 13 runs, one double, one triple and one home run, while driving in 11. Senior Haley Garrett and junior Nicole Pennington each had three hits, while Pennington tallied a home run and scored three runs. Garrett drove in three in the game.

In the circle, VSU held Flagler to a .143 average as junior Shayne O'Connell tossed a strong game in the opener and Richards threw her first complete game in a five-inning win in the nightcap. Richards fanned nine in the minimum 15 batters faced for nine innings. It was the first perfect game since former Blazer Kasie Johnson tossed the clean game on Mar. 21, 2018, versus Miles College. Richards fanned nine in the game. It was the third no-hitter or perfect for the Blazers this season as O'Connell has two no-hitters this season. VSU struck out the Saints 21 times and had just on walk for the doubleheader.

The Blazers will head to Union to return to conference play in an altered series due to the threat of inclement weather this weekend in Jackson, Tenn. VSU now will face Union in a doubleheader Friday, beginning at 7 p.m. ET, followed by a single game Saturday at 2 p.m. ET.

#15 Valdosta State 5, Flagler 2 (Game One)
VSU got things started in the opener in the bottom of the first as senior Logan Hill singled, followed by a single from sophomore Kiley Robb and senior Lacey Crandall brought both of them home with a two RBI triple off the right field wall. Garrett singled through the left side, plating Crandall for a 3-0 lead. Crandall's three-bagger was the first triple of the season for the Blazers as a team. Flagler hurler Kyra Gipson entered the game with a 1.00 ERA and had allowed just 13 runs in 84.1 innings this season.

A bases loaded walk with one out in the bottom of the second inning made the score 4-0 and Crandall hit a sacrifice fly to center for a 5-0 lead.

Flagler's Morgan Murphy began the top of the fifth with a double to center for the first hit since the first inning for the Saints. A single through the right side with one out put runners at the corners for the Saints. Following a ground out, VSU starter Shayne O'Connell fanned leadoff hitter NaJah Gerald for the third out and her ninth strikeout of the game to end the inning as Flagler left runners at second and third.

Gipson started to find her groove for the Saints, as she retired ten-straight and the third-straight inning of three-up-three-down for the Blazers in the fifth. O'Connell got a quick first two outs in the sixth, but a single to right f from Kyleigh Taylor and a home run from Maria Kappos, her third of the year, made the score 5-2. O'Connell fanned her tenth of the game to get out of the inning.

The Saints used an infield single for one on with nobody out in the top of the seventh. A called third strike on a 3-2 count followed to Brittney Rayfield for one away. O'Connell tallied 12th strikeout for two outs. She then had a 1-2 count to Gerald and got a fielder's choice for the final out.

O'Connell, who was named National Fastpitch Coaches Association National Pitcher of the Week Wednesday, finished allowing six hits, two earned runs, walked one and fanned 12 as she improved to 7-2 on the year. Crandall went 1 for 2 with a run scored and three RBI to lead the team.

Gipson fell to 11-4 on the year as she went six innings, allowing five hits, five earned runs, walked four and fanned three. Kappos was 1 for 3 with a run scored and two RBI on the home run.

#15 Valdosta State 8, Flagler 0 (Game Two)
A single from Pennington on her 21st birthday and a walk put two on with nobody out for the Blazers in the bottom of the first. Robb singled up the middle plating Pennington for a 1-0 lead and Crandall reached on an error on a sacrifice bunt plating the second run of the first inning. A ground out from Garrett plated Robb for a 3-0 lead. With two out, freshman Morgan Hill singled home a run for a 4-0 lead as all nine batters came to bat in the first inning.

Richards was on point for the Blazers early as she racked up five strikeouts in the first six batters through two innings, retiring the Saints in order in each inning. On a 3-2 count with two out in the bottom of the second, Crandall drew a walk for two on base after a 12-pitch at bat. An infield single from Garrett plated a run for a 5-0 lead.

Richards retired 12-straight through four innings and was helped out by a great diving catch from junior Baylee Everson in the fourth inning and had a great diving catch from Garrett in the fifth to preserve the perfect game. On the tenth pitch to Pennington, she took relief pitcher Sidney Mathis yard for Pennington's sixth dinger of the year and a 6-0 lead to begin the bottom of the fourth. Richards then put up her fifth perfect inning as she retired 15-straight.