No. 9 Blazers Roll Past Shorter 99-85 During Home Opener 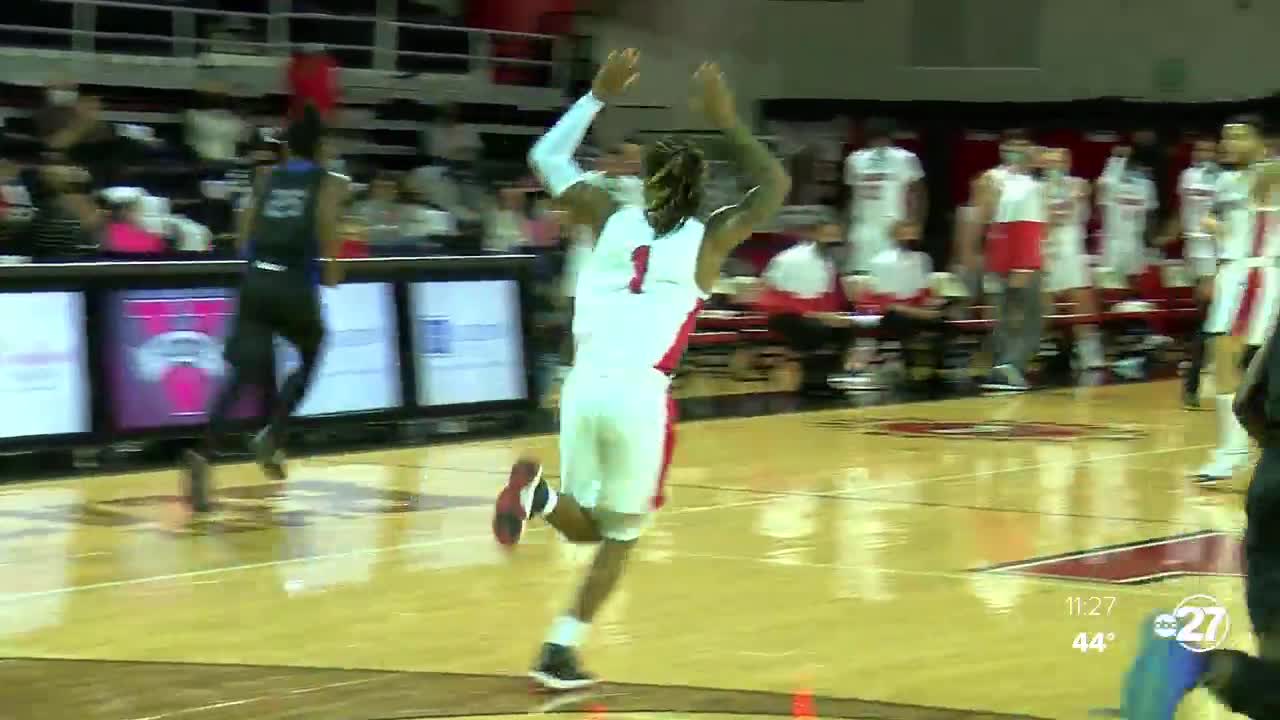 The No. 9 Blazers came away with a win during its home opener Friday night over Shorter with a final score of 99-85.

VALDOSTA, Ga. (WTXL) — The No. 9 Blazers came away with a win during its home opener Friday night over Shorter with a final score of 99-85.

VSU (4-0, 4-0 Gulf South Conference) had help from the Guardian Bank Player of the Game Cam Hamilton who sank four balls from deep which aided his 20 points along with his five rebounds. Cam's 20 was matched by senior Imoras Agee who shot 7 for 12 from the field for 20 points.

The Hawks (1-2, 1-2 GSC) were led by 22 points from senior Charles Botchway, going 8 for 16 (.500) from the field, six of which were from three. The Hawks finished with four players in the double digits for points while shooting 75% from the free-throw line.

The Blazers trailed early in the first half as the Hawks came out with two quick buckets before senior Burke Putnam drilled a three to cut the lead to just one. Both teams kept it close for the next four minutes as the Hawks tied things up at 12 but a pair of free throws from Travis Bianco along with an Agee three and layup gave the Blazers its edge to put its foot on the gas. The Blazers outscored the Hawks 40-21 after breaking the tie to give Valdosta a dominant 52-33 lead heading into the locker room.

The Blazers went 16 for 30 from the field (.533) while the Hawks shot 14 for 31 (.433), as the Blazers hit eight baskets from deep (.571). There was a close battle on the boards throughout the first 20 minutes of play, but the Blazers edged the Hawks by three with a first-half total of 17. Along with its struggles on the offensive end, the Hawks turned the ball over nine times, almost twice the amount of the Blazers.

The Hawks came out of the locker room with a trey ball from Botchway but Bianco was able to help the Blazers maintain the lead with a pair of free throws, remaining perfect from the line. A jumper from junior Bentley Grove cut the Hawk lead down to 14, but the Blazers maintained its lead as that would be the smallest point margin for the remainder of the game.

Valdosta led by as much as 25 points three more times from there before the bench came on the court. A couple of balls from beyond the arch from Botchway cut the lead down slowly for Valdosta as time was winding down, but it wasn't enough for the Hawks as Valdosta hung around to win their fourth game of the season 99-85.

Despite the score, the Hawks finished Friday's matchup with a better field goal percentage than the Blazers, shooting 35 for 68 (.515) while the Blazers shot 32 for 63 (.508). Both teams shot 12 for 28 (.429) from deep but the big factor at the conclusion of the game was Valdosta's free throws.

The Blazers saw the line 25 times and were able to make 23 of those attempts (.920) while Shorter only saw the line four times, making just three (.750). Agee led the team in rebounds, bringing down seven where junior Jacolbey Owens dished out the most assists with five.

VSU is back in action against Shorter Saturday at 2 p.m. to finish off the weekend double-header before facing off against West Florida Tuesday, Jan. 12 at home.