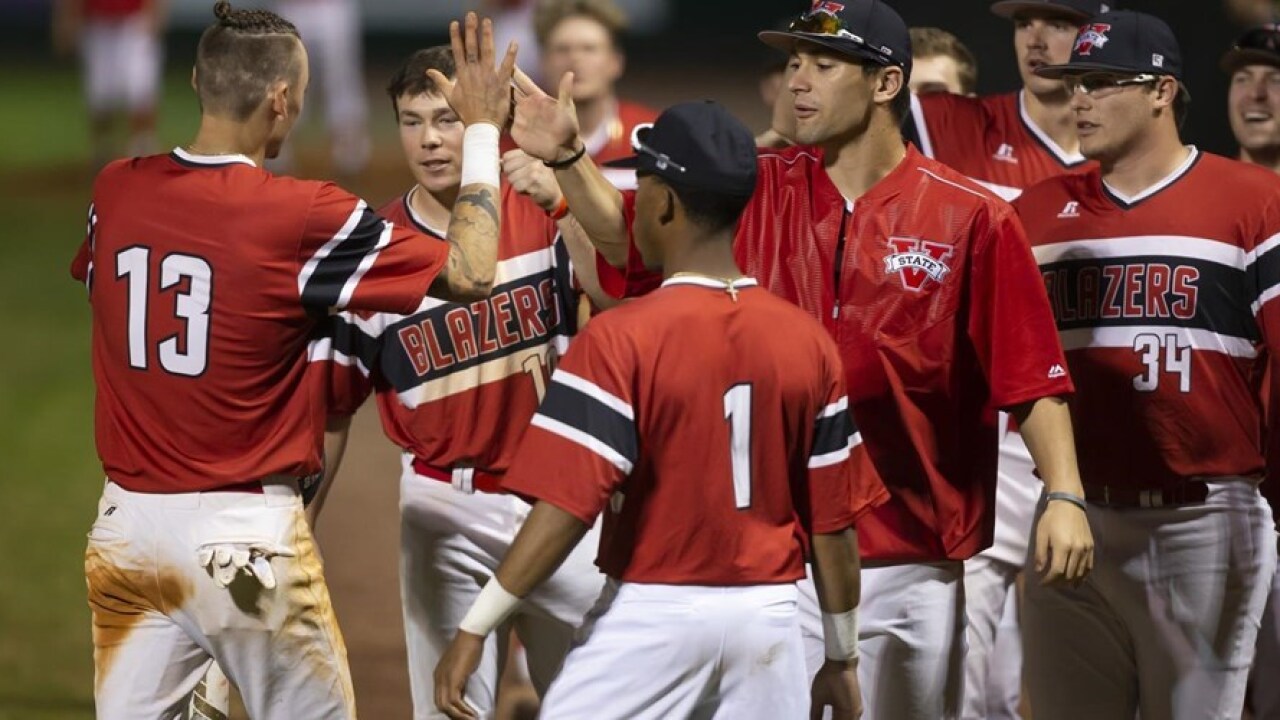 OXFORD, Ala. – In one of the most thrilling games of the 2019 Gulf South Conference Championship, the cardiac Valdosta State baseball team battled back from a pair of deficits and plated five runs in the top of the 11thinning for a 12-7 victory over West Georgia Monday afternoon in an elimination game.

The Blazers (30-20) move onto Championship Tuesday and keep their NCAA Tournament hopes alive with the win as West Georgia most likely ends its season at 28-25. VSU will meet the winner of the Delta State vs. West Florida game tomorrow at 12 p.m. ET. If Delta State beats West Florida today, there will be three teams remaining heading into tomorrow. In that scenario, the VSU/DSU winner would then play West Florida for the championship at approximately 3 p.m. ET. This marks the first time since 2013, the last time VSU won the conference title, the Blazers have played on championship day.

Tuesday's game will be broadcast on 92.1 WDDQ FM with Chris Caray having the call. Fans can access links to live stats, audio/video streaming, ticket information and more at vstateblazers.com on the baseball schedule page.

Thrillers have been a theme of the Blazer baseball team as of late as they walked-off Alabama Huntsville Sunday evening with a 1-2 count, two out RBI single from sophomore Seth Caballes in the bottom of the ninth for a win. Today, VSU took its first lead of the game in the eighth inning, plating three runs, but allowed two in the bottom of the frame to trail 7-6 in the top of the ninth. The Blazers plated the equalizing run in the top of the ninth and then exploded for five runs in the 11thfor the victory.

After opening the game with three runs in the first two innings, VSU went cold and didn't score until the eighth with UWG building a 5-3 lead to that point. VSU found new life as junior Jowenrick Daantjireached on a fielding error and senior Josh Broughton doubled him home for a 5-4 score. Junior Logan Stephens then singled up the middle, plating Broughton for a 5-5 game and then junior Mike Christopoulos singled home Stephens for a 6-5 lead.

The lead was short lived, however, as UWG began the bottom of the frame with a single and then a throwing error by the Blazers on a sacrifice bunt put two on with nobody out. Another sacrifice bunt moved the runners to second and third. VSU brought in junior Bryce Van Horn to pitch for senior Call Graham and Lane Griffith came up with a two RBI single to left center for a 7-6 lead.

Down to their final at bat, VSU drew a leadoff walk for junior Jordan Holt off UWG closer Drew Hayles. The third error of the game by the Wolves put two on for the Blazers as senior Mack Hathcockreached on the miscue. UWG decided to load the bases with the intentional walk and senior DJ Kingreached on a fielder's choice plating the tying run.

UWG loaded the bases in the bottom of the ninth off junior Sean Gable, but the Blazers turned a huge double play to end the threat sending the game to extra-innings. VSU went down in order in the top of the tenth.

Gabel retired the first two batters of the bottom of the tenth, but Tucker Breen, the number nine hitter in the UWG order, doubled to right center for his second two-bagger of the game. Gabel then got Brian Dansereau to ground out ending the threat.

In the 11th, Hathcock and Daantji each drew one out walks as Cason Greathouse relieved Hayles. Hathcock and Daantji both stole bases getting into scoring position. Broughton came up huge with a two RBI single to left center on a 1-2 count and Stephens doubled home Broughton, followed by a Christopoulos RBI single for an 11-7 score. Williamson scored the 12thrun on a sacrifice bunt for a 12-7 lead.

Pitching in his third inning, Gabel retired the Wolves in order for the huge win as he improved to 3-2 on the year, going three innings, allowing one hit, walked two and fanned one, basically shutting down the UWG attack in the final three frames. Hayles (3-5) took the loss for the Wolves, going three innings, allowing one hit, three runs – two earned, walked four and fanned four.

VSU tallied 12 runs on nine hits with two errors as it was the second game this season to go 11 innings. The Blazers are now 1-4 in extra-inning games this season. Broughton finished the game 3 for 5, a double, three RBI and two runs scored. Stephens was 2 for 4, a double, two runs scored and three RBI. Christopoulos was 2 for 5 with two RBI as he came off the bench and had some clutch at bats.

VSU opened the game with a run in the top of the first as the Blazers loaded the bases with one out. Stephens walked for an RBI and a 1-0 lead. UWG got out of the inning, turning a double play.

In the second, Williamson began the frame with a single through the left side and Caballes was plunked by a pitch and a sacrifice bunt moved them into scoring position. Hathcock reached on a fielder's choice RBI for a 2-0 lead and then Caballes scored on a failed pickoff attempt error for a 3-0 lead.

UWG hurler Wes Bucher settled down and retired the Blazers in order in the third and fourth innings, but it was the Wolves who picked it up in the fourth inning as they scored four runs without recording an out, off VSU junior starter Alex Tyson. Three of the runs came on a home run from Dan Oberst and then Dylan Johnson scored the fourth run on an RBI single for a 4-3 score. VSU brought in junior Anthony Dahl for Tyson as he got out of the inning without further damage.

UWG used a double down the line to begin the bottom of the seventh and then an RBI single from Logan Taylor for a 5-3 lead.