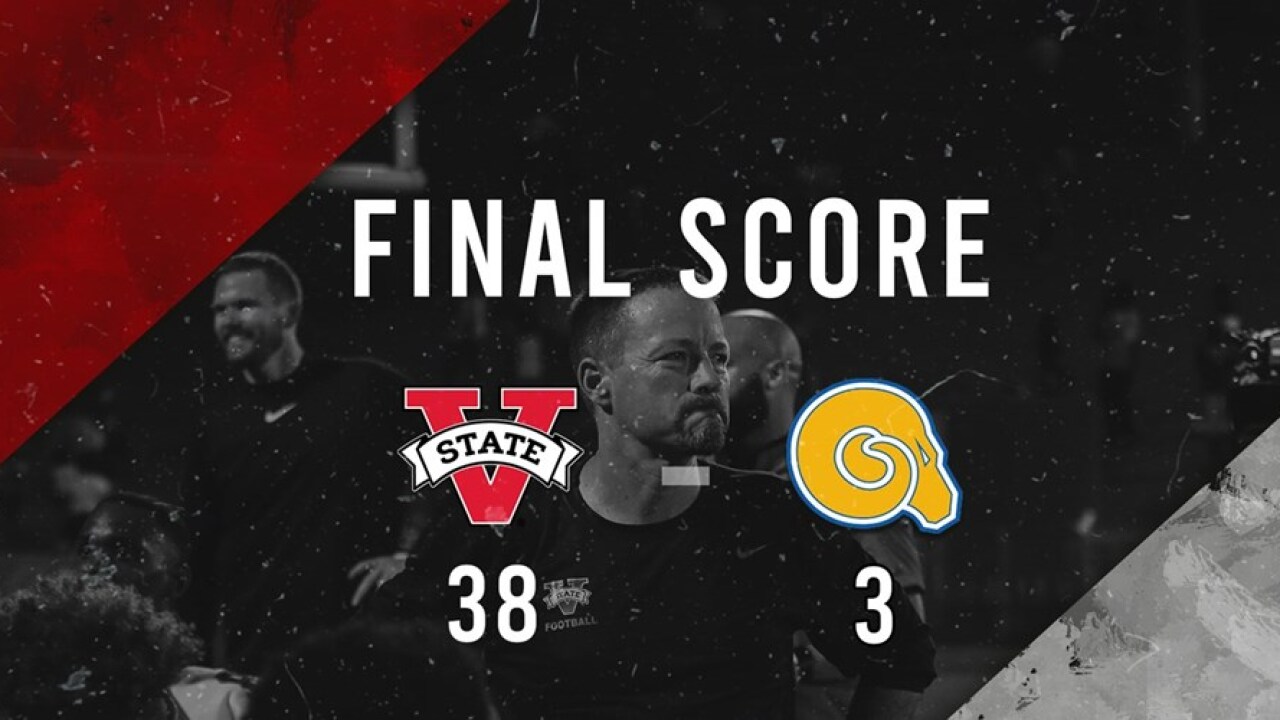 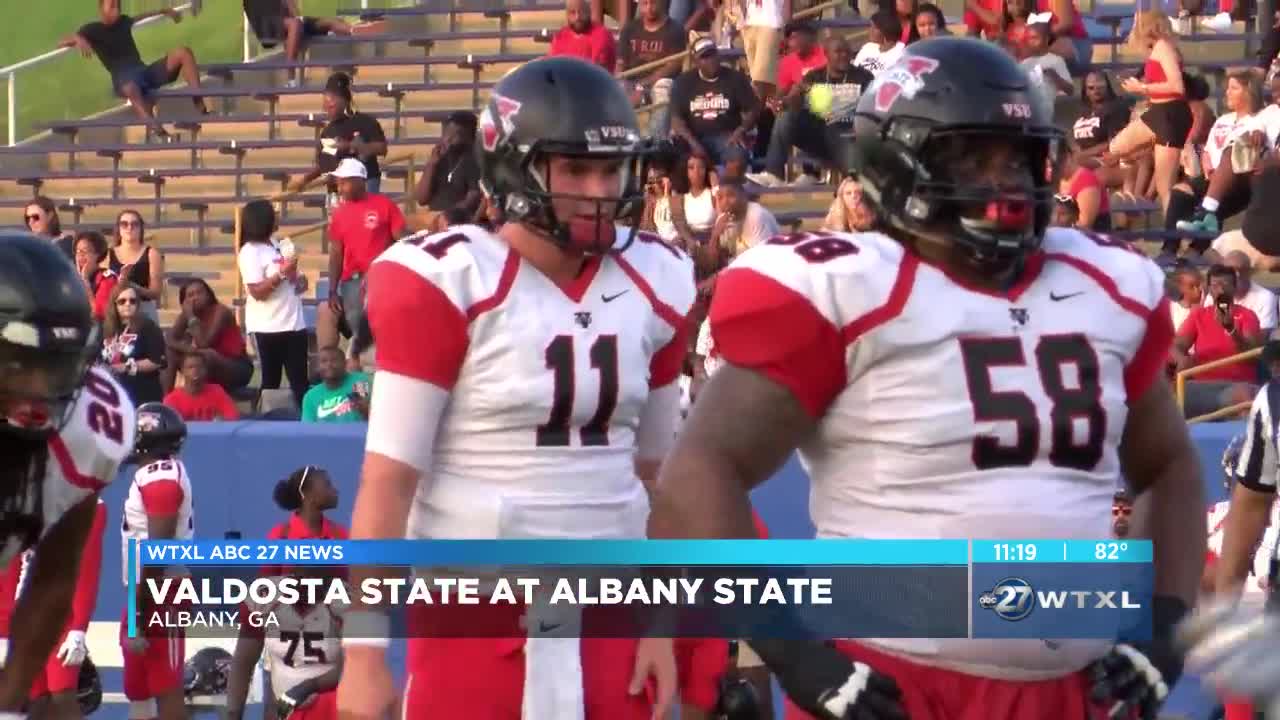 ALBANY, Ga.- The No. 1-ranked Valdosta State football team opened the 2019 season with a commanding 38-3 victory at Albany State Saturday evening, getting the new head coach Gary Goff era off on the right foot.

The Blazers marched down the field with a methodical drive as the team converted a third and ten and a third and five as Wells used his feet for the first conversion and then found junior Brian Saunds for seven yards. On third and two on the ten, sophomore running back Seth McGill scampered ten yards for a score and a 7-0 lead with 6:27 left in the first quarter. The drive saw 12 plays for 97 yards on the first drive of the season for the Blazers.

VSU came up big on defense, once again, as Kelias Williams tossed his first two of two first half interceptions on the ensuing drive. Junior Cory Roberts stepped in front of Williams' toss for a return of 11 yards to the ASU 30.

The Blazers converted the fourth third down of the quarter as Wells found junior Kenny Benjamin for six yards and then hit sophomore David White for 16 yards to the ASU three. On third and goal, sophomore Jamar Thompkins scored from a yard out and a 14-0 lead.

ASU had its first big play of the game as Williams rushed 30 yards to the VSU 26 on the ensuing drive to end the quarter. Early in the second, VSU stopped ASU on a third and four from the 20 and Gabriel Ballina pushed a 38-yard field goal wide left.

The Blazers then used another six-plus minute drive for a 21-0 lead, highlighted by a 12-yard scamper from McGill and a 20-yard run from Wells on a first and 15. Sophomore Ivory Durham hit Saunds for 15 yards on the drive and Wells then found McGill for a six-yard strike and the 21-0 lead with 6:23 left in the half.

VSU again was opportunistic on defense as senior picked off Williams at the ASU 45 and returned it to the Golden Ram one-yard line as McGill scored from a yard out for a 28-0 lead with 4:16 left.

The Golden Rams used a 50-yard run from Tracy Scott for the biggest play of the half by ASU, but the VSU "D" held tough and ASU kicked a 39-yard field goal for a 28-3 lead at intermission.

VSU missed a field goal on its first possession of the second half, but forced the Golden Rams into a punt. Wells found senior Darrell Myers for a big gain and a first down on the next offensive possession for the Blazers. ASU stopped the Blazers after a couple of penalties by the Blazers for the first punt of the game by VSU as redshirt freshman Tyson Shaw boomed the punt to the ASU 15.

The Golden Rams moved down the field for their best drive of the game to that point and moved to the VSU nine for a third and five as the fourth quarter began. Williams' pass was incomplete for a fourth down and the Golden Rams turned the ball over on downs deep in VSU territory.

On a big third down, Wells threw a great pass on a blitz by the Golden Rams, finding Benjamin for a 27-yard gain setting the Blazers up in plus territory. Durham then called his own number from four yards out for a 35-3 lead with 8:16 left in the game. It was another long drive from the Blazers is they used 7:11 on the clock and went 11 plays for 92 yards.

Following an ASU punt, VSU moved the ball once again down the field as sophomore Fernando Ramirez connected on a 27-yard field goal for a 38-3 lead with 31 seconds left.

Wells was 21 of 24 for 207 yards and two scores, while Durham was 3 for 3 for 31 yards. Saunds had six catches for 73 yards to lead the team, while the running back accounted for three of the scores. Senior Quahlin Patters had a team-high 51 yards on the ground and the tandem of McGill and Thompkins combined for 21 carries for 84 yards and two scores.

Defensively, VSU was led by senior Nick Moss with nine tackles, while Roberts had four tackles with one interception and Brown had the other pick. VSU tallied four tackles for loss for 10 yards in the game.

This game marked the first time since Oct. 10, 2013, with VSU as the No. 1-ranked team in the country. The Blazers improved to 20-6 all-time as the top-ranked team. VSU improved to 19-2 all-time against the Golden Rams.

The Blazers return home for the 2019 home-opener Saturday at 6 p.m. versus Ohio Dominican at Bazemore-Hyder Stadium. Tickets are on sale now for the game. Call 229-333-SEAT or visit the VSU Athletic Ticket Office in The Complex.