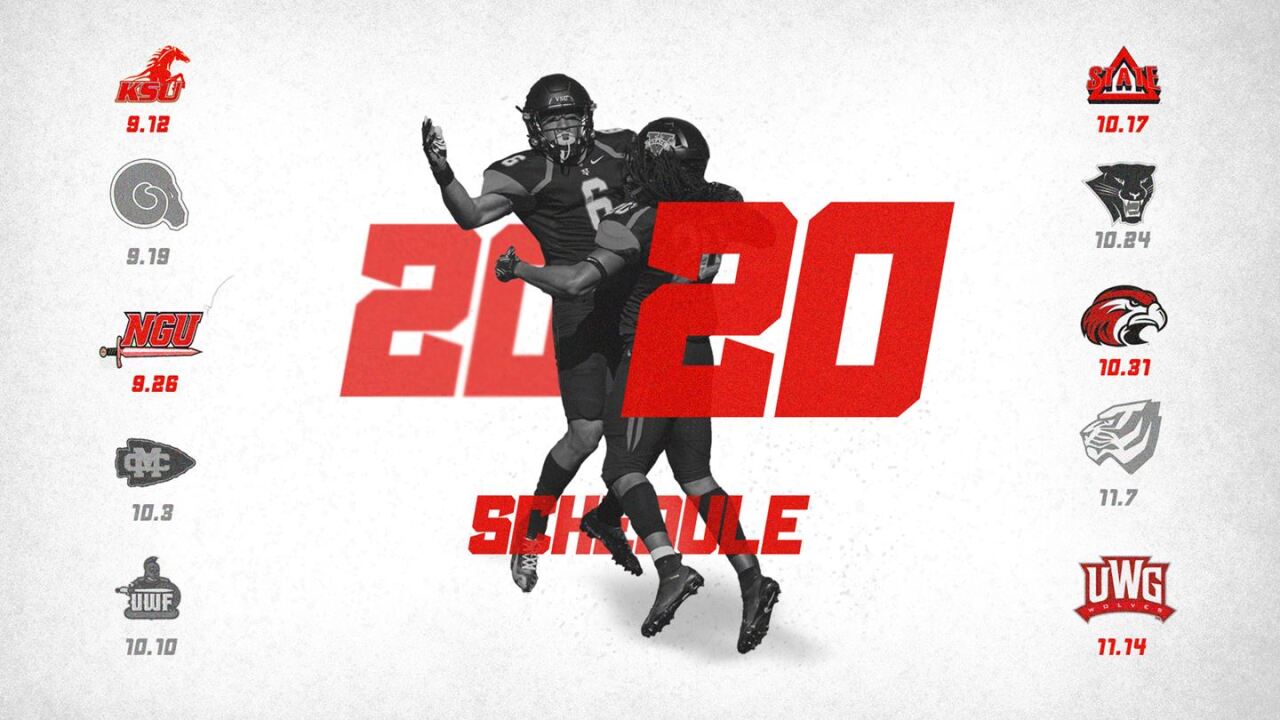 "I am very excited about our upcoming schedule, which consists of some key Gulf South Conference matchups at home," VSU head coach Gary Goff said. "Playing in the GSC already provides us with a very strong strength of schedule, but we have added to that strength of schedule with two very good teams for non-conference play."

The season begins with Southern Intercollegiate Athletic Conference (SIAC) foe Kentucky State on Sept. 12 at Bazemore-Hyder Stadium. The Blazers open the season a week after the official start date and will play ten-straight weeks this season as the bye week is the first week of the season.

Kentucky State is coming off a 7-3 record and a 3-3 mark in the SIAC, marking the first winning season for KSU since 2011. The Thorobreds downed two Division I institutions last year, beating Robert Morris 13-7 on the road and won at Jackson State, 33-25, at Lucas Oil Stadium in Indianapolis, Ind. The Blazers and the Thorobreds last met Oct. 1, 2016, in Waycross, Ga., in the Okefenokee Classic with VSU winning 48-10.

VSU then makes its first road trip of the season back at Albany State for the second year in a row as the series begins a new two-year agreement on Sept. 19. Last season, VSU won 38-3 at Albany State in the season-opener as the Blazers won their first ten games of the season and 25-straight, dating back to the final game of the 2017 season for Gulf South Conference record for consecutive victories. VSU suffered a heartbreaking 38-35 loss to eventual national champion West Florida in the second round of the NCAA playoffs to end the 2019 season with a 10-1 record.

The Blazers open the 2020 Gulf South Conference slate with North Greenville on Sept. 26 in Valdosta. The teams played a crazy game in the rain last year in Tigerville, S.C., where VSU junior quarterback Rogan Wells scampered 40 yards for a touchdown on fourth down with 49 seconds remaining. VSU pulled out a 20-15, come-from-behind victory. VSU has won 17-straight Gulf South Conference regular season games dating back to 2017.

Back-to-back road games follow at Mississippi College (Oct. 3) and at UWF on Oct. 10, where VSU will look to avenge the playoff loss from a year ago. The Blazers are 2-0 all-time in Pensacola and won 48-21 in 2018, scoring 31 unanswered points.

The Blazers head to Florida Tech for a Oct. 24 date, and then return home to host Shorter on Halloween. The month of November begins with a trip out to Livingston, Ala., against West Alabama on Nov. 7, and then the regular season concludes with the annual Peach Basket game against rival West Georgia in Bazemore-Hyder Stadium on Nov. 14.

VSU won an absolute thriller in 2018 versus the Wolves as both teams entered 9-0 with VSU winning 47-31 to win the program's seventh GSC title to that point. Last season, VSU won in Carrollton, also in the regular season finale, 42-14 to win its second-straight league crown and a perfect 10-0 regular season.