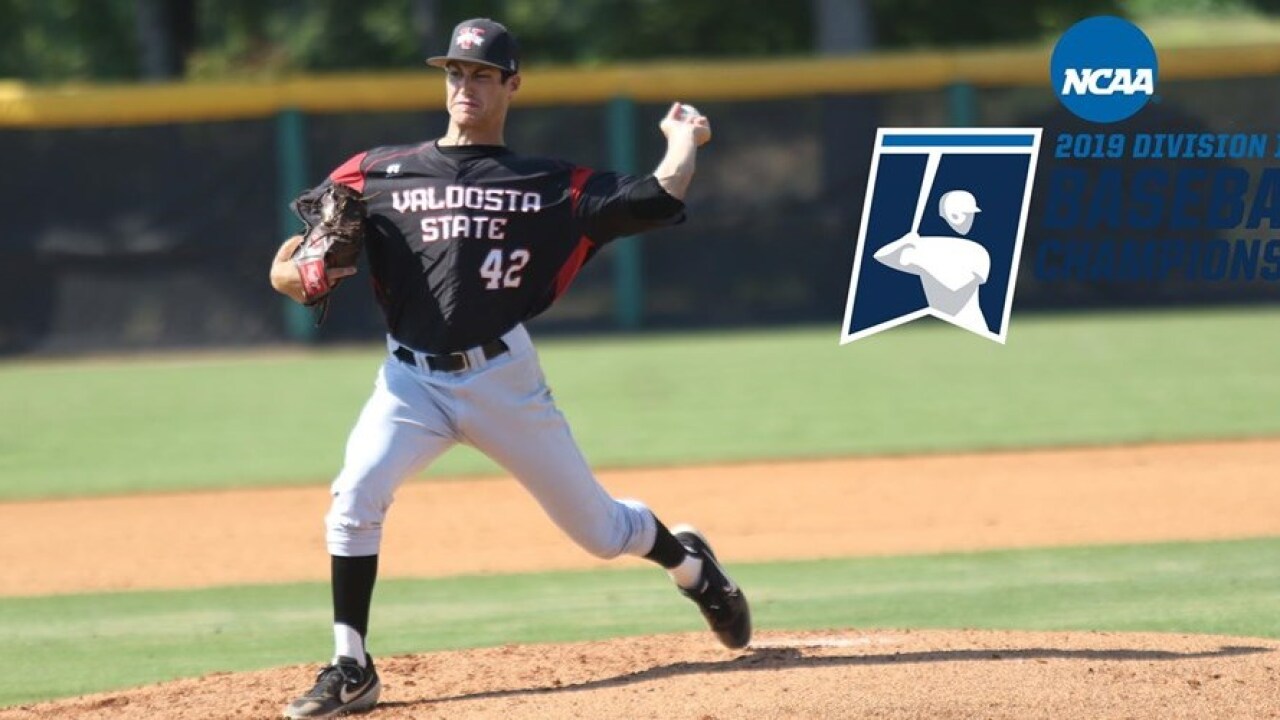 CLEVELAND, Miss. – Behind a complete game, six-hitter from junior Tristan Cone , the Valdosta State baseball team jumped on No. 18 Eckerd College early en route to a 6-1 win Thursday in the first game of the NCAA South II Regional at Delta State University. VSU now will face the winner of the DSU vs. Embry-Riddle game Friday at 1 p.m. ET.

Cone (5-1) was masterful in a duel with Eckerd starter Dillon McCollough, who was named Sunshine State Pitcher of the Year and D2 Conference Commissioner's Association (D2CCA) South Region Pitcher of the Year. Cone scattered six hits, fanned nine and walked one, allowing one run in the bottom of the ninth inning.

McCollough (8-2) went seven innings, allowing 15 hits, six earned runs, walked two and fanned four in the loss. VSU hit him early and often, plating all six runs in the first five innings of the game. Along with the strong pitching performance, VSU also came to play on the offensive end, recording 17 hits in the game as senior Mack Hathcock , junior Jowenrick Daantji and senior DJ King each had three hits in the game, as eight different Blazers recorded a hit in the contest.

Senior Josh Broughton belted his team-leading fifth home run of the season to dead left field in the third for a 3-0 lead and the Blazders added another run in the fourth with two out on a single, walk and a RBI single from Hathcock for a 4-0 lead.

Cone worked out of a two on jam in the bottom of the fourth as the first of two miscues by the Blazers put two on base with two out. Cone fanned Nick Arrivo for the third out to get out of the inning. In the fifth, Daantji began the frame with a single, stole second and moved to third on an error. Broughton singled him home for a 5-0 lead and junior pinch-hitter Parker Stephens came up with a RBI single with the bases loaded for a 6-0 score.

It was Cone's second complete game of the season and first complete nine-inning game. His nine strikeouts tied his season-high set against Wingate on Feb. 7, 2019. Check back with vstateblazers.com to see who VSU will face Friday.