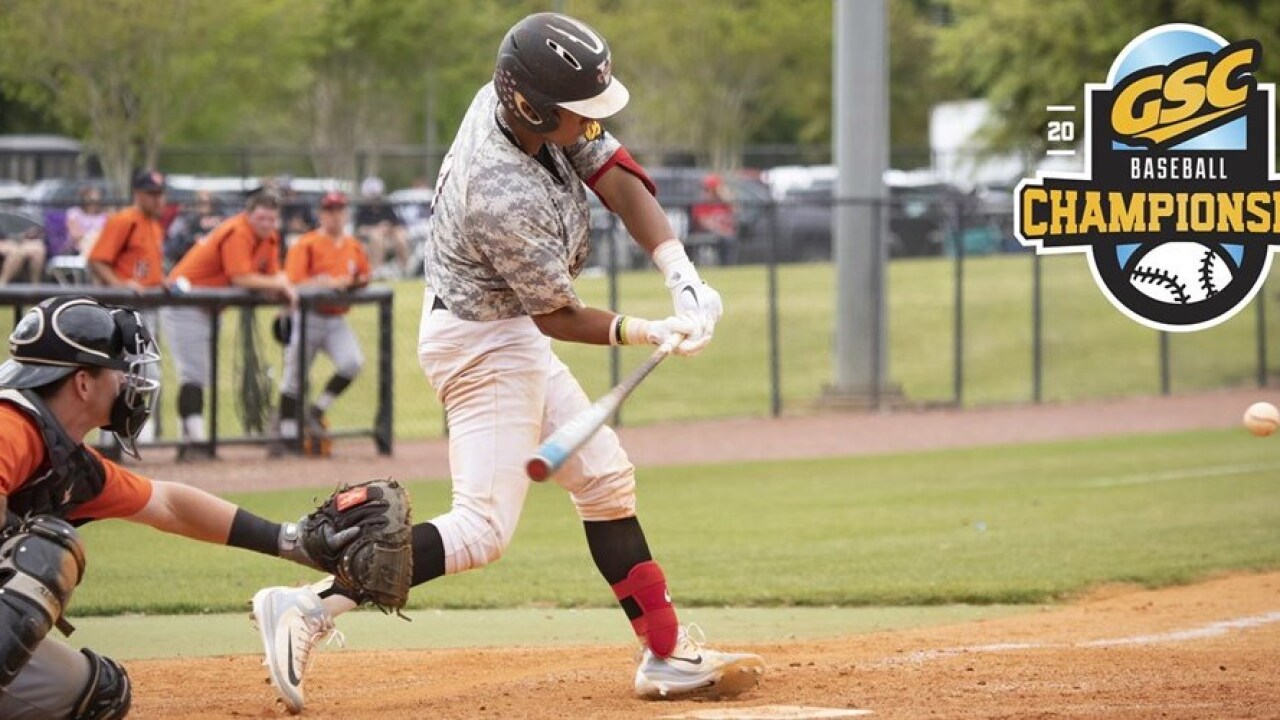 OXFORD, Ala. – Valdosta State sophomore Seth Caballes hit a bases loaded single through the right side on a 1-2 count with two out in the bottom of the ninth inning against Alabama Huntsville for a 5-4, walk-off victory Sunday evening in a Gulf South Conference Championship elimination game. VSU trailed 2-0 in the first inning and took its first lead at 4-3 in the seventh, before UAH tied the game in the top of the ninth.

VSU now will play Monday against an opponent and at a time to be determined, based on how many teams remain in the championship. Check back with vstateblazers.com for the updated information on Monday's game. Chris Caray will have the call of the game on 92.1 WDDQ FM. Links to live stats and audio/video of the game will be available at vstateblazers.com on the baseball schedule page when it becomes available.

The gritty Blazers (29-20) loaded the bases in the bottom of the ninth inning with two out as senior Josh Broughton got the rally started with a single to right field and senior DJ King followed with a an infield single. A hit batsmen followed and Caballes used the 1-2 count single through the right side for the game winner, plating Broughton as the Blazers' hopes of a conference title and NCAA postseason berth continued.

The Chargers (27-21) tied the game in the top of the ninth as Drake Hollingsworth began the frame with a triple to right center. Following an out by senior reliever Trevin Eubanks, who had stymied the Charger attack with big outs in his 3.1 innings of work, UAH pinch-hitter Malave Bettinger singled to center, plating Hollingsworth for a 4-4 score. Broughton came in to pitch following the score for the Blazers and picked off Dorien Jenkins at first base as he was used as a pinch-runner for the second out. Broughton retired Will Acuff for the third out, preserving the tie.

Prior to the run by UAH in the ninth, VSU found its momentum in the bottom of the seventh as senior Mack Hathcock drew a leadoff walk and junior Jowenrick Daantji plated him with a RBI triple down the right field line to tie the game at three. Later in the inning, King hit a sacrifice fly plating Daantji for a 4-3 lead.

For much of the game, both teams were able to get hits and put runners in position, but were unable to come up with the timely hit for RBIs. The Blazers left 11 stranded in the game, while AUH left 14 on base.

UAH opened the game with two runs in the top of the first inning as Garrett Bodine began the game with a solo home run to center field on the very first pitch of the game from VSU junior hurler Cooper Cain. A double from Nolan Ramsey turned into a run on a sacrifice fly from Palmer Ford for a 2-0 lead.

UAH scored a run in the top of the third for a 3-1 lead, highlighted by a Ramsey double and a Landon Ezzell RBI single, but Cain limited the damage to just the one run. In the bottom of the fourth, the Blazers pulled within 3-2 as junior Mike Christopoulos came up with a RBI single to right center with two away.

In the fifth, Cain worked out of another big jam as UAH loaded the bases with a double from Ford and a pair of walks as Cain rallied with a big strikeout from Acuff to end the threat.

Back-to-back singles from VSU in the bottom of the sixth with one out looked promising, but UAH went to the bullpen in favor of Tyler Bell for starter Harper Case. Bell calmly fanned one and induced a fly out to get out of the inning.

Following the big inning by the Blazers in the seventh, Eubanks came out for the eighth and Bodine singled to center to begin the frame, followed by a hit batsmen and a sacrifice bunt moved the runners to second and third. After a mound visit by head coach Greg Guilliams, Eubanks fired two huge strikeouts to get out of the inning.