Blazers move on to 21 straight wins 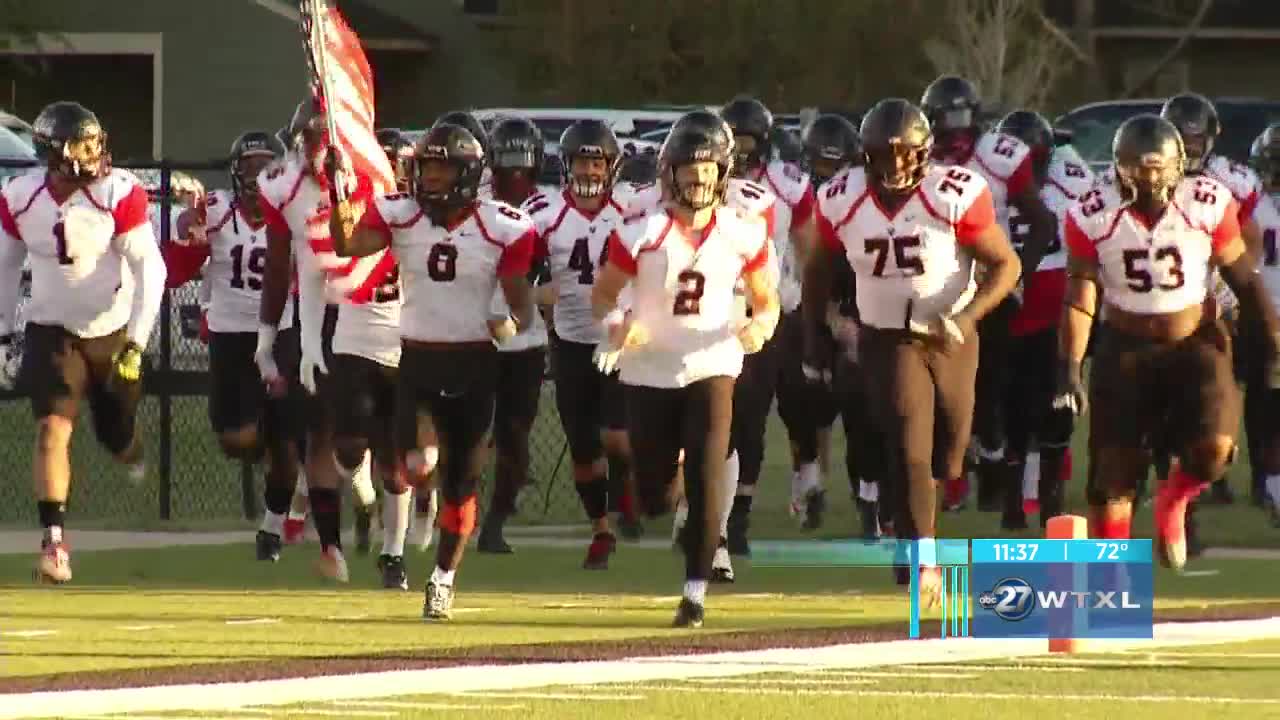 Behind 580 yards of offense, including 358 rushing against the Gulf South Conference's top rushing defense as DSU entered allowing 95.2 yards per game on the ground for 22nd nationally. The Blazers had 222 passing yards and totaled 70 plays for the game. Defensively, the Blazers held DSU to 359 yards, including 170 passing and 189 on the ground.in 73 plays.

The Blazers improved to 6-0 overall for the seventh time in program history and it marked the 196th win in Gulf South Conference play as the Blazers now stand at 4-0 in league play. Delta State fell to 3-3 on the year and 2-2 in conference play. VSU moved to 18-20-1 all-time against DSU and evened the series all-time in Cleveland, Miss., at 10-10-1.

The Statesmen won the toss and took the opening drive as DSU used a 3rd and 1 run from quarterback Breck Ruddick for 47 yards to the VSU 19. The VSU "D" stiffened as DSU kicker Taylor Crabtree hit a 37-yard field goal for a 3-0 lead with 12:40 left in the first quarter. The field goal by Crabtree marked the first time all season VSU has trailed as it was the last team to not trail in a game in NCAA Division II this season. VSU ended up trailing for just 4:12 for the game.

VSU methodically marched down the field as, on the first play from scrimmage, sophomore running back Jamar Thompkins ran 22 yards and junior quarterback Rogan Wells hit junior Lio'undre Gallimore for 24 yards to the DSU 11 later in the drive. The Blazers settled for a 27-yard field goal from sophomore Fernando Ramirez to tie the game just 4:04 minutes later.

Following a three-and-out by the Statesmen, VSU used two rushes for 16 yards by Thompkins and Wells hit sophomore David White for 47 yards and a touchdown for a 10-3 lead with 5:57 left in the first quarter.

DSU kicked a field goal from 22 yards on its next possession as the Blazers benefitted from a 46-yard kickoff return from Thompkins and moved to the DSU 18 early in the second half, but Ramirez came up wide left on a field goal.

After a punt from the Statesmen, VSU used a great 10-yard rush from Wells on a 3rd and eight and then completed a 3rd and five with a pass to junior Brian Saunds for 40 yards to the DSU 14. Ramirez hit his second field goal from 35-yards and a 13-6 lead with 7:22 left in the half.

Delta State punted on its next possession and then, on 4th and five from the DSU 41, VSU ran the fake punt with junior defensive lineman and special teams standout, Arrington Dulin, who scampered 23 yards, setting up a Wells touchdown pass over the middle to Saunds for a 20-6 lead with 28 seconds left in the half.

VSU tallied 317 yards in the first half with 166 through the air and 151 rushing, while holding DSU to 1999 yards on 76 passing and 123 rushing. Wells was 10 of 15 passing with two touchdowns, while Thompkins had six rushes for 47 yards and Saunds had three catches for 71 yards and a score. The game had just one penalty by the Blazers for five yards in a very quick first half.

On the first drive of the second half, VSU had a 3rd and seven at its own 38, Wells' pass was high and tipped on a long pass Tim Irvin made the interception, marking the first interception of the season thrown by Wells. Ruddick hit Cam Shelton for 18 yards down the sideline and Rico Owens II scored on the ground from 12 yards out for a 20-13 VSU lead with 12:51 left in the third quarter.

The Blazers quickly found the rhythm again and responded quickly as Wells used a pair of big plays, including a toss to redshirt senior Travis Taylor for 23 yards and Thompkins scored his second touchdown of the game for a 27-13 score with 10:17 left in the third, using just 2:28 on the clock.

DSU was marching down the field, but a big fumble recovery by senior Darius Smalls gave the ball back to the Blazers. On 3rd and five from the VSU 49, the Blazers got an offsides penalty on DSU for a first down.

The Blazers were driving and sophomore Ivory Durham rushed down to the DSU 16 and was on the ground rolling over, but DSU's Junior Faulk somehow was credited with the fumble recovery after a discussion by the referees at the DSU 16. The VSU defense stiffened, once again, and forced DSU to punt.

Following punts by both teams early in the fourth quarter, VSU used drive of 4:47 leaving 5:23 on the clock as DSU marched down to the VSU 14. On 4th and four, Ruddick's pass fell incomplete as DSU turned it over on downs with 2:04 left.

VSU looked to run out the clock as sophomore Seth McGill ran 11 yards on first down and then five more on second. After a timeout by the Statesmen, Wells went to the outside on a rush for 70 yards and no one could catch up with him for a touchdown and a 34-13 score.

Ruddick went 20 of 40 passing for 170 yards, while he rushed 12 times for 123 yards. Owens had the lone touchdown for the Statesmen.

The Blazers return home for Homecoming 2019 Saturday, Oct. 19 at 3 p.m. at Bazemore-Hyder Stadium versus Florida Tech.