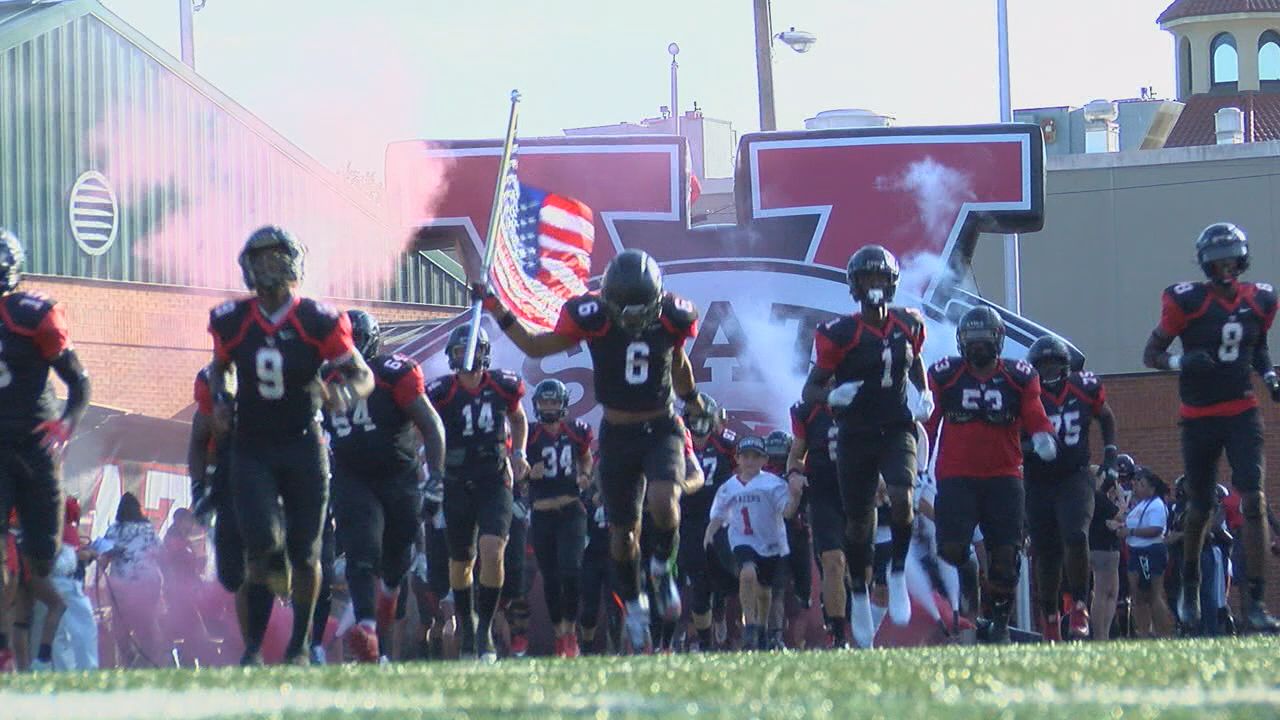 "He's probably the fastest guy on the team (Durham), other than LC (Gallimore)," Wells said. "When he has the ball in his hands, he can run or throw. We try and use him a lot, because he gives us that edge. When he comes in, I feel like the whole game changes."

Durham had an electrifying start to the game as he lined up on the first play from scrimmage as he took a lateral from Wells and found junior Lio'undre Gallimore for a 58-yard touchdown pass and a 7-0 lead just 1:34 into the game.

Not only did the ground game work for the Blazers, but also the passing game as the team was 19 of 29 for the game with no interceptions and 327 yards with two touchdowns. Junior Lio'undre Gallimore had a game-high 133 yards on five catches and a score, highlighted by an outstanding diving catch.

Defensively, VSU also was outstanding for much of the game as the team tallied five sacks for a staggering 49 yards as sophomore Thomas Incoom had three sacks for 25 yards and 3.5 tackles for loss for 27 yards and a forced fumble, along with two hurries. VSU tallied nine tackles for loss for 67 yards in the contest. Senior Nick Moss, once again, led the team in tackles with seven. The Blazers held ODU to just 13 rushing yards on 27 carries for a 0.5 average, while the Panthers had 210 yards passing in the game for 223 total.

Later in the initial quarter following the third punt by the Panthers, VSU began at the ODU 49 after a great return from junior Brian Saunds. McGill had two double-digit rushes for a combined 31 yards and Thompkins scampered 15 yards to the three yard-line. Wells hit junior Kenny Benjamin for a score and 14-0 lead with 2:41 remaining in the quarter.

Ohio Dominican (1-1) completed a third and 17 on its next possession, prolonging the drive as Evan Ernst hit Devanaire Conliffe for a 46-yard strike and a 14-7 score with 23 seconds left in the quarter. On the ensuing drive, McGill scored from one yard out for a 21-7 lead with 11:53 left in the half.

The Panthers converted three first downs on their next possession and found pay dirt as Ernst scored from seven yards out for a 21-14 score as the teams began matching score-for-score. VSU responded in kind as Wells hit Gallimore for a great diving catch to the ODU two. Thompkins scored on the ensuing play for a 28-14 lead.

The scored on Wells' ten-yard run in the third and then the Blazers added two more scores in the fourth for a 48-14 score. ODU scored a late touchdown as Conliffe caught his second score of the night for a 48-21 final margin.

Ernst was 18 of 27 passing for 210 yards and two scores, while Conliffe had five catches for 131 yards and the two touchdowns. Jayden Davis and Camren Moore each had 13 tackles for the Panthers to lead the team.

The Blazers continue at home next week as they open the 2019 Gulf South Conference slate versus West Alabama at 7 p.m. at Bazemore-Hyder Stadium.