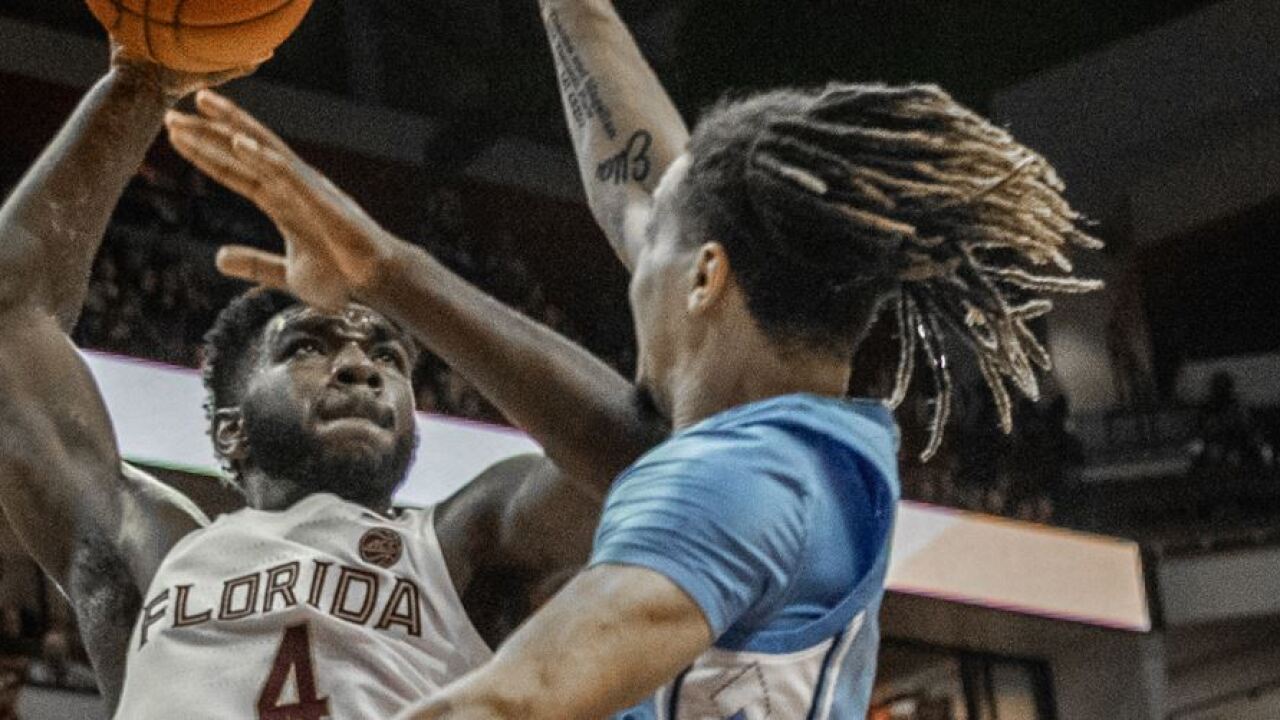 TALLAHASSEE, Fla. – Patrick Williams grew up in Charlotte, N.C., was the top recruit in his home state and has friends on the roster at the University of North Carolina.

And yet, in the moments before he and his Florida State teammates took the floor to take on Williams’ home-state Tar Heels, the freshman didn’t show any sign of extra nerves, extra excitement or extra anything in between.

“He just lets the game come to him,” senior Trent Forrest said. “It’s just kind of natural for him, and, once he gets out there, he’s good to go.”

The latest in a series of promising freshmen to play for coach Leonard Hamilton, Williams was perhaps as good he’s ever been on Monday night. He scored 14 points, added a career-high nine rebounds and was near-perfect from the floor in No. 8 FSU’s 65-59 victory over UNC in front of 10,015 fans at the Donald L. Tucker Center.

Forrest added another 14 points for the Seminoles (19-3, 9-2 ACC), who have won 18 consecutive home games dating back to last season.

“It was just another game for me, just another opportunity to come out and play the game that I love,” said Williams, who added that he couldn’t remember whether UNC recruited him out of high school.

Regardless, there were times on Monday when Williams might have been the best player on the floor.

Like when he surprised UNC’s Justin Pierce with a block on what should have been an easy dunk. Or when he drained a 3-pointer late in the second half that completed the Seminoles’ rally from an eight-point deficit and sent them into the break with a lead. Or when he outmuscled UNC’s post players for a late defensive rebound that put a stop to the Tar Heels’ comeback bid.

He hadn’t previously made a 3-point shot since December 28.

“He’s a superior athlete,” Hamilton said. “He has the ability to go get rebounds in crowds. He has such fast-twitch muscles that he can spring up in an instant and get a nice, uncontested shot.

“And even though he only was credited with one block, I thought he made a big difference in getting his hand up and changing shots.”

Indeed, Williams helped lead one of FSU’s most inspired defensive efforts of the season.

Matched up with a fledgling college hoops heavyweight desperate for a momentum-changing victory, the Seminoles frustrated the Tar Heels (10-12, 3-8) and star freshman Cole Anthony (16 points on 5-of-22 shooting) for most of the evening.

“They do a great job defensively,” UNC’s Williams said. “We ended up standing more than we did anything else. We couldn’t get better spacing to drive the ball to the basket either. We didn’t make shots. Didn’t make free throws.”

During a long period of the second half, the Seminoles didn’t allow the Tar Heels to make anything at all.

When UNC’s Garrison Brooks made a jumper at the 16:22 mark of the second frame, it pushed the Tar Heels to a 37-33 advantage.

They wouldn’t make another shot from the field for the next 10 minutes and 59 seconds – a dry spell during which they missed 17 consecutive shots.

That more than allowed the Seminoles to rally from their modest deficit, and they took the lead for good when guard Raiquan Evans scored back-to-back buckets midway with about 12 minutes to play.

“Their defense,” UNC’s Williams said, “was stronger than our offense.”

Hamilton, though, joked that UNC’s shooting woes didn’t seem so significant, and the scoreboard down the stretch showed why.

Despite their defensive dominance, the Seminoles rarely led by more than two possessions. And they gave the home crowd a scare when they turned the ball over an inbounds play with less than a minute to play and only a four-point lead.

But then it was only appropriate that, despite the miscue, FSU’s defense rose to the occasion. The Seminoles denied Anthony in the paint, and his friend – the talented Florida State freshman showing out against his home-state team – came down with the rebounds.

Williams made a pair of free throws at the other end of the floor and, a few moments later, the Seminoles were celebrating their 12th victory in 13 games.

They’ll get a chance to extend their historic run on Saturday, when they host a rematch with Miami (noon, ACC Network).

“We’re still a work in progress,” Hamilton said, “And that’s probably the most positive thing that I take away from where we are, (which) is that we’re still working and still developing.

“And while we’re doing that, we’re finding ways to (win) another ‘ACC blowout’ – five or six points.”