Walk-off Wins On Opening Day Over UNC And No. 1 Alabama 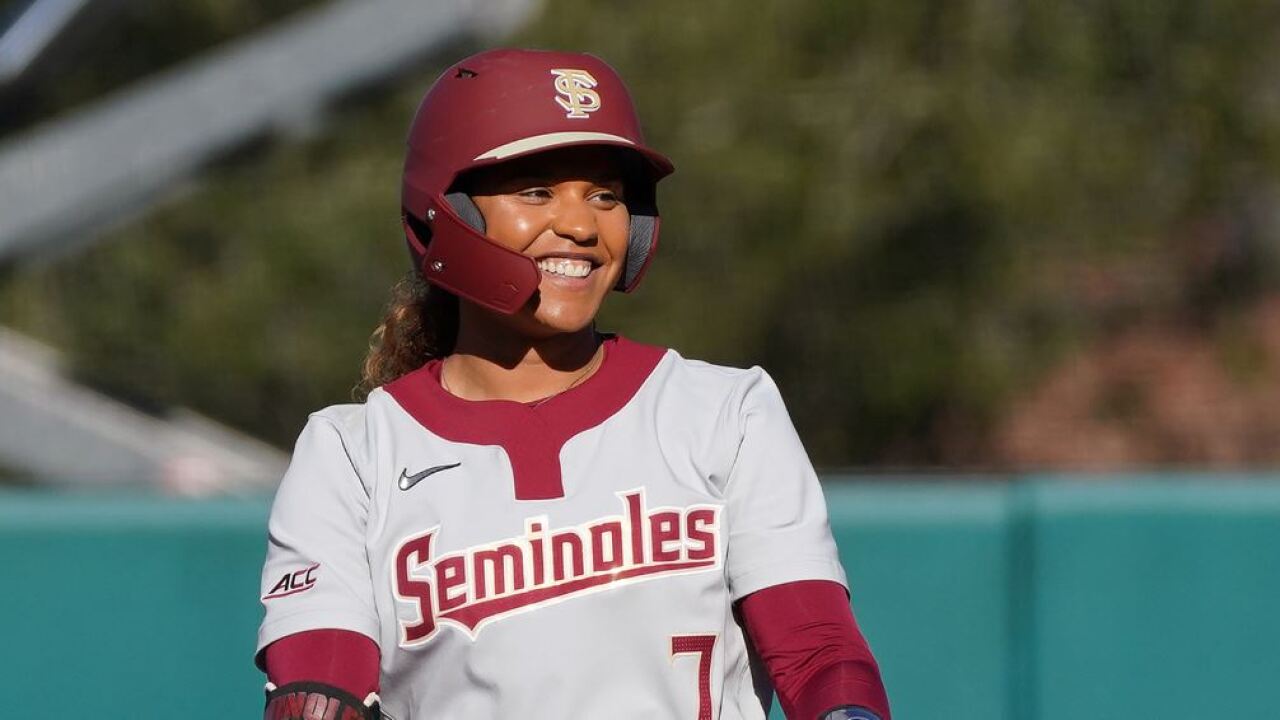 TALLAHASSEE, Fla. — Two games, two exciting finishes on Opening Day for the Seminoles as No. 8 Florida State (2-0) opened the 2020 JoAnne Graf Classic with a pair of wins over RV North Carolina (0-2) and No. 1 Alabama (1-1) on Friday afternoon.

Freshman Kiersten Landers placed an RBI bunt single in the bottom of the eighth to carry the Noles over the Tar Heels, 2-1, in game number one, while a grand slam from Dani Morgan capped a five-run comeback in the bottom of the seventh against the Crimson Tide, allowing Elizabeth Mason to drive home Landers for the winning run in the eighth for the 8-7 victory.

Landers finished the day 6-for-9 from the plate with a double, three RBI and three runs scored as the redshirt freshman made her collegiate debut on Friday. Senior Cassidy Davis earned the win in relief in both games as she combined for 3.0 innings without allowing a hit and posting five total strikeouts.

“It was definitely exciting,” said FSU head coach Lonni Alameda. “And I think that’s what we are all about, building our journey and seeing what we are as a team. A lot of people came up in a lot of different positions and Cassidy Davis was huge coming in to close out the games. It is just day one/game two, but what a way to start off. It is a long journey ahead for us. The grit that the team had tonight is a maturity piece, and we are a very young team, so if they already have that, then this season could be really exciting for us.”

Game 1: No. 8 Florida State 2, RV North Carolina 1 (8 innings)
Landers got things started as she lined a double into the left field corner to begin the top of the first, and later came in to score on an RBI single by Mason as the Seminoles took a 1-0 lead.

Landers also showed off her short game in the third inning, dropping a perfect bunt in front of the plate for a single.

Caylan Arnold also shined early in her FSU debut, as the senior transfer struck out the first four batters she faced and retired nine Tar Heels in a row to start the game, before Destiny Middleton reached on an error to begin the top of the fourth inning. A wild pitch moved the UNC runner to third and an RBI single by Kristina Burkhardt tied the game at 1-1.

Both offenses struggled in the middle innings as the teams combined for just two baserunners from the next 22 batters spanning from the fourth until the top of the seventh.

Florida State got the winning run on base to begin the bottom of the seventh as Sydney Sherrill worked back from a 1-2 count to draw a leadoff walk, but a groundout and a pair of strikeouts sent the season opener to extra innings.

UNC’s Abby Settlemyre led off the top of the eighth inning with a single through the right side and moved up to second base with one out on a stolen base. Davis entered the circle to relieve Arnold and retired the next two batters to end the threat.

Sophomore Josie Muffley started the FSU half of the eighth inning with a ground ball to third base that was thrown wide of the bag at first, allowing Muffley to advance to second. A groundout moved Muffley to third with two outs and Landers drove in the winning run with a bunt single in front of the plate.

Arnold allowed just four hits over 7.1 innings with one unearned run, zero walks and seven strikeouts in the no decision. Davis (1-0) picked up the win in relief, retiring both batters she faced, including a strikeout.

Game 2: No. 8 Florida State 8, No. 1 Alabama 7
Alabama took advantage of multiple FSU miscues to stake a 3-0 lead after the top of the first. Skylar Wallace was hit by the first pitch of the game from FSU’s Kathryn Sandercock, and Alexis Mack followed with an infield single. A groundout moved the runners to second and third and a wild pitch allowed the first run to score. After a strikeout, the inning continued on an FSU throwing error and KB Sides drove in another Alabama run with an RBI single to make it 3-0 Tide.

Alabama added two more in the top of the third inning on a two-run home run by Taylor Clark to push out to a 5-0 lead.

Alabama starting pitcher Montana Fouts began by retiring six of the first seven batters she faced, before Chloe Culp started the bottom of the third by reaching on a Crimson Tide throwing error. Culp moved to third base on a groundout and scored on an infield RBI single by Landers to cut the lead to 5-1.

Freshman Brianna Enter came in to pitch to begin the top of the fourth inning for Florida State, ending Sandercock’s day in the circle. A leadoff walk moved to third on a pair of groundouts and scored on an RBI infield single by Alexis Mack. Alabama added another run in the top of the fifth after Savannah Woodward lined an RBI double to left center to make it 7-1.

The Seminoles managed just one baserunner over a span of 3.2 innings as Fouts, a NFCA Second Team All-American in 2019 as a freshman, stymied the Florida State offense.

The Noles broke through with another run in the bottom of the sixth as Mason drew a walk and came in to score on an RBI double by Davis, cutting the lead to 7-2.

Fouts initally left the game after 6.0 innings pitched, allowing just two runs, one earned, on two hits with three walks and seven strikeouts, as Krystal Goodman entered to pitch the seventh for the Crimson Tide.

Freshman Devyn Flaherty led off the frame with a single up the middle and an Alabama error off the bat of Muffley, along with a walk to Morgan Noah, loaded the bases with nobody out. Landers drove in a run on an infield RBI single, prompting Alabama to bring Fouts back into the game. Morgan fouled off four pitches and crushed a grand slam to left to tie the game at 7-7.

The inning continued on a walk by Mason with one out, and after she stole second, Davis was intentionally walked. Kaia LoPreste grounded out, moving the runners to second and third with two away. An intentional walk to Flaherty reloaded the bases and Muffley nearly beat out a ground ball to short, but was retired to end the inning and send the game to extras.

An FSU error and a sacrifice bunt gave Alabama a runner on second with one away in the top of the eighth, but a nice play by Sherrill on a ground ball at third and a strikeout from Davis ended the inning.

Noah opened the bottom of the eighth with a single to left, ending Fouts’ day in the circle. Lexi Kilfoyl, winning pitcher in Alabama’s game against UNC earlier in the day, entered and Landers put down a bunt single in front of the plate. Morgan hit a sharp ground ball to third, which turned into a double play, leaving Landers at second. After Sherrill was intentionally walked, Mason lined a single through the right side, scoring Landers from second to secure the 8-7 victory.

The Seminoles recorded three double plays against Alabama on Friday night, doubling off runners at second on line drives to Landers and Morgan, along with a strikeout/caught stealing in the sixth inning involving Davis and LoPreste.

Sandercock gave up five runs, three earned, on four hits with one walk and one strikeout over 3.0 innings and did not factor in the decision. Enter tossed 2.2 innings of relief, surrendering two runs on three hits with three walks and a strikeout. Davis closed out the game, tossing 2.1 innings without allowing a hit, issuing just one walk and posting four strikeouts in the relief win.

The Seminoles are back in action on Saturday, February 8 as the JoAnne Graf Classic continues. FSU will take on Detroit Mercy (0-0) at 12:30 p.m., and face No. 1 Alabama at 3:00 p.m. Both games will be broadcast on ACC Network Extra and links for the broadcast, tickets and live stats will be available on the softball schedule page of Seminoles.com.