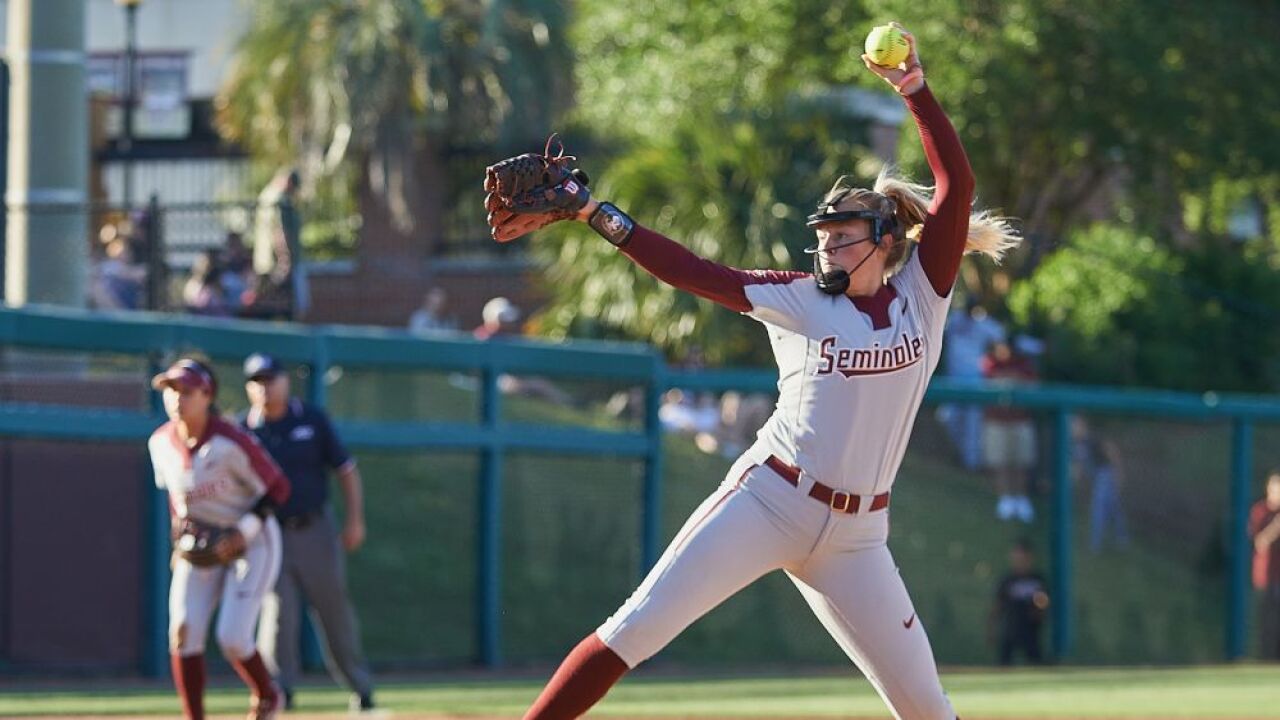 King (25-5) retired the first 14 batters she faced and tossed 5.1 innings with four strikeouts before allowing a single in the bottom of the sixth inning.

“Great start to the weekend series and Meghan King pitched another gem for us,” said FSU head coach Lonni Alameda. “We had some good defense and came out swinging the bat and made some good adjustments throughout the game. Excited to take the momentum into game two tomorrow.”

Florida State jumped out to a 1-0 lead in the top of the first inning as Cali Harrod opened the inning with a leadoff walk. It marked the 35th time this season that the junior shortstop has reached base to start the first. Harrod quickly stole second base and scored on an RBI single by Carsyn Gordon.

Anna Shelnutt drove in a run with an RBI double in the top of the second, scoring Cassidy Davis, who led off the inning with a single to right.

Dani Morgan made it 4-0 Seminoles in the top of the third inning as she hit her 12th HR of the season to right field, scoring Sydney Sherrill who reached on a fielder’s choice.

The Seminoles scored three runs in the top of the fourth inning to post a 7-0 lead. Savannah Parker opened the inning with a leadoff walk and Leslie Farris re-entered to run at first base. Farris stole second and a double to left by Harrod put runners on second and third with nobody out.

Gordon followed with a ground ball to third base and Farris got in a rundown at the plate and on the fifth exchange, Farris was hit in the back by the throw and she scored as the ball rolled to the fence behind home plate.

Harrod also aggressively scored on the play, recording the 200th run scored of her career, moving into fourth place in FSU career history. Sherrill followed with an RBI single up the middle to close out the scoring in the inning.

Shelnutt hit a one-out single to left in the FSU fifth inning and was pinch-run for by Deja Bush. Bush stole second, but was left stranded to end the inning.

Sherrill lined a single to center in the top of the sixth inning and was replaced on base by Elizabeth Mason with a fielder’s choice. Morgan followed with a two-out infield single and Mason dashed all the way to third on the play. Davis drove in Mason with a single to make it an 8-0 game.

After the sixth-inning single, King was replaced by Kathryn Sandercock and she allowed a single over the final 0.2 innings of the game.

The Seminoles and Orange will continue the series on Saturday, May 4 with a game at 1:00 p.m., which will air on ACC Network Extra. Links for the broadcast and live stats will be available on the softball schedule page of Seminoles.com.

Fans can listen to the FSU softball coaching staff, head coach Lonni Alameda and assistant coaches Travis Wilson and Craig Snider, on their weekly podcast: Coaches and Coffee – The FSU Softball Podcast. Each week, the coaches talk about the current state of the Seminole softball team, chat about NCAA softball from around the country, and have a lot of fun along the way. The podcast can be found on iTunes, Spotify, Google Play, or directly at our website – fsusoftballpodcast.wordpress.com.

Throughout 2018-19, the Seminoles will be celebrating the 50th anniversary of women’s intercollegiate athletics at Florida State and there are many events and reunions planned for all women’s sports. Head to www.seminoles.com/50th/ for more information that will be updated throughout the year.