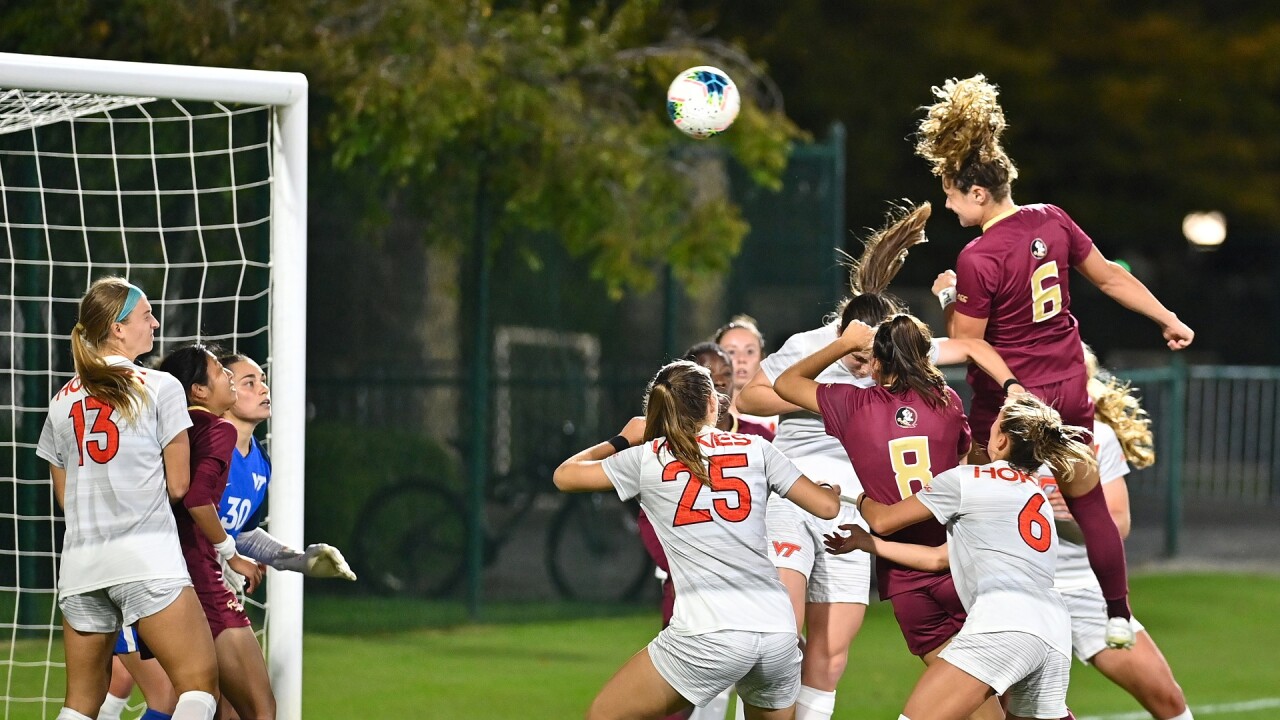 BLACKSBURG, Va. – The second-ranked Florida State soccer team (3-0) has still not lost to Virginia Tech (0-5) as they dominated the Hokies 4-0 on the road Thursday night.

The 4-0 win over VT marks the largest margin of victory over the Hokies in the 21 game series between these two schools. Florida State had never scored more than three goals against Virginia Tech until tonight and this marks the 14th shutout of VT.

It took a while for anything to happen in Blacksburg, Va. as the first Seminole shot was not recorded until the 36th minute by junior Jaelin Howell.

Earlier in the match, the Seminoles did have multiple opportunities coming off set pieces from sophomore LeiLanni Nesbeth. She took her first corner of the game in the 14th minute that would end up going off of the crossbar.

Florida State got off their second shot of the game in the 42nd minute on a shot from redshirt junior Emily Madril, but that would be saved by the VT keeper.

It wasn’t until the 44th minute that either team would get on the scoreboard and it wasn’t even from a recorded shot. Florida State would get the ball to Jenna Nighswonger on the right side of the box and she would cross it to the freshman Jody Brown in front of the goal. Brown would not have to do anything as it would hit off of a Virginia Tech defender into the back of the net for a VT own goal and a 1-0 FSU lead.

Florida State was more aggressive on offense in the second half, recording 15 shots and that would show on the scoreboard as they resulted in three Florida State goals.

It took until the ninth shot of the second half to convert for the Seminoles, as Jaelin Howell would record her first goal of the season and seventh of her career. The goal would come off of a header on a Nighswonger corner kick.

The Seminoles would strike again in the 76th minute off of another corner. Yujie Zhao would send one into the box that would be headed by Lauren Flynn and then chested into the back of the net by freshman Ran Iwai for the first goal of her career and a 3-0 lead for the Seminoles.

Florida State would complete their third shutout of the season, with their fourth goal of the game, this one coming from Brown on the second goal of her career. Nighswonger would take a shot from 25 yards out that would be deflected right to Brown with no one between her and the goalkeeper and Brown would convert, sealing the Seminole victory.

With 10 goals in the first three ACC games, Florida State broke their previous record of nine goals scored in the team’s first three conference games. Those 10 goals have been scored by seven different players, with both Brown and Zhao scoring two goals each.

Six of FSU’s 10 goals have been scored from players coming off of the bench.

Florida State caps off their road weekend on Sunday at 1 pm in Winston-Salem, N.C. against Wake Forest (1-2-1). The game is broadcasted on the ACC Network X.