Noles Focus On Future – And Leave Past Behind – At ACC Kickoff 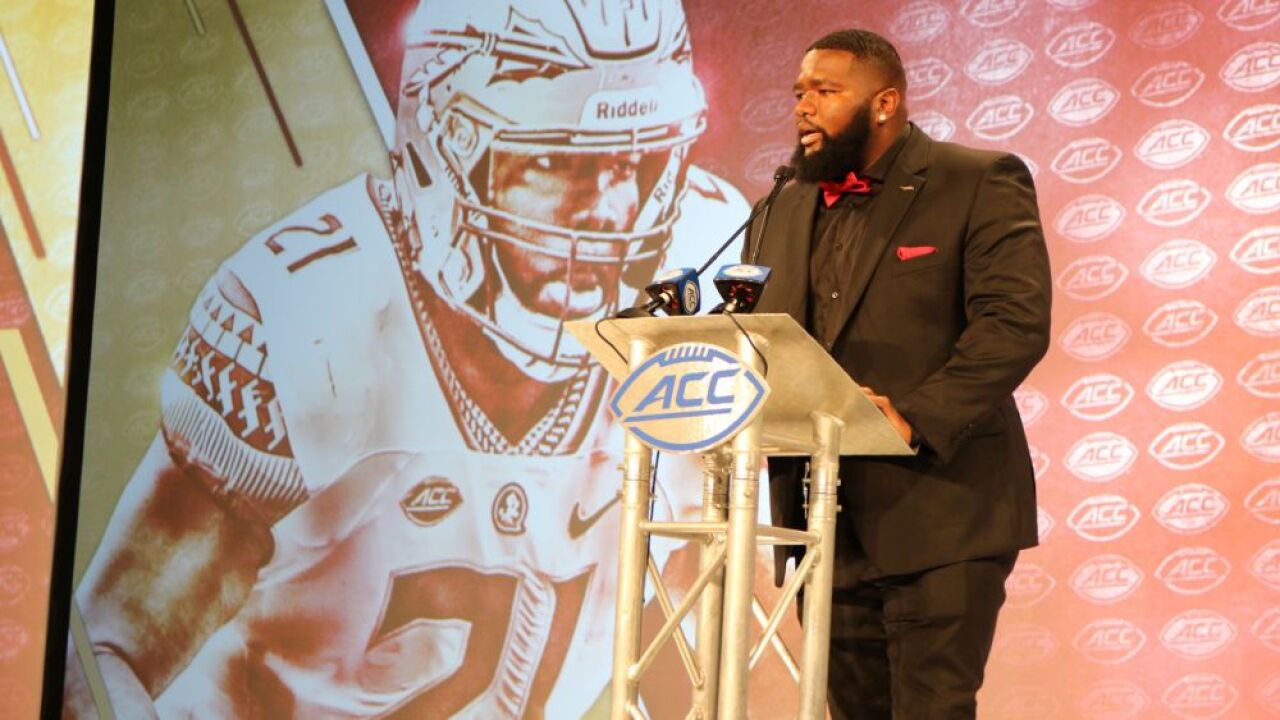 CHARLOTTE, N.C. – There’s not much sign of the 2018 football season inside Florida State’s Moore Athletics Center. No photos or videos from painful losses, nothing that might be designed to stoke a fire in the Seminoles’ bellies every time they step into the weight room or on to the practice fields.

Other schools might use previous disappointments to fuel future success, but coach Willie Taggart and the Seminoles have their eyes trained solely on one direction: Forward.

“The only time we talk about it,” Taggart said, “is when we’re asked about it.”

In that case, the Seminoles talked about it plenty on Wednesday afternoon.

But that doesn’t mean they had much to say.

“Last year, we moved on,” Wilson said. “We moved forward. Nobody feels sorry for themselves. You have to be a man about it, flip the page and keep going.”

And, most succinctly, from Terry:

“I don’t remember anything about last year.”

Florida State’s contingent in Charlotte was quite obviously united in its approach to “last year” discussion, and it’s a good bet that their philosophy extends to the coaches and teammates back home in Tallahassee.

But all that talk – or lack thereof – might have rung a little hollow had Taggart, Wilson and Terry not also expressed their belief in and vision for a brighter future.

Make no mistake, the Seminoles expect big things from their 2019 campaign, which begins in earnest with the start of fall camp in a few weeks.

“The mindset,” Wilson said, “is we’re going to come in and win each day – (at) anything. Like, we’ll be walking to the door and say, ‘I’m going to beat you to the door.’”

More practically, Taggart is encouraged by the strides he’s seen from Year 1 to Year 2, particularly on offense.

Yes, the Seminoles have a new offensive coordinator, new offensive line coach and new receivers coach. But the foundation of their offense – their commitment to a fast tempo – is the same.

The same players who were essentially learning an entirely new language (to say nothing of the physical demands) a little more than 12 months ago are starting to become fluent.

“You go through Year 1, (it’s) a learning experience throughout the whole thing,” Taggart said. “Now, going into Year 2, you’re familiar with everything.

Wilson, a junior set to enter his third year at FSU, says he’s seen a greater focus and attention to detail than in years past.
Photo: Sue Wallrich/FSU Athletics'I don't remember anything about last year.' - Tamorrion TerryThat means more time in the film room, more time spent in the playbook and more time on the practice fields, where Wilson and his defensive teammates have taken it upon themselves to simulate and react to in-game scenarios.

A mindset that’s looking forward. And, Wilson, admitted, up. At least for now.

The Seminoles were first on the day’s schedule, meaning they held their press conference and breakout sessions before any of the league’s teams.

Otherwise, though, it was hard to ignore the big orange elephant in the room.

The Clemson Tigers have won two of the last three national titles, have won four straight ACC crowns and will no doubt be the media’s runaway pick to win the league again this year.

At least once, they hit both in one question.

Asked the biggest thing the Seminoles learned from their loss to Clemson last year, Wilson answered: “What not to do.”

It was a painful lesson, but one that will be worth the price paid if it leads the Seminoles back to national prominence.

And Wilson made clear on Wednesday that that’s exactly where he and his teammates are headed.

And, as far as Wilson is concerned, you can’t pay too much attention to outside influences, either.

It’s no secret that a subpar season can come with a swell of criticism – some of it constructive but much of it not.

That’s particularly true at a place that hadn’t finished with a losing record in 40 years.

Wilson and his teammates aren’t blatantly defiant, nor are they willfully ignorant. They know that last year’s Seminoles fell short of their own standards, and that the quickest, most effective way to change the perception is also the most obvious.

Do that, and the Seminoles might not be asked about last year ever again.