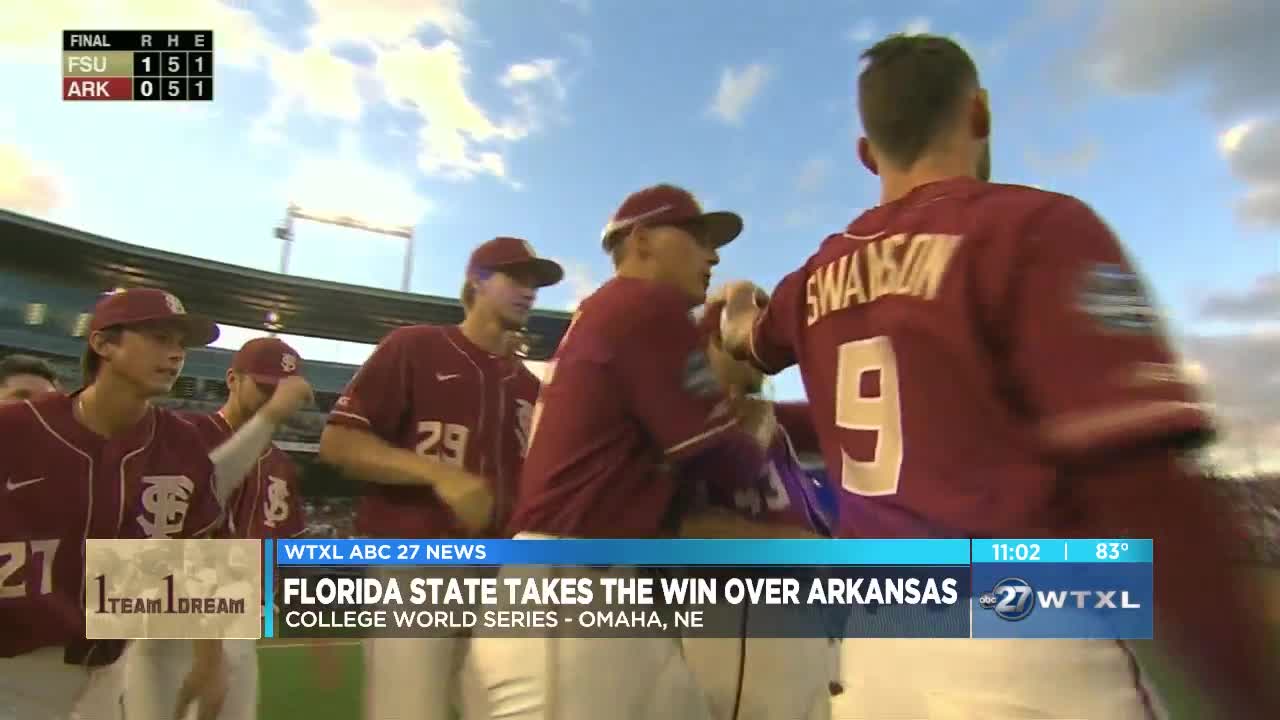 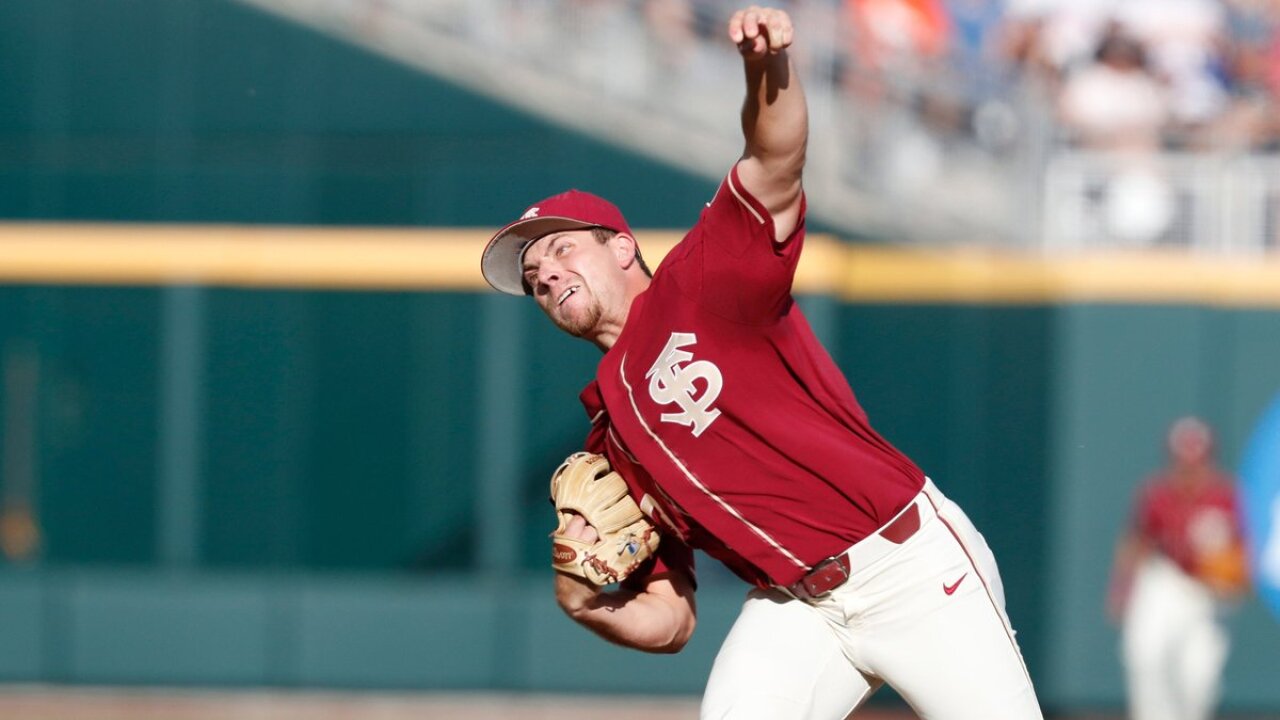 OMAHA (WTXL) — Having just watched Arkansas’ No. 9 hitter lead off with a double in the bottom of the eighth inning, and knowing that the top of the Razorbacks’ heavy-hitting lineup was headed to the plate in a scoreless game, Drew Parrish had one thought cross his mind.

The situation was tough, but Parrish was tougher.

With Florida State and Arkansas locked into a pitchers’ duel and a potentially crucial win in each team’s first game at the 2019 College World Series hanging in the balance, Parrish took a breath, settled in and then set down the Razorbacks’ top three hitters in order.

A few moments later, the Seminoles’ offense did its part to score the only run in a 1-0 victory over the Razorbacks here at TD Ameritrade Park in Omaha.

Florida State, a winner in its CWS opener for the first time since 1999, will meet Michigan in a winners’ bracket game on Monday at 7 p.m.

“That kid is unbelievable.”

Arkansas sure believes it.

Because despite boasting an offense that ranks near the top of the country in slugging percentage, home runs, runs scored and team batting average, the Razorbacks against Parrish managed only five hits – four of them singles.

Parrish struck out nine, issued two walks and helped the Seminoles become just the second team to shut out Arkansas this season.

“He threw a lot of strikes tonight, and he was ahead in the count a lot,” Arkansas coach Dave Van Horn said. “Just really did a good job of mixing, keeping our guys off-balance.”

Indeed, with a fastball in the low-90s and a changeup in the low-70s, the left-handed Parrish kept Arkansas’ lefty-heavy lineup guessing all night.

Of his nine strikeouts, eight swung through strike three. And, more often than not, it seemed that Arkansas’ hitters were swinging through an off-speed pitch out of the zone.

“When you can take a baseball … and throw one pitch at 91 and the next one at 71, it literally is astounding,” FSU coach Mike Martin said. “That changeup will take him a long way.”

“I think it was the best I’ve ever seen it,” De Sedas said. “His changeup was out of this world – it was Major-League good.”

Perhaps it’s appropriate, then, that in doing what he did, Parrish put himself in the company of some Major Leaguers – he’s the first FSU starter to win a CWS opener since Jonathan Johnson in 1995, and his nine strikeouts were the most for an FSU pitcher in Omaha since Tim Davis had nine in 1992.

“(Parrish’s) changeup is real,” FSU assistant Mike Martin Jr., said. “That’s why I truly believe he’ll pitch in the big leagues. … And a left-handed changeup, they (Arkansas) probably haven’t seen one that good.”

And, in an honest moment, the Razorbacks might admit that they weren’t expecting to see one that good.

Because after entering the season with All-America expectations, Parrish has ridden the ups and downs of a season that, in some ways, mirrors that of his team.

Sometimes, like in an eight-inning shutout against Clemson earlier this season, Parrish has been brilliant.

Other times, though, the pitches that were so effective on Saturday night seemed to elude him.

In FSU’s postseason opener against Florida Atlantic, Parrish surrendered eight hits and five runs before leaving after the fifth inning. A week later, at LSU, Parrish made it 4 2/3 innings and left with a four-run deficit.

In his previous four starts leading up to the College World Series, Parrish had a 9.92 ERA with 18 earned runs and 31 hits in 16 1/3 innings.

But none of that mattered on Saturday night.

“You have it some days, and (some days) you don’t,” FSU catcher Matheu Nelson said. “And today he had all of it. He had his whole entire arsenal.”

And he used it all in that fateful eighth inning.

After Arkansas’ Christian Franklin hit his double, and after Trevor Ezell bounced a grounder that moved him to third, Martin came out to the mound for a visit.

He told Parrish to trust his catcher and his defense, and to not be afraid of throwing his breaking pitches in the dirt. But Florida State’s empty bullpen likely told Parrish more than Martin’s words ever could: Whatever was about to happen, the Seminoles were riding with their starting pitcher.

“He came out there and said we have the right guy on the mound for this situation,” Parrish said. “So that proved to me that I was staying in. And I had to kind of step up and get my team out of the situation.”

He did, and against two of the nation’s top hitters.

Parrish needed five pitches to handle Arkansas’ Casey Martin – a second-team All-SEC selection with 15 home runs and 56 RBIs – and set Martin down with a 78-mile-per-hour changeup that dropped out of the strike zone as Martin swung through.

A moment later, against Matt Goodheart (.348, 46 RBIs), Parrish threw 81 miles per hour for strike one, 93 for strike two (on his 110th pitch of the game, no less), then bounced one in the dirt before going back to an 81-mile-an-hour breaking ball for strike three.

“I mean, Arkansas is a powerhouse,” Nelson said. “They were just mowing down teams throughout this year. For Parrish to be able to do that, it was just unbelievable.”

“Oh my gosh,” FSU third baseman Drew Mendoza added. “I could’ve put my glove in my back pocket.

Florida State shuts out Arkansas to win their first opening game in Omaha since 1999.

Florida State (42-21) defeated No. 5 National Seed Arkansas 1-0 in a dominant pitching performance by the Seminoles, mostly by Drew Parrish, which keeps FSU in the winners bracket.

FLOWERS GETS A STRIKEOUT TO END IT. Seminoles beat Arkansas 1-0 and are staying in the winners bracket. #FSUonWTXL @abc27

WE ARE ON THE BOARD!!!! Nander flies out to right, JC tags, and Florida State takes the 1-0 lead over Arkansas!!! #FSUonWTXL @abc27

Ouch. Arkansas shortstop made good play on that ball but Flowers took out his arm sliding into second. He’s safe. So is Smith at first. Seminoles have two on, no outs. #FSUonWTXL @abc27

YESSIR. Parrish with another huge strikeout after giving up that leadoff double. Let’s head to the ninth. Still scoreless! #FSUonWTXL @abc27

Groundout to SS. Runner advances to third. One down. #FSUonWTXL @abc27

Leadoff double for the Hogs to start the 8th.

Martin lines out to left. T8 in the books... still scoreless. #fsuonwtxl @abc27

Mendoza goes to the warning track, but it isn’t enough. Two outs for Florida State in the T8. Still scoreless. #FSUonWTXL @abc27

Drew can play defense too. Groundout back to the pitcher ends the Arkansas threat and we are still scoreless. #FSUonWTXL @abc27

Single to left puts runners on the corners for the Hogs. Two outs.

Nelson hits it long, but right to the Arkansas RF. Still scoreless after T6. #FSUonWTXL @abc27

Martin strikes out. One down.

Parrish = pick off. Ends the B5. Still scoreless as we head to the sixth inning. #FSUonWTXL @abc27

Drew Mendoza goes down swinging to end T5. One left on.

Three up, three down. We are headed to the 5th inning, still scoreless here in Omaha. #FSUonWTXL @abc27

Double play ends the threat. Big get there for the Noles to get out of the B3 unscathed. Headed to the fourth.

Groundout to Parrish. One out, but Hogs have runners on second and third.

Back to back Arkansas singles lead off B3. No outs, runners on 2nd and 3rd. #FSUonWTXL @abc27

Headed to the B3. Still scoreless here in Omaha between Florida State and Arkansas. @abc27 #FSUonWTXL