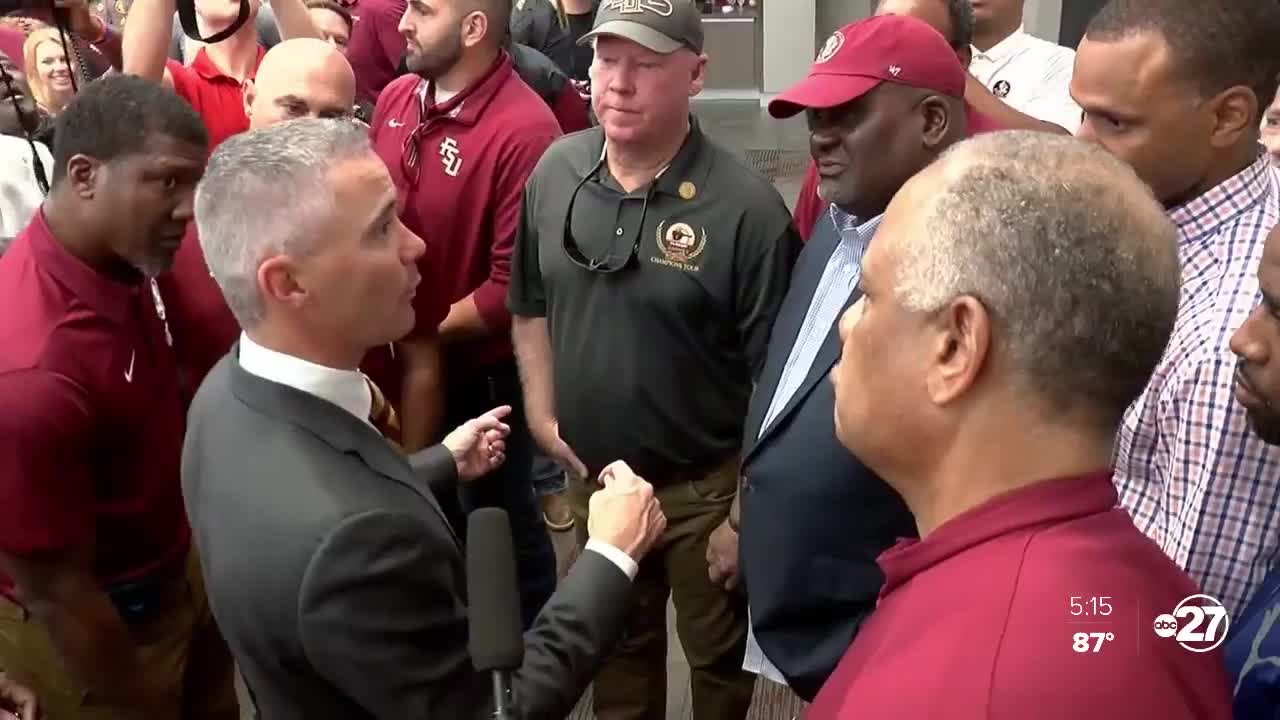 Florida State head coach Mike Norvell is taking responsibility after comments he made to The Athletic begin circulating on social media.

Reed reported that Norvell said "We've had a lot of open communication with our team, our players and our coaches. I went back and forth individually with every player this weekend."

Wilson disputed the claim, saying through a tweet that the team instead "got a generated text that was sent out to everybody. There was no one on one talk between us and coach." He then went on to say that "me and my teammates as a whole are outraged and we will not be working out until further notice."

Man this 💩 did not happen mane. We got a generated text that was sent to everybody. There was no one on one talk between us and coach. This is a lie and me and my teammates as a whole are outraged and we will not be working out until further notice 💯 #hunchoout https://t.co/6Uuy6K7Eu3

WTXL learned that there was a meeting that took place between Norvell and the players Thursday morning. After that meeting, Norvell made an official statement addressing the comments in question.

I’m proud of Marvin for utilizing his platform to express his reaction to my comments in an earlier interview. Last Saturday evening, I sent a text to each player individually to present an opportunity for open communication with me.

Many members of our team chose to respond and have more in-depth conversations about issues and feelings.

Marvin is right. It was a mistake to use the word “every”. Particularly at this time, words are important, and I’m sorry.

Once again, I am grateful for the opportunity that I was given to speak to our team more in-depth as a result of Marvin being willing to express his feelings. We will continue to communicate and work together to be part of the solution making our world a better place for ALL.

Players also showed support for their coach after the meeting concluded. Linebacker Kevin Glenn tweeted: "We love our coach and we are together as a team. FSU football team and coaching staff is fine and working. See y’all in fall."

Chiles graduate Amari Gainer posted a video with the caption "All I know… #work". It showed him and two other players in workout attire. It is unclear when the video was taken.

You can read what Coach Norvell sent to all players on Saturday below:

"Good evening (name) I wanted to shoot you a short message sorry I can’t send video cause I’m driving. I wanted to let you know that Maria and I are praying for every coach & player as well as for our country. For all those that have been victims of hateful actions, discrimination, prejudice and disrespect we lift them up in our thoughts and seek justice. We live in an unfair and volatile world but I want you to know that you are loved & counted on to make a difference for our country’s future. I know there is anger and strong feelings that come with each day and every experience but please know better days are ahead because of YOU. Be safe and please always know we are here for you as coaches and staff if you ever need to talk. You have a tremendous platform as member of our Nole Family. Let’s be different and let our actions be heard in Service, Sacrifice, and Respect. Thank you for opportunity to coach you and stand by your side can’t wait to see you tomorrow night in zoom meeting!"