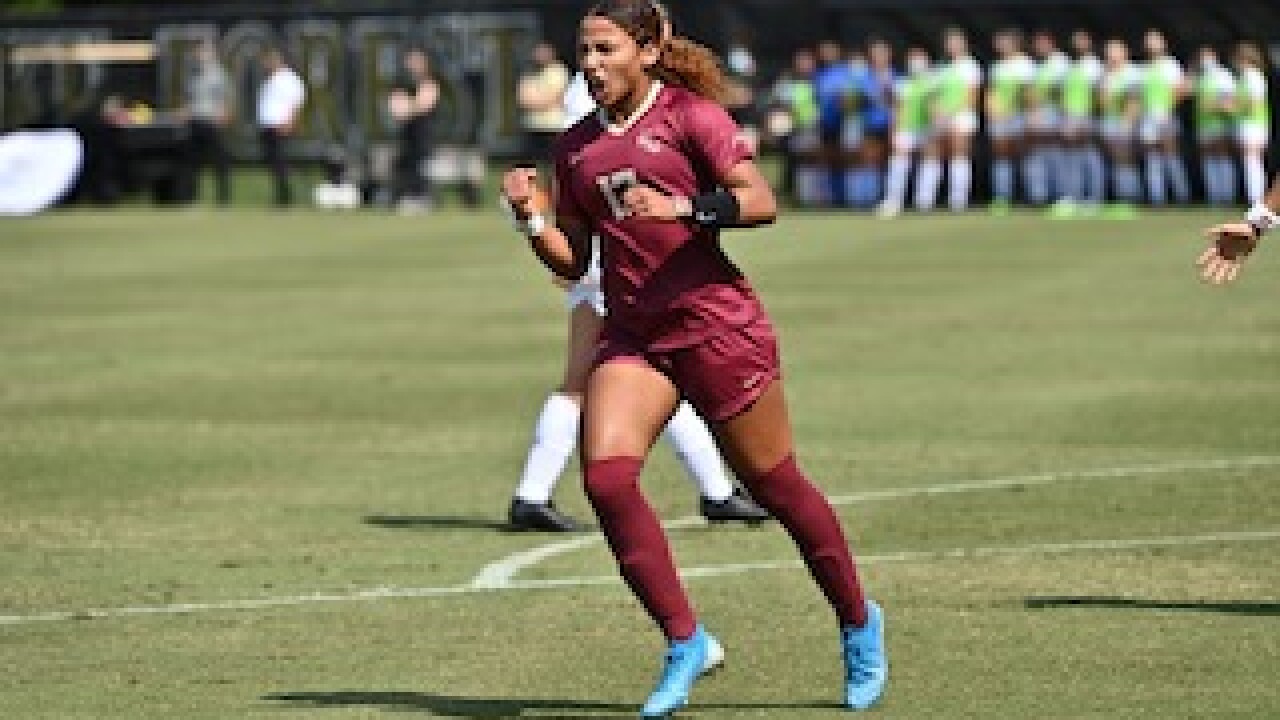 WINSTON-SALEM, N.C. – The second-ranked Florida State soccer team (4-0) has still not let up a goal through their first four games as they shut out Wake Forest (1-3-1) 4-0 in Winston-Salem.

The win gave the Seminoles their first-ever lead in the all-time series, as they now lead the Demon Deacons 13-12-5.

Florida State came out of the gates attacking, getting their first shot off two and a half minutes into the game and then scored their first of three first half goals in the sixth minute. Sophomore LeiLanni Nesbeth scored her second goal of the season as she fired one across the Wake Forest keeper’s face and into the bottom left corner on an assist from redshirt senior Kristen McFarland.

The Seminoles continued to gets shots off early and often in the second half as they outshot the Demon Deacons 12-1 in the first half with eight of those 12 shots on goal.

It didn’t take long for the Seminoles to extend their lead to 2-0 as redshirt junior Emily Madril would score her second goal of the season on a penalty kick in the 12th minute. Redshirt senior Clara Robbins was fouled inside the box as Wake Forest’s Sophie Faircloth pushed her in the back as the Noles kicked in a high pass to Robbins.

Nine minutes later junior Kristina Lynch gave FSU a 3-0 first half lead on her first goal of the season on an assist from sophomore Jenna Nighswonger. Lynch would kick the ball along the ground just out of the goalkeeper’s outstretched arms and into the bottom right corner.

There was not a lot going on in the second half until the 85th minute when junior Yujie Zhao put the fourth goal on the board for the Seminoles. It was her team-leading third goal of the season and came off of Nighswonger’s team-leading third assist.

Florida State also had two good looks from freshman Jody Brown towards the end of the second half but Brown would not convert on either.

With Florida State’s goal in the sixth minute, Kristen McFarland moved into a tie for 25th all-time in points scored with 47. Her 47th point came on an assist to LeiLanni Nesbeth.

With 14 goals in the first four ACC games, Florida State broke their previous record of 12 goals scored in the team’s first four conference games. Those 14 goals have been scored by eight different players, with both Brown, Nesbeth and Madril all scoring two goals each and Zhao scoring three.

Seven of FSU’s 14 goals were scored from players coming off of the bench.

Florida State is off next week before heading back on the road to take on Pitt (October 15) and Virginia (October 18).