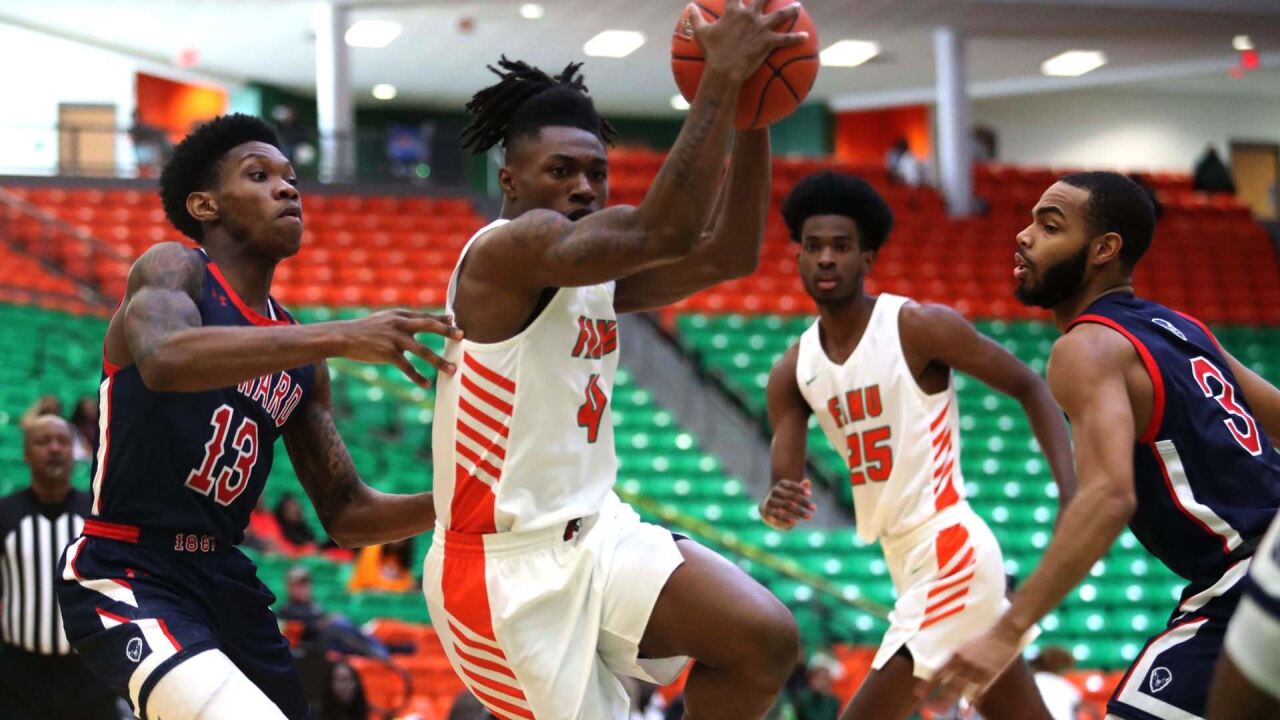 FAMU (12-14 overall, 10-5 MEAC), which completed its first undefeated season at home since 1988-89, led 28-22 at the half, but surrendered the lead early in the second half before grabbing the lead for good. South Carolina State nearly rallied from a nine-point deficit late, but key foul shots by Rod Melton, Jr., Nasir Core, Brendon Myles and Bryce Moragne sealed the victory for the Rattlers.

How it Happened
Florida A&M opened the game on a 14-4 run, capped by a layup by Brendon Miles with 12:29 remaining in the first half.

South Carolina State closed the gap to 20-16 after an Ian Kinard layup with 6:09 left, but Florida A&M used a small 7-0 run, capped by a Nasir Core pair of free throws with 1:58 remaining.

The Bulldogs (11-15, 6-8) continued to play from behind and cut the margin to 28-22 right before the half after two free throws by Damani Applewhite.

South Carolina State came out in the second half strong with buckets by Tariq Simmons and Ozante Fields, tying the game at 28, with just under 18 minutes to play and forcing FAMU head coach Robert McCullum to call a timeout.

The Bulldogs briefly grabbed a 30-28 advantage after an Applewhite layup with 17:25 left, but the Rattlers responded with six straight points by Bryce Moragne, including a thunderous two-handed fastbreak dunk, giving Florida A&M a 34-30 lead with exactly 16 minutes remaining.

The Rattlers stretched the lead to 46-38 after a Moragne putback with nine minutes left, but FAMU went through a cold spell from the floor as South Carolina cut the deficit to 46-41 on the strength of free throws with 5:14 remaining.

A Core jumper with just over four minutes left gave Florida A&M a 48-41 lead and a layup by MJ Randolph gave the Rattlers a 50-41 lead with 2:32 remaining.

South Carolina State got a three-point play and jumper by Applewhite to cut the deficit to 52-48 with 1:17 left and trimmed the margin to 55-52 after a layup by Rayshawn Neal with 54 seconds remaining.

The Bulldogs immediately fouled and sent Core to the charity stripe, where he went 1-of-2, to give FAMU the 56-52 lead with 49 seconds remaining.

South Carolina State got a layup by Tashombe Riley with 35 seconds left, but was forced to foul as Melton went to the line. The Dothan, Ala. native split the pair and, on the Bulldogs', next offensive possession, Neal was whistled for a charge, turning the ball back over to the Rattlers.

Brendon Myles was fouled with 17.9 seconds left and he sank a pair, giving FAMU the 59-54 lead and South Carolina State could not recover as the Rattlers earned their eighth straight home victory.

News and Notes
> Florida A&M snapped a six-game losing streak to South Carolina State
> FAMU went a perfect, 8-0, at home this season – the last time the Rattlers went undefeated at home was during the 1988-89 season
> The win also marked the first undefeated home season inside the Al Lawson Center for the Rattlers
> Florida A&M completed back-to-back MEAC winning seasons for the first time since the 2006-07 and 2007-08 seasons
> The Rattlers have won 13 out of their last 16 home games, including eight straight this season
> Since Dec. 21, 2019, Florida A&M has gone 12-5
> Florida A&M improved to 20-8 at home under head coach Robert McCullum
> The Rattlers honored its seniors prior to the start of Monday's game – Rod Melton, Jr., Brendon Myles, Nasir Core and Damaree Hunter
> Florida A&M has faced two nationally-ranked programs so far this season – #10 Seton Hall and No. 21 Tennessee
> FAMU picked up a signature victory on Dec. 31 against Iowa State (70-68)
> The Rattlers conclude their home campaign – eight games
> Florida A&M has travelled 28,824 miles and will conclude the season with 29,330 miles with the season-ending road trip to Bethune-Cookman

Up Next:
Florida A&M ends the season on Thursday, March 5 at Bethune-Cookman. Tip-off against the Wildcats is set for 7:30 p.m. from Moore Gymnasium.