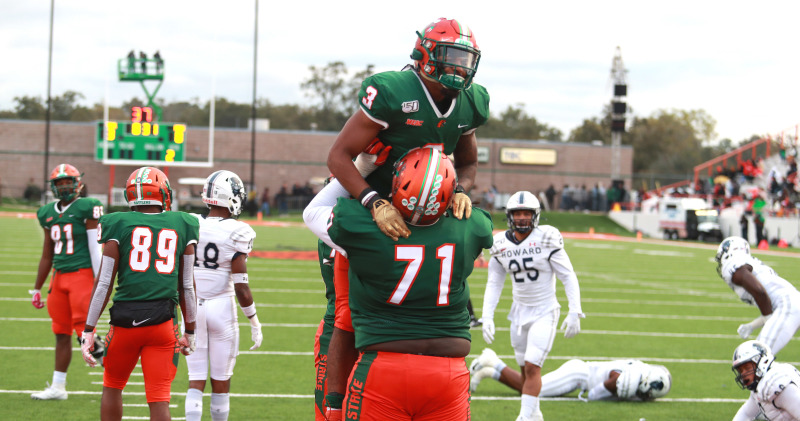 TALLAHASSEE, Fl. — The Florida A&M University football team, ranked No. 12 in the Football Championship Subdivision (FCS) started out of the gate slowly on Saturday against Howard, but pulled away with 22 straight third-quarter points to defeat the Bison, 39-7, in a Mid-Eastern Athletic Conference (MEAC) game at Bragg Memorial Stadium.

The Rattlers (9-1 overall, 7-0 MEAC) celebrated Senior Day on Saturday and concluded their home campaign with a perfect 6-0 mark, the first in the program in 10 years, when FAMU went 4-0.

Florida A&M got a 46-yard field goal by Yahia Aly with 10:44 remaining in the first quarter to grab an early 3-0 lead.

The Rattlers, who were off last week, shook off the rust midway through the second quarter when Azende Rey, running the Wildcat offense, scored on a 2-yard run, giving FAMU a 10-0 lead with 8:31 remaining in the first half.

On the very next offensive series, Howard quarterback Ramar Williams was picked off by Bell and two plays later, Ryan Stanley connected with Xavier Smith for an 18-yard touchdown strike as the Rattlers extended the lead to 17-0 with 7:52 left in the second.

Florida A&M took the opening kickoff of the second half and went 56 yards in five plays with Bishop Bonnett scoring on a 25-yard touchdown run, pushing the margin to 25-0 as Chris Faddoul converted the 2-point conversion with 12:40 left.

The Rattlers continued to move the ball on their next possession and went 80 yards in nine plays as Terrell Jennings scored on a 3-yard run, giving FAMU a 32-0 advantage with 6:42 remaining.

Florida A&M put the game away with 40 seconds left in the third when Rey caught a 22-yard pass from Rasean McKay, extending the lead to 39-0.

Turning Point
The Rattlers got off to a slow start, but that was expected off coming off a bye last week.

Florida A&M led 17-0 at the half, but broke the game open with 22 points in the third quarter.

The Rattlers got touchdowns by Bishop Bonnett, Terrell Jennings and Azende Rey and did not look back against the Bison.

Florida A&M concludes the season next Saturday in the 40th Annual Florida Blue Florida Classic against rival BCC. Kickoff against the Wildcats is set for 3:30 p.m. from Camping World Stadium in Orlando, Fla. and the game will be televised live on ESPN News.