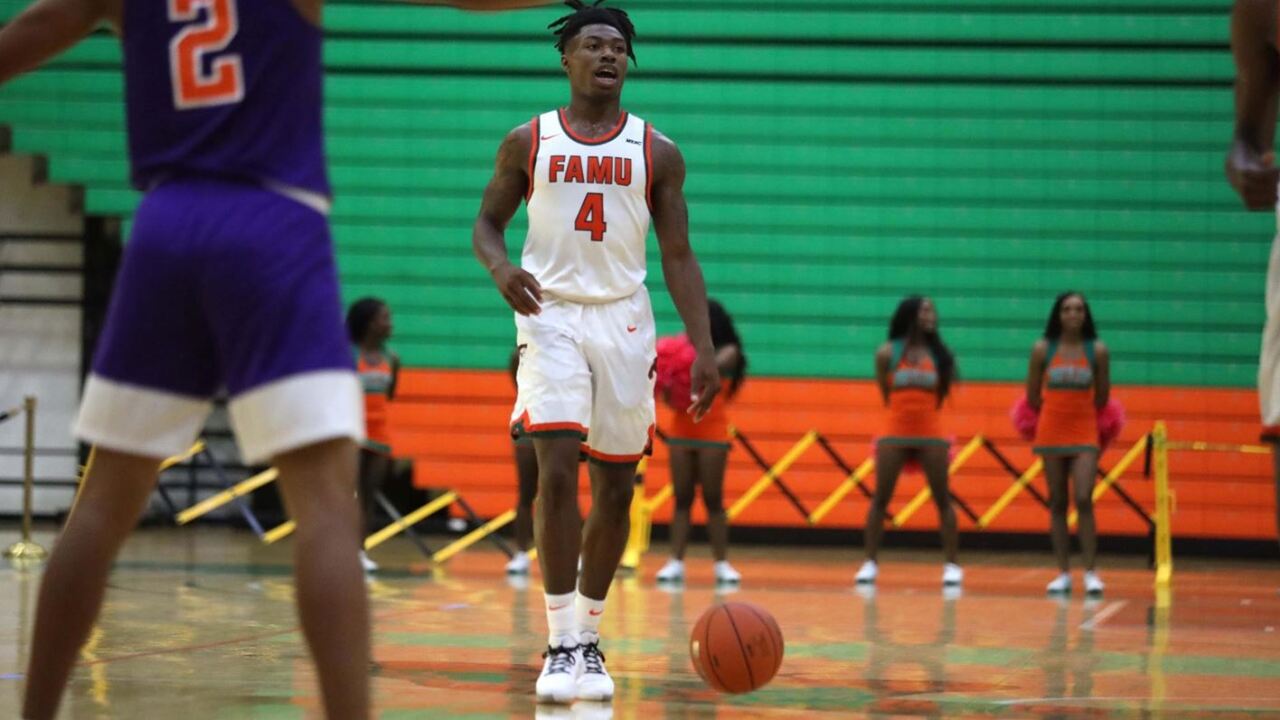 GREENSBORO, N.C. | Rod Melton, Jr. poured in a season-high 24 points as the Florida A&M University men's basketball team let the lead slip away in regulation before falling, 97-90, in overtime to North Carolina A&T State in a Mid-Eastern Athletic Conference (MEAC) game on Monday night at the Corbett Sports Center.

Florida A&M (2-11 overall, 0-2 MEAC) trailed 43-29 at the break, but outscored North Carolina A&T State, 52-38, in the second half. The Rattlers held their largest lead, 79-75, with two minutes remaining, but the Aggies rallied to force overtime. In the extra period, North Carolina A&T State, outscored FAMU, 16-9, to pick up the win and extend its win streak to two games.

Melton finished just three points shy of tying a career high as he registered 24 points, including draining five 3-pointers, along with three assists, three rebounds and a pair of steals. MJ Randolph posted a double-double of 16 points and 10 rebounds, to go along with a team-high four assists and three steals, while DJ Jones tallied a double-double of 15 points and a career-high 14 boards, with two steals, one block and one assist. Nasir Core finished with 13 points and Brendon Myles just missed his career high with 12 points.

How It Happened
North Carolina A&T State raced out to a 13-6 lead after a Tyler Maye bucket with 14:51 remaining in the opening half, but Florida A&M closed the gap to 20-16 after a pair of free throws by Brendon Myles with 10:29 left.

The Aggies pushed the advantage into double digits, 30-20, after a Maye 3-pointer with 7:20 remaining and took their largest lead of the half, 43-29, after a Maye layup right before the break.

However, the Aggies answered and tied the game at 79 after a Kameron Langley layup with 45 seconds left.

News and Notes
> North Carolina A&T State extended the all-time series lead to 51-31
> Florida A&M has faced two nationally-ranked programs so far this season – #10 Seton Hall and No. 21 Tennessee
> FAMU picked up a signature victory on Dec. 31 against Iowa State (70-68)
> The Rattlers finally concluded its season-opening 13-game road swing on Monday night against North Carolina A&T State
> FAMU's first home game comes on Jan. 11, 2020 against MEAC opponent Morgan State
> Florida A&M has travelled a total of 23,530 miles to begin the season and will add another 538 miles when it makes the trip back to Tallahassee, Fla.

Up Next
Florida A&M will have its home opener on Saturday against Morgan State. Tip-off during Church and Community Appreciation Day is set for 4 p.m. from the Al Lawson Center.