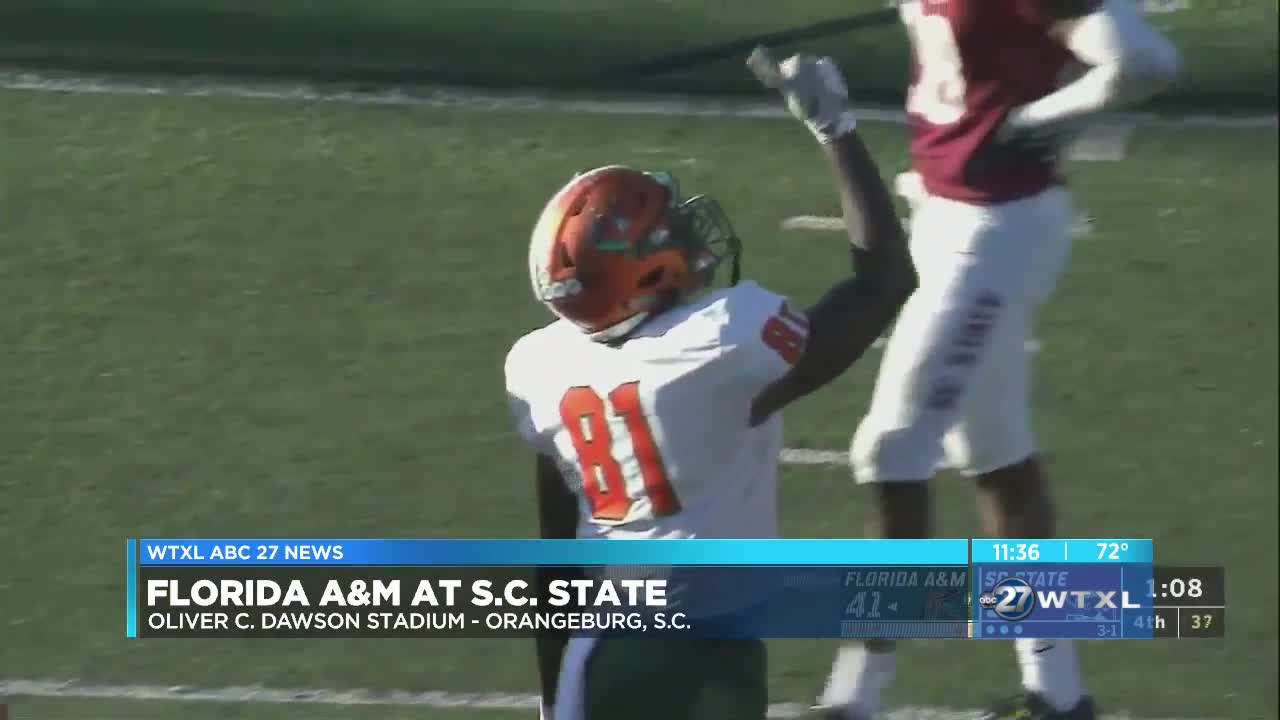 ORANGEBURG, S.C. — Ryan Stanley set another record and threw for a career-high 427 yards, including a 19-yard strike to Kamari Young with 1:08 left as the Florida A&M University football team snapped a 14-game losing streak with a 42-38 victory over South Carolina State in a Mid-Eastern Athletic Conference (MEAC) on Saturday afternoon at Oliver C. Dawson Bulldog Stadium.

The Rattlers (5-1 overall, 3-0 MEAC), who are off to the best start since the 2000 season, last defeated South Carolina State in 2011, but due to NCAA sanctions, that victory was vacated. The last time FAMU picked up a win over the Bulldogs was in 2001.

It took a defensive stop on fourth down to give the Rattlers good field position for their third drive of the afternoon.

Stanley finished off the 12-play, 64-yard drive with a short toss to the left side to Xavier Smith to give Florida A&M a 7-0 advantage with exactly four minutes remaining in the opening period.

The Florida A&M defense continued to show its toughness late in the first quarter as Terry Jefferson forced a fumble as Demontre Moore recovered the ball at the SCSU 40.

However, South Carolina State (3-2, 1-1) tied the game at 7 with 14:01 left in the first half when Stanley tried to make something out of nothing and BJ Davis picked off the senior quarterback and rumbled 88 yards for the score.

The Bulldogs grabbed their first lead of the day with 7:32 remaining.

Khaliq Anthony blocked a FAMU punt and Jaydon Brunson went eight yards into the endzone to give South Carolina State a 14-7 advantage.

The Rattlers answered the blocked punt with 69-yard, 10-play drive as Terrell Jennings scored on a 3-yard run, tying the game at 14 with just over four minutes left in the first half.

After forcing a South Carolina State punt, Florida A&M marched 68 yards in just four plays, taking 1:18 off the clock, as Xavier Smith caught a 24-yard pass from Stanley, giving the Rattlers a 21-14 lead with 12:30 remaining in the third.

Florida A&M extended the lead to 28-14 as Stanley connected with Azende Rey for a 63-yard gain. Two plays after the huge pick up, Jennings scored on a 3-yard touchdown run with 7:43 left in the third.

South Carolina State was able to move the football on its next drive, but had to settle for a 34-yard field goal by Dillon Bredsen to cut the deficit to 28-17 with 3:29 remaining in the period.

A Derrick Mayweather interception set the Rattlers up at the Bulldog 45. FAMU drove to the SCSU 21, but Stanley’s pass in the endzone was picked off by Jalen Barr.

South Carolina State wasted little time cashing in the turnover as the Bulldogs marched 80 yards in four plays as De’Montrez Burroughs caught a 13-yard touchdown pass from Corey Fields to cut the margin to 28-24 with 10:15 remaining.

The Rattlers answered the Bulldog scoring strike as Bishop Bonnett scored on an 18-yard touchdown run to push the lead to 35-24 with a little less than five minutes left.

The Bulldogs quickly answered as Fields connected with Shaqaun Davis for a 21-yard touchdown to trim the deficit to 35-30 with 3:42 remaining. The 2-point conversion attempt failed as Markquese Bell intercepted fields in the endzone, meaning South Carolina State would have to score a touchdown to win the game.

South Carolina State grabbed a 38-35 advantage after Deondre Daniels recovered a blocked punt in the endzone with 2:18 left.

That set the stage for the Rattlers to complete the rally.

South Carolina State’s kickoff rolled out of bounds and FAMU set up shop at the 50-yardline.

Davonne Kendrick rushed 11 yards and two yards on the drive. After an incomplete pass to Xavier Smith, Stanley connected with Davonne Kendrick for 18 yards. On the very next play, Kamari Young caught a 19-yard touchdown pass from Stanley to give FAMU a 42-38 lead with 1:08 left.

The defense was up to the task on the final drive and forced a turnover on downs to give FAMU the win.

Florida A&M returns home on Saturday, Oct. 19 to face off against North Carolina A&T State. Kickoff against the Aggies at Bragg Memorial Stadium is set for 6 p.m.