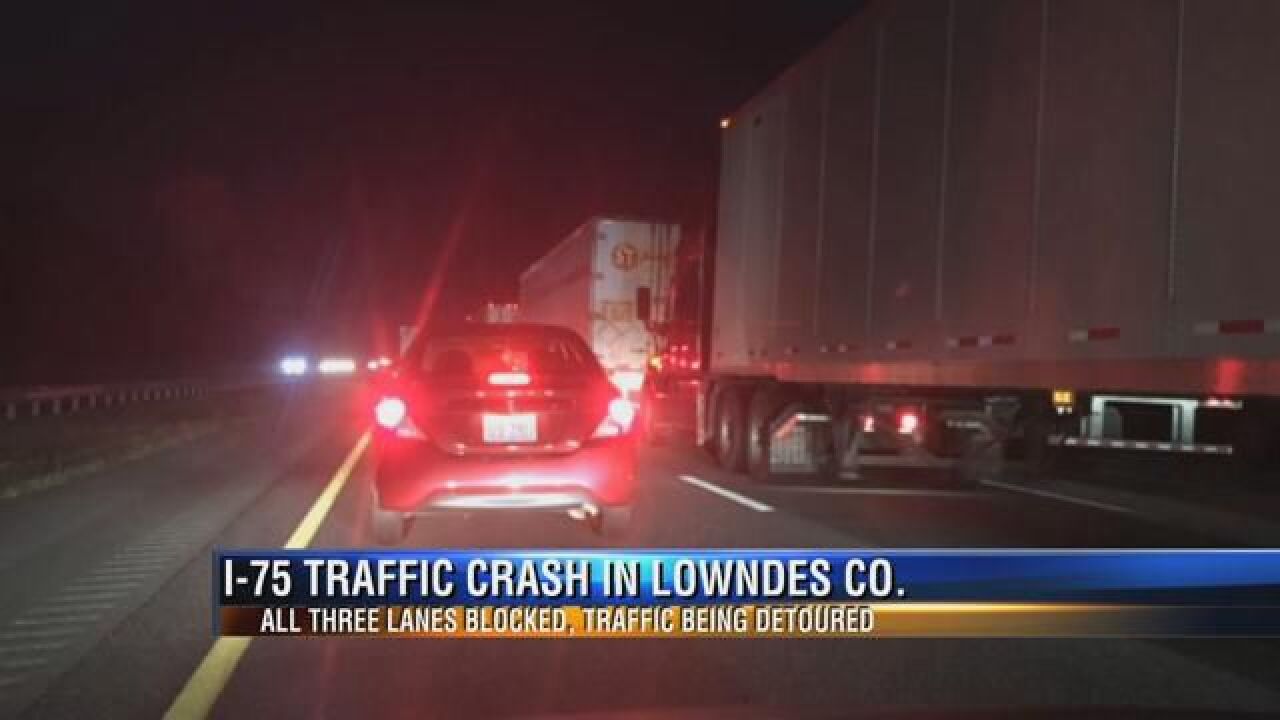 LOWNDES CO., GA (WTXL) - One person was airlifted with severe burns after a crash involving 4 tractor-trailers on I-75 South in Lowndes County.

The Georgia State Patrol says that on Thursday night a trooper was investigating a crash involving a 2004 Volvo VNL tractor trailer. The vehicle had apparently hit a guardrail near mile-marker 2, which pushed part of it into the southbound lane.

As traffic slowed due to the lane closure, 43-year-old Ivan Moreira of St. Petersburg FL failed to slow down and rear ended a 2017 Freightliner Cascadia tractor trailer.

Moreira’s truck then continued southbound and jackknifed, causing it to hit another tractor-trailer.

Trying to avoid the crash, a third tractor-trailer swerved off the west shoulder of the road and into west ditch.

Moreira’s vehicle then exploded, engulfing the cab with fire. GSP says Moreira sustained severe burns to his body and was air lifted to Shands Hospital in Gainesville Fl.

No other injuries were reported by the other three drivers.

Troopers do not suspect alcohol or drugs to be a contributing factor.

This crash is still under investigation with the assistance of Troop H SCRT. Charges are pending in this crash.

The wreck involving 4 tractor-trailers happened on the interstate Thursday evening.

More information will be released Friday.

LOWNDES CO., GA- As of early Friday morning. Georgia State Patrol, still working to clear a fiery crash that injured one and involved four tractor-trailers on I-75 South near mile marker 3 in Lowndes County.

According to GSP, a crash in the northbound lane pushed a guardrail into the southbound lanes leading to a wreck involving four tractor-trailers.

Cpl. Chris Kelch with GSP said that one tractor-trailer caught fire and the driver was air-lifted to the hospital.

The accident has all three lanes of southbound traffic closed from Exit 5 to Exit 2 and officials are working to clear the scene, but do not have an estimate as to when the lanes will be reopened.

One northbound lane is open, but troopers said traffic is flowing at this time.

Drivers are urged to avoid the area as officials work to investigate and clear the scene.