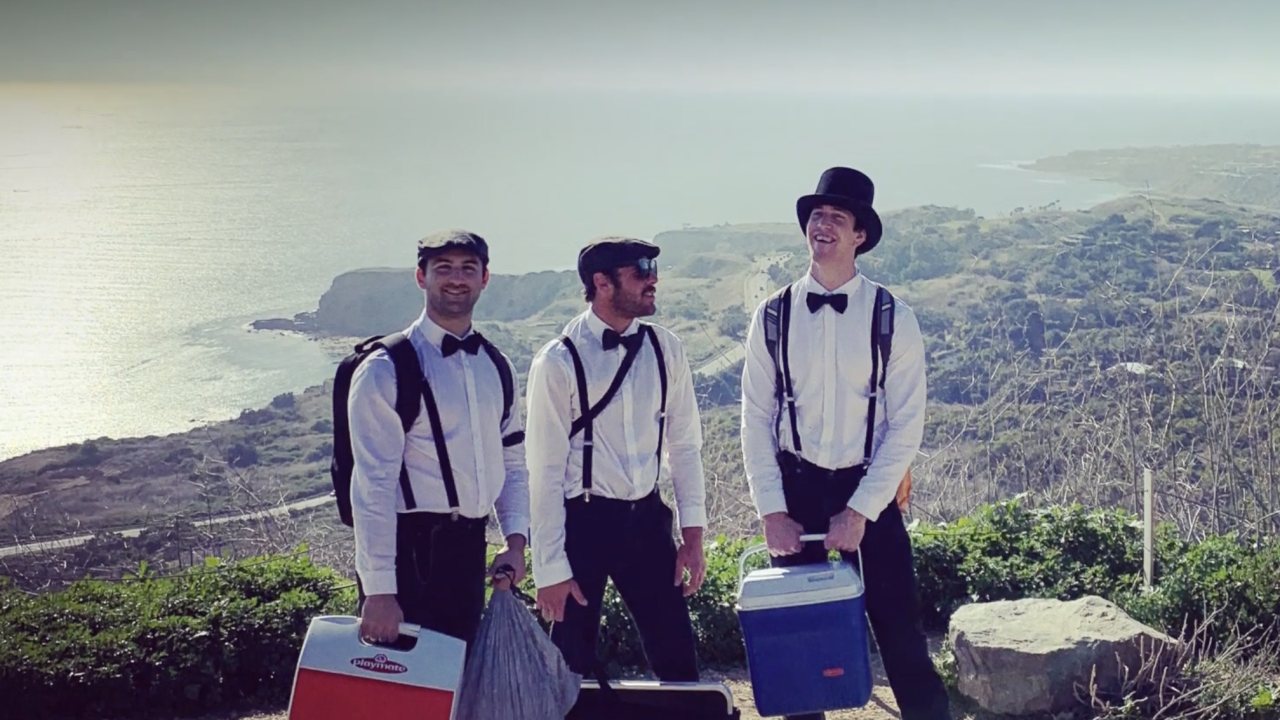 What if someone was magically able to greet you with a refreshing beverage at the end of a strenuous hike? It's not something you see every day, and has most people saying, “Only in LA.”

But that’s what David Weber, Jack Petros and Dylan Skolnik do. They formed the Summit Sippers , and even they say the concept is absurd.

Dressed in suspenders, and even top hats, the well-dressed trio sets up a table to hand out drinks to hikers, whether on top of a cliff, next to a waterfall or even in the snowy rocks of Yosemite.

“The reaction is what we do it for. The shock value is amazing, seeing people laugh is incredible,” said Weber, of the reaction they get from hikers.

It’s truly is incredulous. They bring the outfits, carry the table, haul the refreshments and then, set it all up, as if you were in a classy restaurant and not on the side of a mountain.

“The harder the hike, the bigger the surprise, when you think about us being up there with all the gear,” said Petros. “It’s like, ‘Wow, how did these guys get up here?’ It’s usually the common question. Is this a mirage of sorts?

“The look on these hikers faces when we hand them a beverage, priceless,” Skolnik said.

It is quite priceless. And free.

“We are so grateful. For people who want to express that, we ask them to do is pay it forward with some small act of kindness,” said Petros.

That's right, it’s free. This is not their day job. Weber is a web developer. Petros helps kids run their own alternative school, and Skolnik works for a motorized scooter company. So, this is purely a labor of hilarious love.

“Turning the bend around some pine trees and seeing guys in a top hat, suspenders and bow ties is a hilarious thing that doesn’t happen to most people,” said Weber.

Hikers have asked if the three are filming a movie or a commercial. One hiker even begged them to work a holiday party. But outside of the laughs, it's not the point.

“We realize, now more than ever, that we need community we need to stay together and build those relationships and bonds,” Petros said.

They stopped hitting the trail when the pandemic hit. Now, they're working on reemerging in a socially-distanced, secretive and surprising way.

“People from out of town hiking, saying, ‘oh, this is so typical LA,’ and that may be true, but we also think this has potential in other places outside of Southern California,” said Skolnik.

When we asked if they're headed for Mount Everest, they jokingly said that's next. Along with their goal of spreading the appreciation of nature, the bonds of community and pure joy to a nation who needs this kind of laughter.