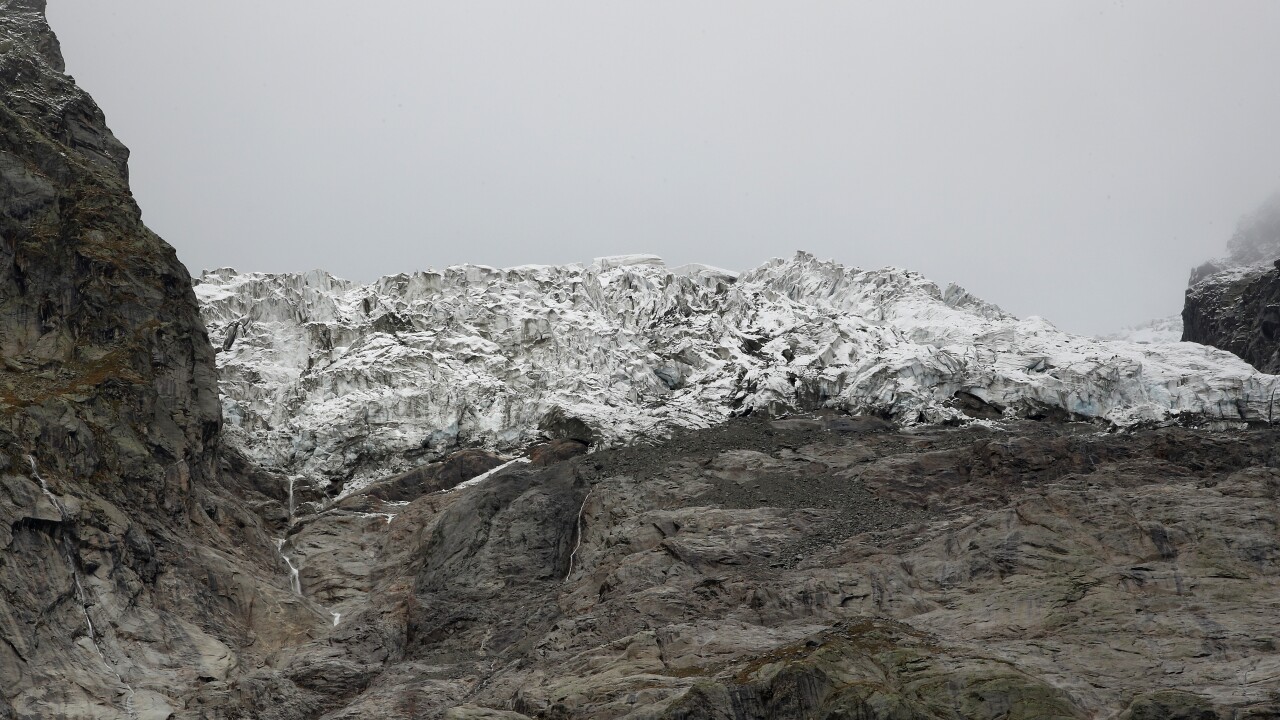 Copyright 2019 The Associated Press. All rights reserved
Antonio Calanni/AP
The Planpincieux glacier located in the Alps on the Grande Jorasses peak of the Mont Blanc massif, is seen from Val Ferret, a popular hiking area on the south side of the Mont Blanc, near Courmayeur, northern Italy, Wednesday, Sept. 25, 2019. Italian officials sounded an alarm Wednesday over climate change due to the threat that the fast-moving melting glacier is posing to the picturesque valley near the Alpine town of Courmayeur, the glacier, which spreads 1,327 square kilometers (512 square miles) across the mountain, has been moving up to 50 centimeters (nearly 20 inches) a day (AP Photo/Antonio Calanni)

Pink ice is causing the scientific community some concern. The Presena Glacier in northern Italy appears pink because of algae on it, which scientists say could speed up melting of the ice.

The Presena Glacier is in the Alps, just south of Italy’s border with Switzerland. While there is debate about where the algae came from, Biagio Di Mauro of Italy’s National Research Council told The Guardian the pink snow observed on parts of the Presena glacier is likely caused by the same plant found in Greenland.

A glacier in Italy is turning pink. The color is caused by algae growth — and scientists worry it will make the glacier melt faster, because darker colors absorb more radiation.

Past studies report 50% of ice in the Alps' glaciers will be gone by 2050 because of climate change. pic.twitter.com/cgGwWQcG81

“The alga is not dangerous, it is a natural phenomenon that occurs during the spring and summer periods in the middle latitudes but also at the Poles,” Di Mauro told The Guardian.

He says the amount of the algae this year is a marked increase, "there was quite an impressive bloom of snow algae," he told CNN about his trip to the glacier over the July 4 weekend.

The algae, Chlamydomonas nivalis, makes the ice pink and darker than normal. The darker ice absorbs more of the sun’s heat, rather than reflecting the rays back into the atmosphere, causing the ice to melt faster.

“Everything that darkens the snow causes it to melt because it accelerates the absorption of radiation,” Di Mauro told The Guardian.

Di Mauro has studied algae blooms in Switzerland, too. He told CNN another kind of algae has turned some ice purple in that country.