"My brother was about peace," Terrence Floyd said. 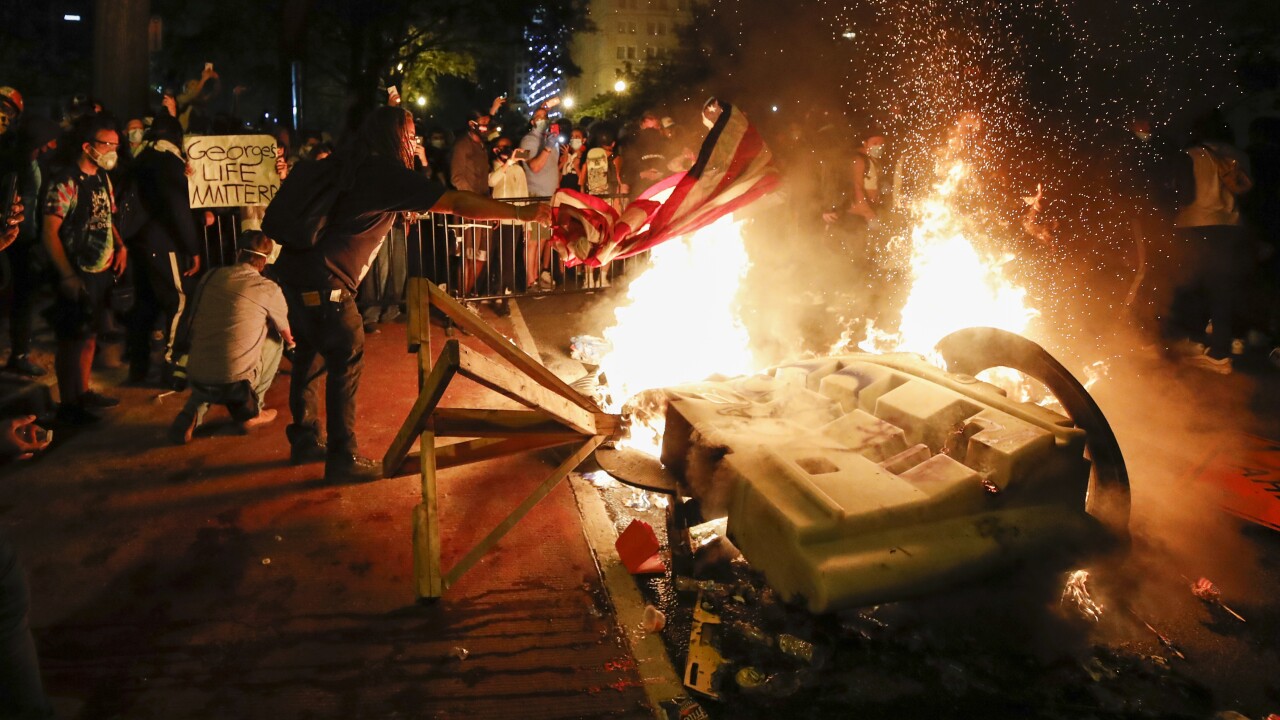 Alex Brandon/AP
Demonstrators start a fire as they protest the death of George Floyd, Sunday, May 31, 2020, near the White House in Washington. Floyd died after being restrained by Minneapolis police officers (AP Photo/Alex Brandon)

The younger brother of George Floyd is pleading with protesters not to "tear up your town" as violent demonstrations have taken place in numerous cities across the country.

In an interview with ABC News' Alex Perez on Sunday night, Terrence Floyd said that he understands why people are angry, but he worries his brother's memory will be overshadowed by the destructive protests.

"[S]ometimes I get angry, I want to bust some heads, too," Terrence Floyd said. "I wanna ... just go crazy. But I’m here. My brother wasn’t about that. My brother was about peace. You’ll hear a lot of people say he was a gentle giant."

Speaking to "Good Morning America" co-anchor Robin Roberts on Monday morning, Terrence Floyd said his brother "would want us to seek justice" but to channel the anger "another way."

"It's OK to be angry, but channel your anger to do something positive or make a change another way because we've been down this road already," he said. "The anger, damaging your hometown is not the way he'd want."

Following his death, protests in Minnesota have spread across the country. Some have resulted in vandalism and destruction of property, with many cities issuing curfews in response.

"Don’t tear up your town, all of this is not necessary because if his own family and blood is not doing it, then why are you?" he told ABC News. "If his own family and blood are trying to deal with it and be positive about it, and go another route to seek justice, then why are you out here tearing up your community? Because when you’re finished and turn around and want to go buy something, you done tore it up. So now you messed up your own living arrangements. So just relax. Justice will be served."

Terrence Floyd said his brother was known around the community for his "positivity" and "motivation," which "is how he should be remembered."

"Do something positive. Stop making excuses," he said. "And that’s what I feel is going on: They’re using this as an excuse to be stupid."

On Friday, Chauvin was charged with third-degree murder and second-degree manslaughter in George Floyd's death. Terrence Floyd wants to see justice served for the other three officers who also responded to the scene.

"I want to see all of them get punished to the full extent for what they did to my brother," Terrence Floyd said. "Because when I saw the videos, not only was the dude on his neck ... not only that, you got the other three officers behind the camera, behind the car on him. So he can’t move."

Terrence Floyd said on "GMA" that he is traveling from his home in New York City on Tuesday to visit the site in Minneapolis where his brother drew his last breath.

"I just want to feel my brother's spirit," he said. "Just connect with him again."

The Rev. Kevin McCall and other civil rights activists from the New York City area will be joining Terrence Floyd on that trip to "call for peace and unity."

"We can be able to call for justice, but we need peace as well," McCall said. "Nobody is more angry than the family."