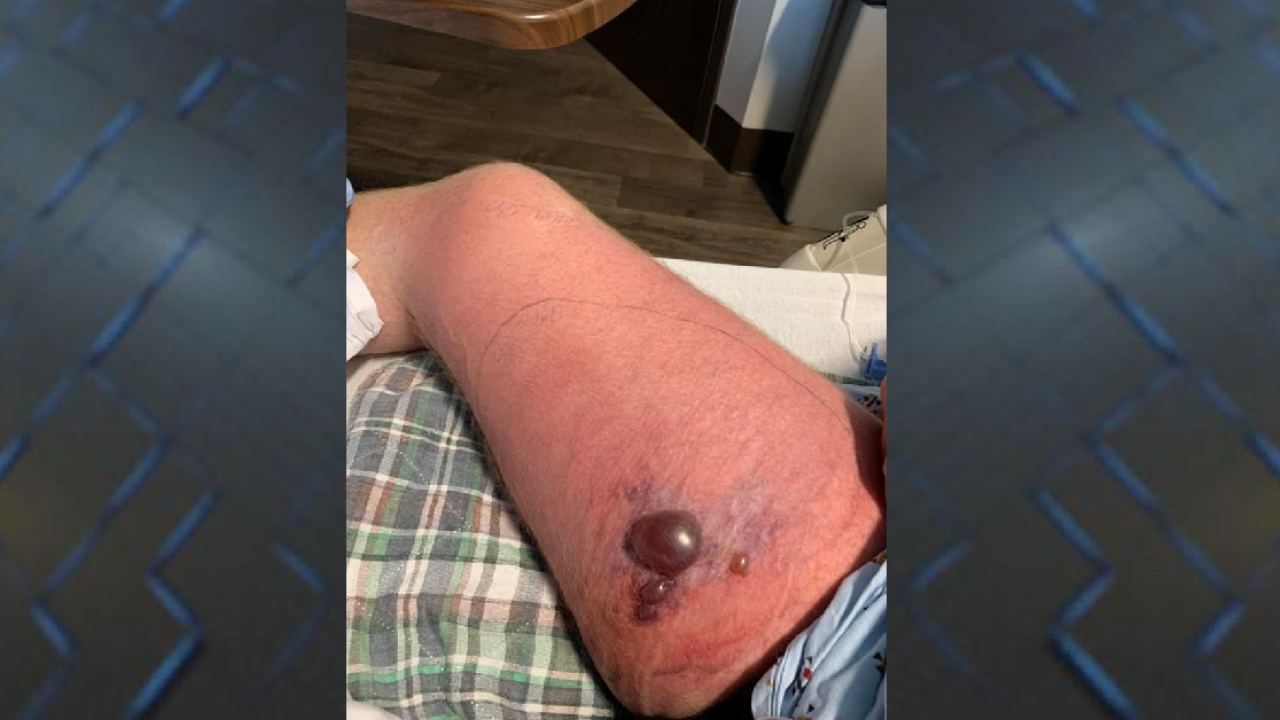 FLORENCE, Ala. (WTXL) — An Alabama man is recovering after his family says he contracted flesh-eating bacteria in the Tennessee River.

She wrote that Ricky had come home with a high fever and sore legs on Monday, July 8. However, Cassey says Ricky shrugged it off as leg cramps from working in the heat and went to work the next day.

When he came home, Ricky again came home with a fever and could barely walk.

" When he undressed he found his leg was red and swollen," Cassey wrote. " We immediately went to the ER ... and they told us it was cellulitis possibly contracted from our kayaking trip Saturday and treated him with iv [sic] antibiotics and sent him home with two more. They told him if there was any change to come back. "

The next morning, Ricky was running a temperature of 105 degrees and the irritation on his leg was spreading quickly, so they headed back to the emergency room.

Suspecting flesh eating bacteria as the root cause, health officials ran some tests, initially coming back with a negative results.

"They finally called in an infectious disease doctor and a surgeon," Cassey wrote. "The surgeon said that from his experience with necrotizing fasciitis he does not feel like this is what he has!"

However, according to WAAY , Ricky had surgery to remove a portion of his leg that was infected and the hospital confirmed it was necrotizing fasciitis. The outlet reports that the Alabama Department of Public Health did not have details on Ricky's case and said they don't report or keep up with individual flesh-eating bacteria cases.

Cassey shared a warning to those following her story on Facebook:

The disease develops from Vibro vulnificus bacteria, which the CDC says naturally lives in certain coastal waters and is present in higher concentrations between May and October when water temperatures are warmer. It can be contracted through open wounds and can, rarely, be contracted without your skin being broken.

WAAY reports that Ricky has made it through the worst part and could be home in about a week. According to the National Center for Biotechnology Information , necrotizing fasciitis is fatal for 26.6 percent of those diagnosed with the disease.

If you've been injured in the water, wash and disinfect the wound. Make sure to also keep an eye out to see if the wound gets worse after exposure. Early symptoms include swelling, redness and intense pain.

Flesh-eating bacteria can also enter the skin through bug bites. It is rare, but officials urge people to keep an eye on any bug bites to see if they get significantly worse over time